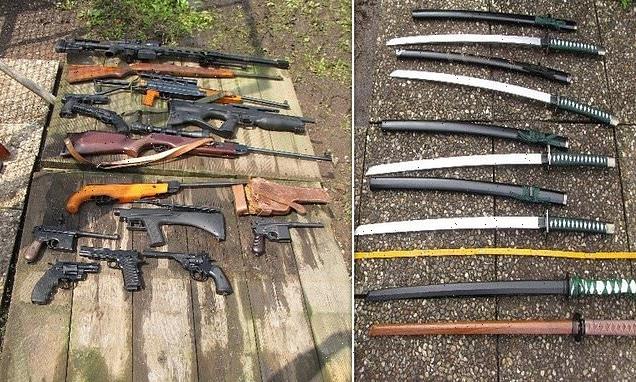 An Irish man with a huge arsenal of weapons has been arrested in Germany after allegedly writing to authorities warning he intended to carry out an attack.

The man, reported to be 53, was caught with firearms including gas and air guns, samurai swords, crossbows and daggers, according to Germany’s Bild newspaper.

Authorities in the German state of Hessen found the weapons haul in the city of Frankfurt, and are believed to have prevented an attack. 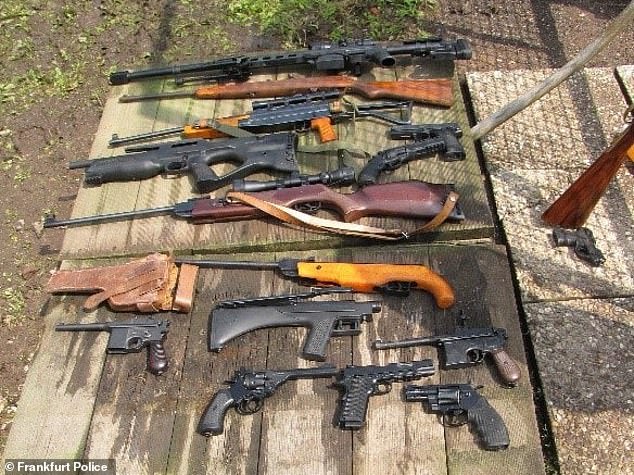 Pictured: A large stash of guns discovered by Frankfurt police in Germany after tracking down a 53-year-old Irishman who was suspected of plotting an attack on authorities and courts

The unnamed Irishman had previously sent large numbers of handwritten letters with ‘confused, regularly incomprehensible content to various – especially Hessian – authorities and courts,’ according to the police, cited by Bild.

Officials and the public prosecutor’s office said in the letters he complained ‘about alleged injustices by government agencies’.

They also said that judging by his writing, the man may be involved with the ‘Reich Citizens and Self-Governing Scene’ – a far right group often with antisemitic views that does not recognise the Federal Republic of Germany.

According to dw.com, it would not be the first time someone with connections to the group has been found stockpiling weapons, with a report from 2018 saying that members are seen as being ready and willing to commit ‘serious acts of violence’.

Police have found large stashes of weapons and ammunition during searches on homes, and in some cases been attacked by members of the ‘Reich Citizens’ as they raided homes in search of such arsenals.

In the case of the Irishman, the situation is said to have escalated on July 12, with the man writing in several letters to numerous authorities that he was planning an attack on July 20, according to Bild. 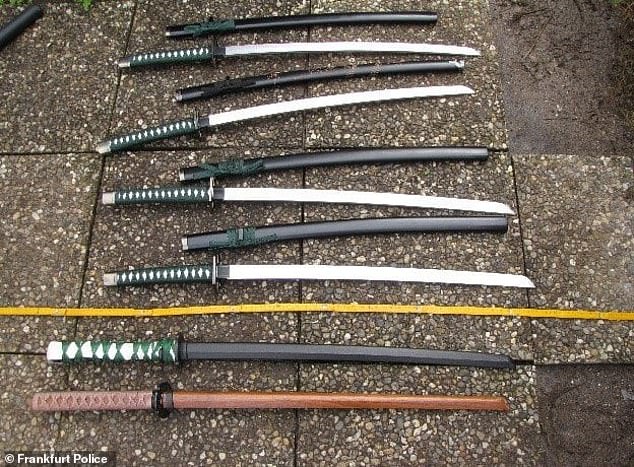 Pictured: A number of samurai swords found in the police raid. Authorities in the German state of Hessen found the weapons haul in the city of Frankfurt

In response, officers tracked him down on July 15 to a garden plot in northern Frankfurt and arrested him.

Days later, officers searched the neglected site, finding a construction trailer, several steel containers and cars, along with the weapons and other ‘items that are suitable for an inspection of the announced attack’.

Pictures from the raid released by Frankfurt Police showed over a dozen firearms laid out on a table, and at least six katana-style swords in a row on the pavement.

The man, whose identity is yet to be disclosed, is now in custody accused of preparing a series act of violence that endangers the state, the newspaper said.