A mother has hit out at the ‘disgusting’ dinner served at a Scottish primary school – branding it ‘s***’ that she ‘wouldn’t even serve to her dog’.

Gemma O’Grady, 38, shared a photo of her daughter Caisey’s lunch at St Pius Primary in Dundee, Scotland, sparking a wave of appall on Facebook, with one user labelling it ‘prison food’.

The youngster was served two ‘raw looking’ cooked sausages, two lumps of boiled potato, beside an glob of ‘dessert’ and a plastic cup of milk on the side.

Ms O’Grady has now promised her daughter she’ll make her packed lunches to take to school.

Dundee City Council confirmed they were in discussions with the contractors about the food. 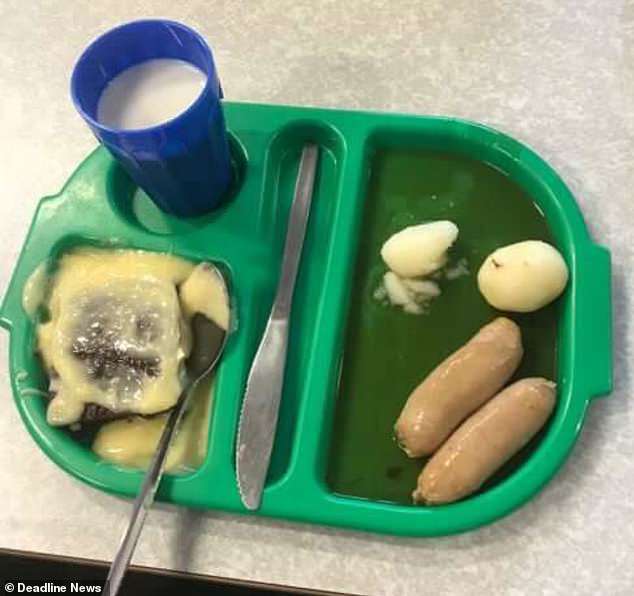 Under the name Gemz OG, the mother posted: ‘Not even joking this is the s**** St Pius primary school is dishing out too the kids.’

Referring to the pupil who received the meal, she added: ‘It’s no wonder she asks for money every single day to go to shops with her pals.

‘She is certainly not eating that. Packed lunches as of now.’

In a later post, she added: ‘Thanks guys it’s a f****** disgrace putting that s*** down to hungry/growing children.

‘I honestly wouldn’t give that too my dog.

‘A complaint has been put forward to Tayside Contracts and fingers crossed they get this sorted as I for one do not have money to give her daily for the shops, but as of now it will most definitely be packed lunch (made by me).’

Gemz OG posted a screenshot of Cllr Roberts reply. It stated: ‘I’ve passed your complaint to Tayside Contracts and will get back to you when I get a report back. They supply the food to the schools and cooks in the school.’ 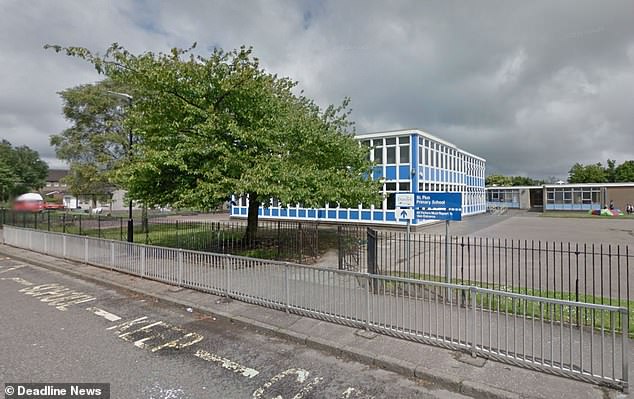 The appalling school dinner was served to pupils at the St Pius Primary in Dundee, Scotland

Charlene Taylor wrote: ‘Some poor kids are starving and that s*** is probably all they’re getting. I honestly can’t believe they’re putting that down to kids in this day and age.’

Leanne Carty said: ‘No wonder my kids come in from school everyday saying they are starving. I wouldn’t eat that s*** if that was put in front of me.’

Paul Blackley commented: ‘That’s not food. Whoever supplies this so called food should be shut down and the council should be ashamed for letting this go unnoticed. Disgrace.’

Kerry Simpson wrote: ‘Oh my I can’t believe an adult would actually serve that out to anyone. They sausages look raw.That’s not even a meal, I’m shocked. So glad Kaydyn goes to pack lunch. I’d take this further and get in to speak to the head teacher too.’

A spokeswoman for Dundee City Council confirmed the picture was genuine said: ‘We are in discussions with Tayside Contracts about this.’ 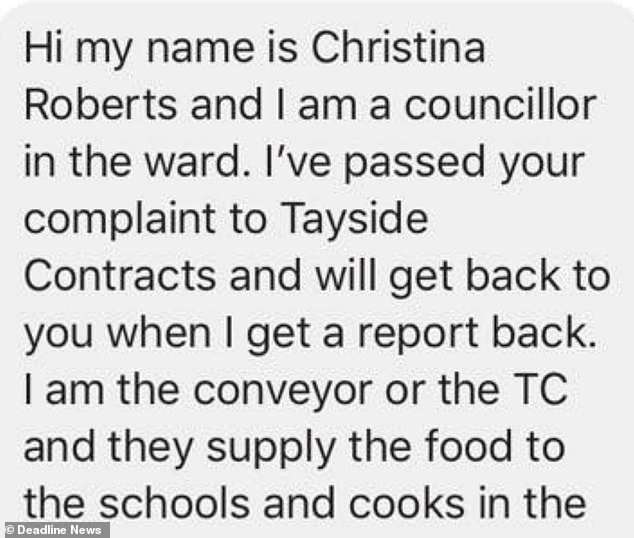 A spokeswoman for Tayside Contracts said: ‘Our menus and recipes are produced by a dedicated menu development team and involve a consultation process which includes pupils and other key stakeholders.

‘Pupils choose which elements of this meal are put on their particular plate.

‘Our sausages and burgers are made to a bespoke specification by our butcher and are reduced fat and salt to ensure they are a healthier option to reflect the requirements of the Scottish Government.

‘Tayside Contracts quality management system is designed to ensure a high quality meal is produced across the school meals service.

‘If there are issues with meals identified, these are fully investigated and resolved.’