Israel has launched an air-raid on a Hamas base after the group claimed 50 of its members were among the 63 Palestinians killed at recent border protests.

The air strike hit ‘terrorist infrastructure and weapons-making facilities’ in the Gaza Strip after gunfire from the territory targeted soldiers, according to Israeli officials.

It comes after deadly clashes erupted along the border earlier this week as America opened its new embassy in Jerusalem. 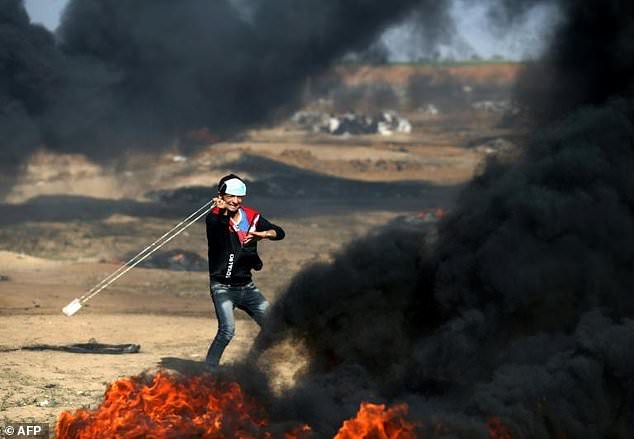 Israel has launched an air-raid on a Hamas base after the group claimed 50 of its members were among the 63 Palestinians killed at recent border protests. Pictured: A Palestinian youth hurls a stone during clashes with Israeli forces on May 15

The death toll has led to international condemnations of Israel and calls for an independent investigation.

But Israel rejects those calls, saying its actions are necessary to stop mass infiltrations from the blockaded Palestinian enclave controlled by Islamist movement Hamas.

On Wednesday, Israeli officials seized upon remarks by a senior Hamas member who said 50 of the Palestinians killed this week were members of the group, arguing it showed the protests were not peaceful.

But the Hamas official, Salah Bardawil, did not give further details about whether they were members of the group’s armed or political wing, or what they were doing at the time they were killed.

Another Hamas official did not confirm the number, but said those participating were demonstrating peacefully.

The protests, which have seen unsuccessful attempts to break through the fence, have dwindled since Monday, and the start of fasting for the Muslim holy month of Ramadan on Thursday may further lessen interest.

Friday – when the protests usually peak – will be a key test over whether the current round of unrest will continue on any level.

The demonstrations were initially meant to end on May 15, but Hamas officials have said they want them to continue. 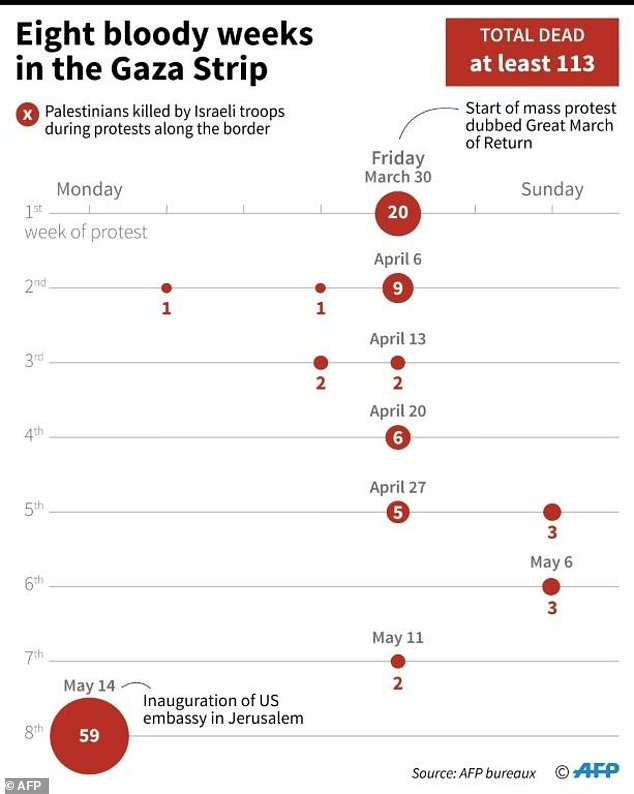 Some 116 Palestinians have been killed since the protests began in March. One Israeli soldier has been reported wounded

Some 116 Palestinians have been killed since the protests began. One Israeli soldier has been reported wounded.

The overnight raid by Israel came after it said gunfire from Gaza targeted its soldiers and damaged a house. No one was hurt by the gunfire.

‘The Israeli army struck targets belonging to Hamas in the northern Gaza Strip, including terrorist infrastructure and weapons-making facilities,’ the military said in a statement.

Palestinian security sources confirmed the target was a Hamas base, saying there were no reports of injuries.

Hamas in a statement on Thursday signalled it could resort to its weapons in response to this week’s violence, but many analysts see the possibility as unlikely for now.

‘We stress to the Zionist enemy and its leaders that the resistance movements whose people are participating in this peaceful movement with all awareness and concern for our people can respond with all force,’ it said. 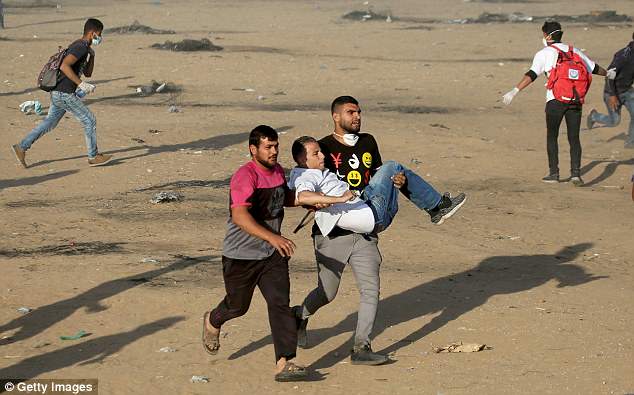 Israel has sought to fend off international criticism over Monday’s violence, with the United States strongly backing its close ally and blaming the deaths on Hamas

Arab foreign ministers are to hold an extraordinary meeting Thursday in Cairo to discuss the border violence.

The meeting comes after Egyptian President Abdel Fattah al-Sisi on Wednesday said Cairo was in communication with both sides ‘so that this bloodshed would stop’.

Hamas’s leader in the Gaza Strip, Yahya Sinwar, told Al-Jazeera on Wednesday that the Egyptians ‘support the right of our people to struggle and the right of return, and stressed their keenness not to allow these marches to degenerate into an armed military confrontation.’

Israel has sought to fend off international criticism over Monday’s violence, with the United States strongly backing its close ally and blaming the deaths on Hamas.

There have been numerous calls for an independent investigation into the deaths, with Britain, Germany, Canada and Switzerland among those supporting such action.

UN Secretary-General Antonio Guterres and the European Union have also called for an independent probe.

A bitter row over the deaths has erupted between Israeli Prime Minister Benjamin Netanyahu and Turkish President Recep Tayyip Erdogan, a strong backer of the Palestinian cause.

Israel accuses Hamas, with whom it has fought three wars since 2008, of seeking to use the demonstrations as cover to carry out violence.

It says those approaching the fence have used explosive devices and firebombs, while soldiers have been shot at.

The military said in reference to Monday’s deaths that ‘it appears that at least 24’ of those killed were militants, mainly from Hamas and Islamic Jihad.

Palestinians and rights groups say protesters are being shot while posing no threat to Israeli soldiers on the other side of the heavily guarded fence.

Hamas denies Israeli claims that it orchestrated the demonstrations, saying it supports them but that they were organised independently.