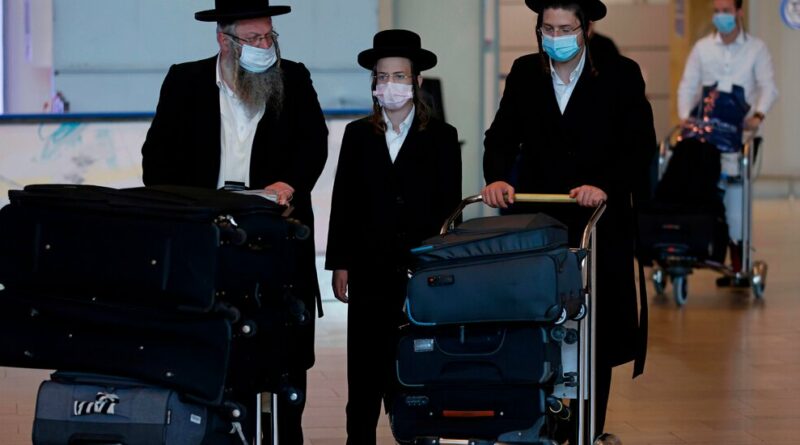 JERUSALEM — More than 150 Israelis suspected of using fake negative coronavirus test results to board flights home after a pilgrimage to Uman, Ukraine, have been summoned for questioning by the Israeli police in accordance with a strict, new government directive.

Offenders could be charged with fraud, forgery and spreading disease in aggravated circumstances, the Ministry of Public Security warned in a statement this weekend — criminal offenses that can lead to prison sentences of up to five years.

About 25,000 to 30,000 Israelis, most of them male Hasidic Jews, traveled to Uman to celebrate the Jewish New Year last week with a visit to the burial site of a revered 18th-century rabbi, Nachman of Breslav. Israel’s Health Ministry reported late last week that dozens of them had arrived back in Israel infected with the virus despite carrying documents indicating that they had tested negative.

Prime Minister Naftali Bennett’s office said in a statement that it “views with utmost gravity” the entry of people with forged documents, “willfully spreading a disease,” adding that severe action would be taken against offenders.

Israel is one of the world’s most vaccinated countries, but its coronavirus caseload recently spiked to a pandemic high, according to the Our World in Data Project at Oxford University. Cases have dropped sharply over the past 10 days, which officials attribute to their rollout of booster shots to about a third of the population of nine million. Still, deaths have risen to about 42 percent of the country’s highest toll, which was reached in late January.

Dr. Sharon Alroy-Preis, a senior official in Israel’s Ministry of Health, told public radio that there were at least 1,500 verified cases among the more than 17,000 pilgrims who returned to from Ukraine on Thursday and Friday. The Ministry of Public Security said on Sunday that at least 154 of the recent arrivals had been summoned by the police for questioning after the end of their 10-day period of home quarantine.

Magen David Adom, Israel’s ambulance service, had set up two sites in Ukraine in cooperation with the Ukrainian Red Cross to offer rapid molecular tests for the returnees, one at the airport in the capital, Kyiv, and one near the rabbi’s tomb in Uman,. Negative results would allow them to board flights home.

The problem, Dr. Alroy-Preis said, was that some who tested positive at the sites “hid” their results, and acquired fraudulent negative PCR test results elsewhere. Some of those travelers, she said, canceled their direct flights back to Israel, aware that Magen David Adom would have passed their names on to the airlines. Instead, they arrived in Israel via connecting flights.

But the names of all those who had tested positive at the two sites in Ukraine were also known to Israel’s immigration authorities, enabling those travelers to be identified on arrival. Israel in any case does not rely on tests carried out abroad and anybody landing in Israel is tested before leaving the airport.