Israel’s parliament votes to dissolve itself and hold a new election, which is likely to take place in September. 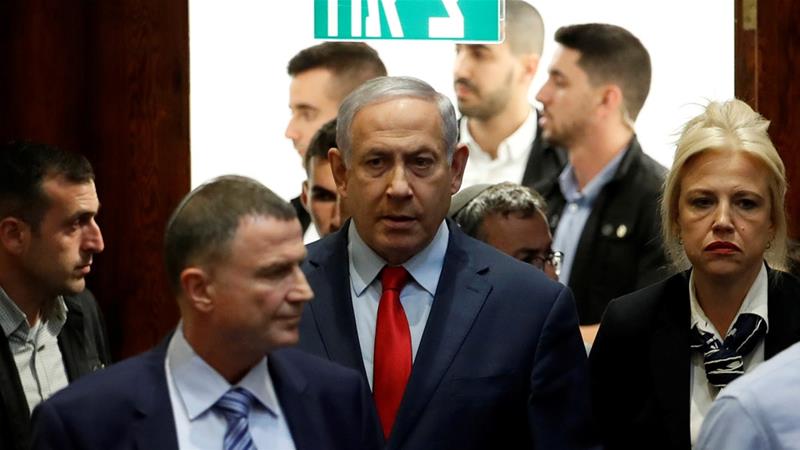 Israeli legislators have voted to dissolve parliament and set the country on the path to a second election within months, after right-wing Prime Minister Benjamin Netanyahu failed to put together a ruling coalition before a midnight deadline.

In April, Netanyahu appeared set for a fifth term as prime minister after his Likud Party won 35 of the 120 seats in the parliament, even though he faces possible indictment in three corruption cases. He has denied any wrongdoing and accused his opponents of mounting a witch-hunt.

But despite weeks of negotiations he failed to overcome divisions between secular and religious allies and in the early hours of Thursday, parliament voted by 74-45 to dissolve itself.

The unprecedented vote was prompted by Netanyahu’s failure to reach a coalition deal even though his party and its allies won a majority in the April 9 election.

The move prevents the scenario of Israeli President Reuven Rivlin selecting another person to try to form a government, but also sends the country into what is likely to be another divisive campaign before a fresh vote that is expected to take place in September.

“We will run a sharp, clear election campaign which will bring us victory. We will win, we will win and the public will win,” Netanyahu told reporters after the dramatic vote.

Opposition leader Benny Gantz said that instead of following procedure, Netanyahu opted for “three crazy months” of a new campaign and millions of wasted dollars over new election because he is “legally incapacitated” by looming indictments.

“There is no other reason,” Gantz said.

The main obstacle to forming a government was a dispute between two of Netanyahu’s prospective coalition partners over a military conscription draft law.

The religious parties do not want young Ultra-Orthodox men to be forced to serve in the military and vehemently opposes the bill, but Avigdor Lieberman made the passage of the bill a condition for his secular nationalist party to join the government.

Reporting from West Jerusalem, Al Jazeera’s Harry Fawcett said Netanyahu worked until the deadline but failed to find a formula that would have given him a majority in parliament.

“The scenes in the Israeli parliament today have been quite astounding. Benjamin Netanyahu was trying all he could to avert this situation, even offering the centre-left Labour Party positions in the government. They rejected that. He tried at the last minute to get his longtime political associate Avigdor Lieberman on board.

“Netanyahu eventually decided that his best option was to go to another election, rather than allow the president to try to get somebody else to potentially form a coalition instead.”

Yossi Mekelberg from Chatham House told Al Jazeera it’s difficult to predict whether the new election will be any different from the last one, adding that Netanyahu is determined to stay in power to protect himself from various corruption allegations against him.

“The issue of the draft, the coalition agreement – I think it’s a sideshow to the main thing, which is the future of Netanyahu. The entire political system in Israel was hijacked by the interests of one person, one family, which is the Netanyahu family,” Mekelberg said.

“Netanyahu and his allies decided come what may they will undermine Israel’s democracy. It will take someone brave, probably within the Likud party, to say ‘enough is enough’. If he goes, the arithmetic changes dramatically and will open up other options.”