TEL AVIV, Israel (AP) — Former Israeli Prime Minister Benjamin Netanyahu appeared headed toward victory Wednesday, with 80% of the ballots from national elections counted and showing that voters gave him and his far-right allies what looks like a stable majority in the country’s parliament.

Votes were still being counted and results were not final. But if preliminary indications were correct, Israel was potentially headed to its most right-wing government, bolstered by a strong showing from the ultranationalist Religious Zionism party, whose members use inflammatory anti-Arab and anti-LGBTQ rhetoric.

The initial results pointed to a continued rightward shift in the Israeli electorate, further dimming hopes for peace with the Palestinians and setting the stage for possible conflict with the Biden administration and Israel’s supporters in the United States.

The early results also showed that Netanyahu had overcome his detractors, who claimed he was not fit to rule while on trial for corruption and have refused to sit with him in government. Netanyahu's partners have promised to help him evade a conviction.

“We are on the verge of a very big victory,” Netanyahu, 73, told supporters at a gathering in Jerusalem early Wednesday. “I will establish a nationalist government that will see to all Israeli citizens without any exceptions.” 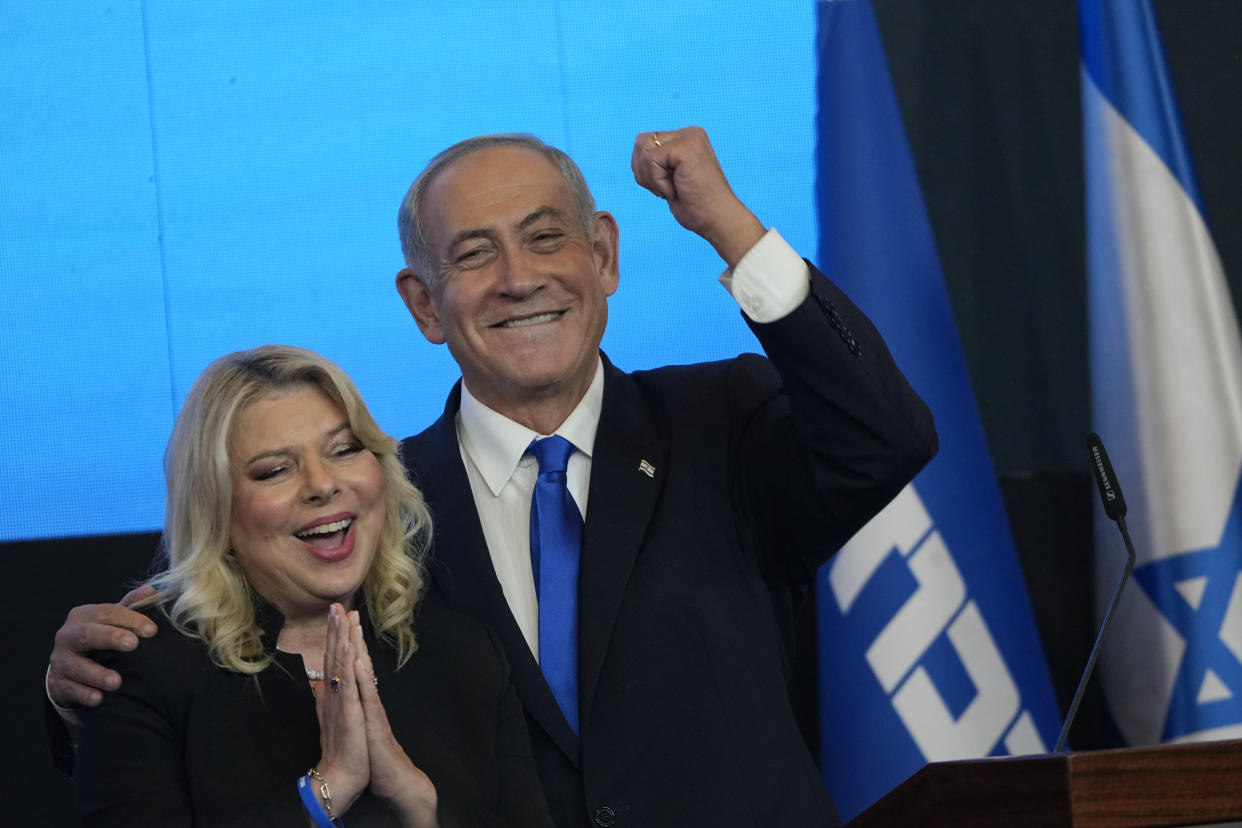 Elections officials worked through the night tallying votes and by Wednesday morning, nearly 80% of the ballots had been counted. The vote, like past elections, was tight but initial indications showed Netanyahu was headed back to the premiership with a firm majority in Israel’s 120-seat parliament.

With Netanyahu and his allies projected to win more than the 61-seat majority needed to form a government, the country’s protracted political crisis may be headed toward a conclusion, but the country remains as divided as ever.

Tuesday’s election was Israel’s fifth in less than four years, with all of them focused largely on Netanyahu’s fitness to govern. On trial for a slew of corruption charges, Netanyahu, who denied wrongdoing, is seen by supporters as the victim of a witch hunt and vilified by opponents as a crook and threat to democracy.

Even if Netanyahu and his allies emerge victorious, it could still take weeks of negotiations for a coalition government to be formed.

Netanyahu was Israel’s longest-serving prime minister, governing for 12 consecutive years – and 15 years altogether – before he was ousted last year by a diverse coalition led by the centrist Yair Lapid, the current caretaker prime minister.

But the coalition that Lapid cobbled together, which included the first Arab party ever to join a government, was decimated by infighting and collapsed after just one year in power. Those parties were poised to capture about 50 seats, according to initial results. 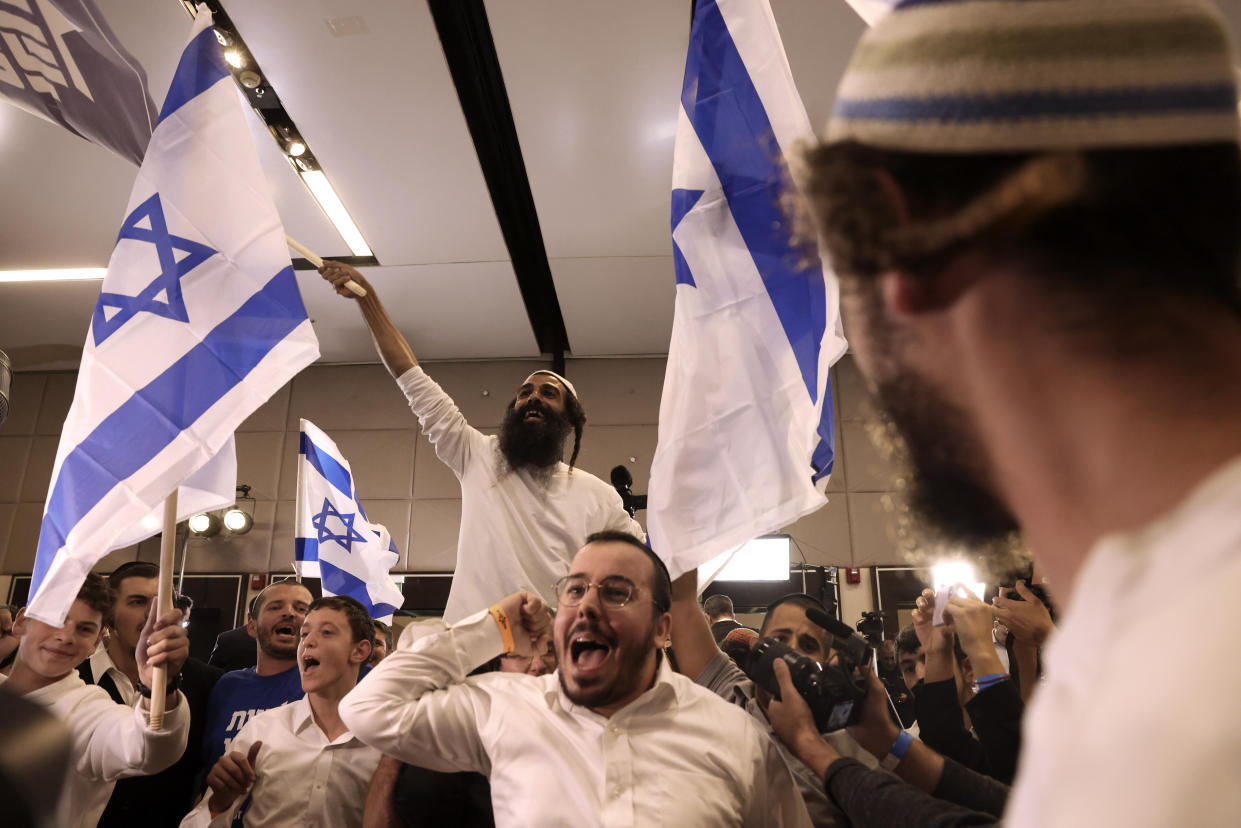 Lapid, addressing supporters early Wednesday, insisted that the race was not decided.

“Until the last envelope is counted, nothing is over and nothing is final,” he said.

The night’s strongest showing was by far-right lawmaker Itamar Ben-Gvir’s Religious Zionism, which emerged as the third-largest party. At an all-male campaign gathering in Jerusalem, religious men wearing Jewish skullcaps and waving Israeli flags danced in celebration. At the celebration, Ben-Gvir’s supporters chanted “Death to terrorists.”

Ben-Gvir is a disciple of a racist rabbi, Meir Kahane, who was banned from parliament and whose Kach party was branded a terrorist group by the United States before he was assassinated in New York in 1990.

But while Kahane was seen as a pariah, Ben-Gvir is one of Israel’s most popular politicians, thanks to his frequent media appearances, cheerful demeanor, knack for deflecting criticism and calls for a harder line against Palestinians at a time of heavy fighting in the occupied West Bank. Young ultra-Orthodox men are among his strongest supporters.

Ben-Gvir lives in the hard-line West Bank settlement of Kiryat Arba and is a strong proponent of settlement construction. He has described Arab colleagues in parliament as “terrorists,” called for deporting those who are “disloyal” and recently brandished a handgun in a tense Palestinian neighborhood of Jerusalem as he called on police to shoot Palestinian stone-throwers.

“We want to make a total separation between those who are loyal to the state of Israel — and we don’t have any problem with them — and those who undermine our dear country,” he said. 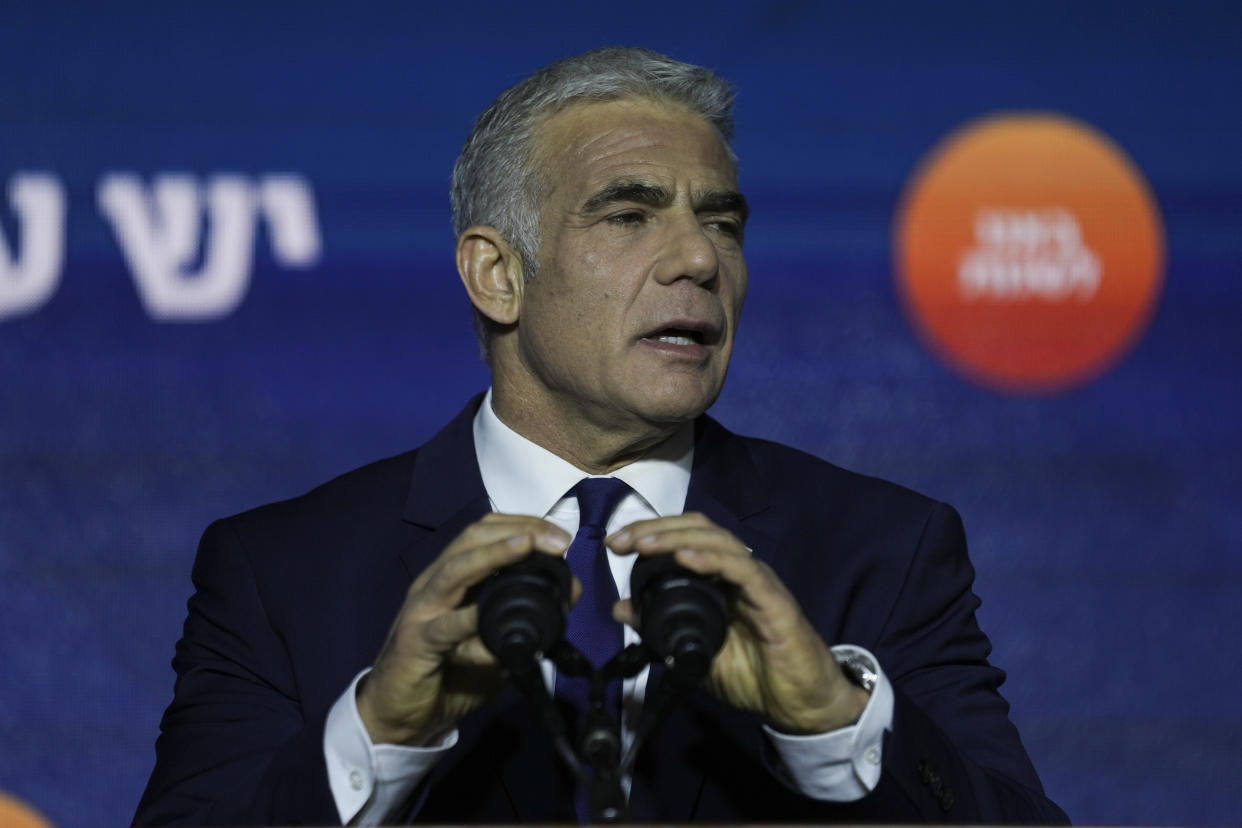 Muhammad Shtayyeh, the Palestinian prime minister, said the rise of Israel’s far right was “a natural result of the growing manifestations of extremism and racism in Israeli society.”

It appeared as though two of the three parties representing the country's 20% Palestinian minority earned enough votes for a spot in parliament, as polls had predicted.

But it was unclear whether Meretz, a dovish party that opposes Israel's occupation of the West Bank and a member of the current coalition, would make it into parliament.

If the Netanyahu alliance ends up controlling a majority, Ben-Gvir and his party leader, Bezalel Smotrich, are sure to drive a hard bargain. Ben-Gvir has said he will demand the Cabinet post overseeing Israel’s police force.

The pair have also said they will seek legal reforms aimed at weakening the independence of the judiciary and giving parliament power to override court decisions they don’t like. That could clear the way for the dismissal of criminal charges against Netanyahu. Smotrich and other members of the party have also made repeated anti-LGBTQ comments.

Such positions could put a future Netanyahu government on a collision course with the Biden administration, which supports a two-state solution with the Palestinians. It could also alienate Israeli allies in the U.S., particularly the predominantly liberal Jewish American community.

In Israel, voters vote for parties, not individual politicians. No party has ever won a majority on its own, and coalition-building is necessary to govern.

Tensions meanwhile rose Wednesday as a Palestinian slammed his car into an Israeli army officer near the Maccabim checkpoint between Jerusalem and Tel Aviv. The soldier, seriously injured, opened fire on the man, the military said. The Palestinians said the suspected attacker, Habas Abdel Hafeez Yousef Rayan, 54, died soon after.