Home » World News » It WILL be a White Christmas! Snow set to fall across Wales and north 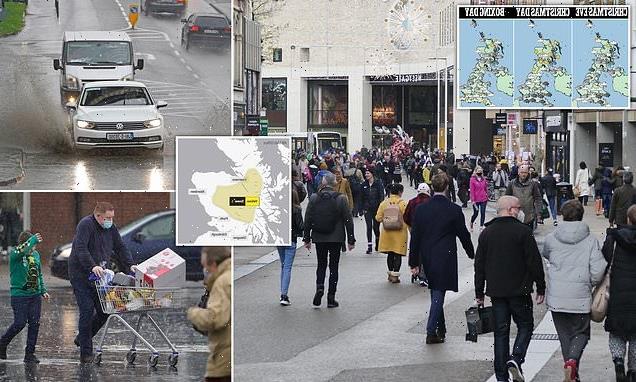 It WILL be a White Christmas! Snow set to fall across Wales and the north while Britons are warned to brace for ice as temperatures plunge to -2C

Britons have been told to brace for a White Christmas tomorrow, with snow expected to fall in large parts of Wales and the North of England and temperatures plunging below zero before southern and central Scotland are blasted by an Arctic ‘snowbomb’ on Boxing Day.

Snowdonia and the Pennines are due to get a flurry on December 25 as a band of rain coming in from the South West moves north and meets colder air.

Temperatures are set to plummet to -2C in parts of the north and east of England between Christmas Day and December 28.  Motorists driving to see family and friends in southern England and Wales have been warned to take care on the roads.

Agostinho Sousa, a consultant in Public Health Medicine at UKHSA, said: ‘It’s important to check on those who are more vulnerable to cold weather, including older neighbours or relatives – especially those living alone or those who have serious illness.

‘Remind them to heat their home to at least 18C, 64.4F. It’s also helpful to check they have enough food and drinks and any medicines they need.’

It comes as millions today faced travel chaos on the first Christmas getaway since 2019, as airports struggled to process passengers, trains were cancelled amid rail strikes and signal failures and traffic experts predicted the busiest roads in years. 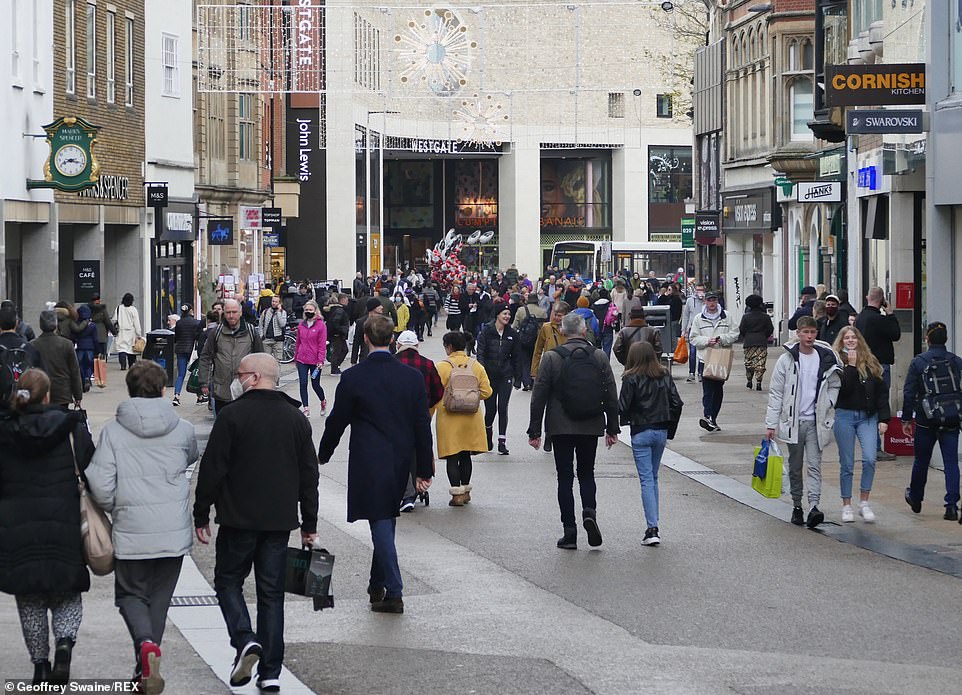 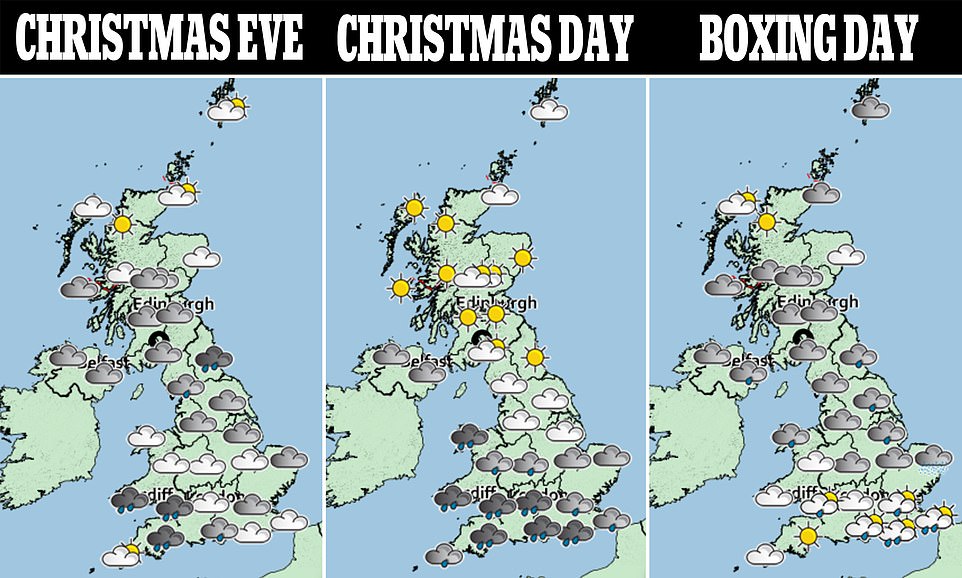 The Met Office has issued a yellow warning for snow across large swathes of the UK on December 26.

Rain moving north is expected to turn to snow over higher parts of the Lowlands, with winds likely to reach 45mph in some places. Roads and train lines are likely to be impacted by snow or ice tomorrow and Sunday, while some households can even expect a temporary loss of power.

And in England, large parts of Yorkshire and Humber, and Cumbria, could be impacted by icy conditions on Boxing Day.

A Met Office spokesman said: ‘As an area of rain moves northwards, it looks like turning to snow over the higher parts of Northern England, and then southern and central Scotland.

‘Coupled with strong winds, gusting to 35 to 45mph in places, this is likely to lead to some difficult travel conditions across higher Pennine and Cumbrian routes, as well as the Southern Uplands, during the early hours of Sunday.

‘Temporary blizzard-like conditions may be encountered above around 300 or 400 metres elevation. These conditions will probably move into some hillier central parts of Scotland during Sunday morning, while snow turns back to rain further south. The extent of snowfall is uncertain at this stage.’

Forecaster Brian Gaze, of The Weather Outlook, said there could even be flurries at lower levels.

‘Through Boxing Day outbreaks of rain and snow push northwards across the northern half of the UK. Most of the snow will be over high ground, but some accumulations are likely at lower levels for a time, particularly in Scotland,’ he said.

‘Temperatures vary from well below average in the north to above in the south. Unsettled weather is expected to continue through the following days with all regions having rain at times, although it may turn drier in the south later.

‘To begin with it will probably be cold enough for sleet or snow over northern hills. Temperatures then rise and across England and Wales it could be notably mild for the time of the year.’

The Met Office’s early Christmas forecast predicted unsettled weather but it was uncertain whether the airflow would be easterly – and chilly, bringing possible widespread snowfall – or from the Atlantic, so milder.

An area of low pressure from the Atlantic is now predicted to move in but it will run up against easterly winds over Britain, making it feel cool and bringing the chance of wintry conditions on high ground.

Deputy chief meteorologist Chris Bulmer, said: ‘The Christmas period will be a fairly unsettled spell across the UK this year.

‘Many will see wet and cloudy conditions as mild air dominates over the south and west of the UK. Where this mild air meets colder air trying to sink south there is a chance of some Christmas snow, this looking most likely over the Pennines, however exactly where this boundary will be is still uncertain.

‘In the far, north cold conditions and clearer skies will bring a more wintry feel. For many areas, a brisk easterly wind will bring a notable wind chill.’

It comes as the first Christmas getaway for two years today led to high demand for leisure journeys by road, rail and air.  Furious festive flyers were facing huge queues to get into Britain as airlines descend into chaos amid a surge of passengers trying to reach loved ones. 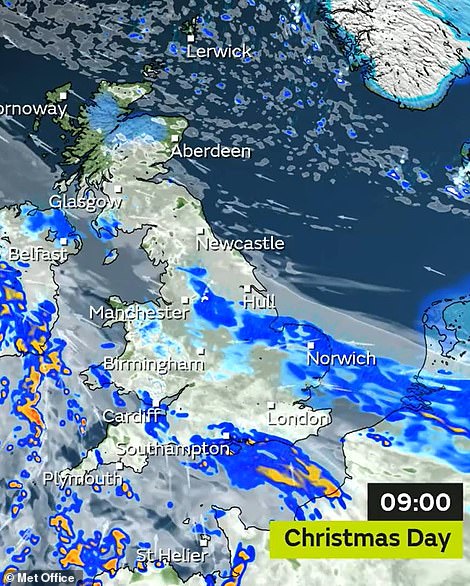 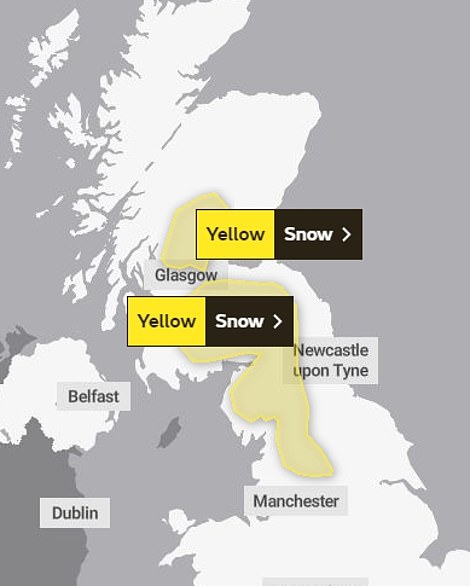 Snowdonia and the Pennines are due to get a flurry on December 25 as a band of rain coming in from the South West moves north and meets colder air. Temperatures are set to plunge to -2C in parts of the north and east of England between Christmas Day and December 28 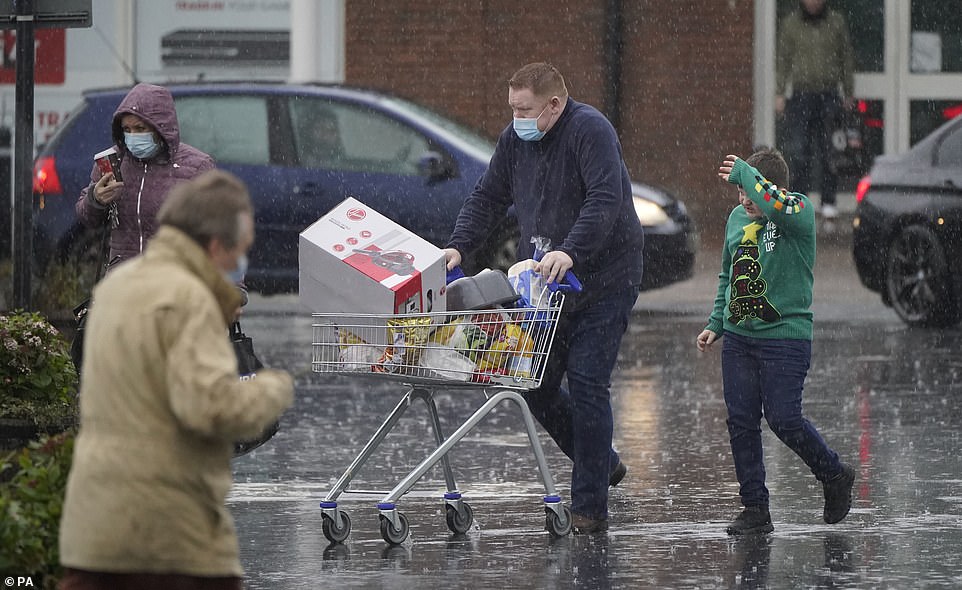 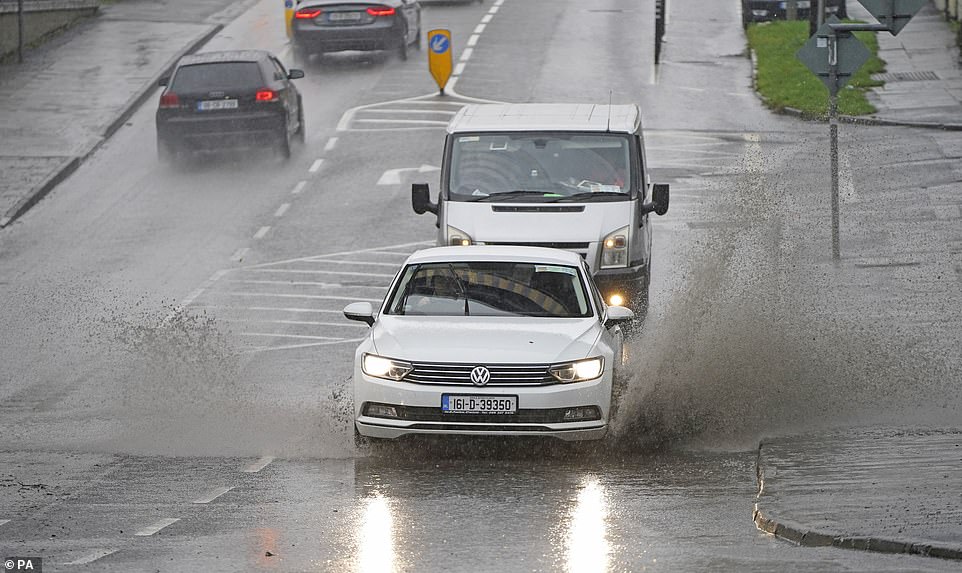 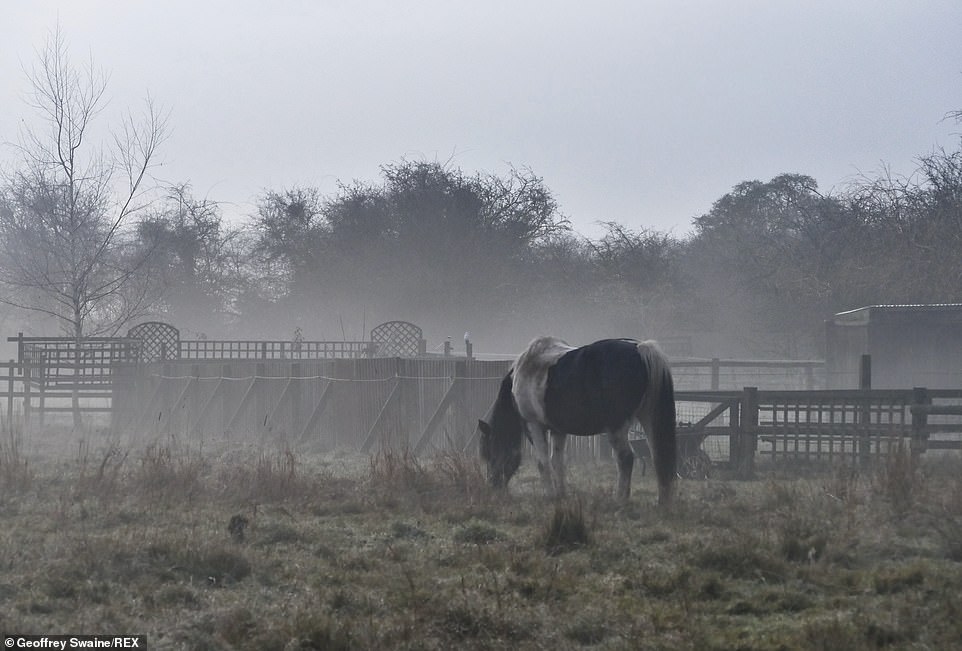 A horse grazes in a small holding on a misty Christmas Eve morning in Dunsden, Oxfordshire 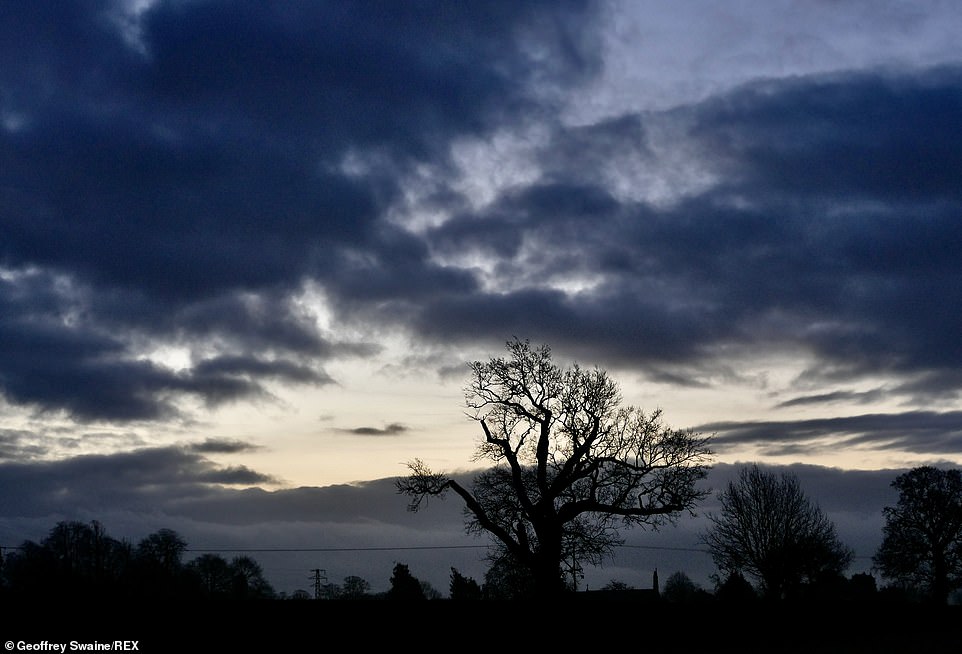 Britons have been told to brace for an Arctic ‘snowbomb’ on Boxing Day. Pictured, skies in Dunsden, Oxfordshire on Friday

Travellers ranted they had been waiting for more than three hours to get through passport control with few Border Force staff on hand to help.

Shocking pictures showed hundreds of customers packed into lanes with their luggage as they waited to be processed by officials.

Hundreds of trains continued to be cancelled across the UK as operators were hit by Covid-related staff absences. Almost one in 20 trains were shelved on Monday, and eight operators this week warned of the likelihood of last-minute cancellations.

CrossCountry, which runs trains between major cities such as Birmingham, Bristol, Newcastle and Leeds, said there would be no services on many routes today.

It urged people to avoid travelling today and on New Year’s Eve due to industrial action by the National Union of Rail, Maritime and Transport Workers.

UK roads are also said to be seeing their busiest festive period for five years as people travel to be reunited with their families.

An estimated 5.3million journeys by people embarking on overnight stays or day trips will take place on Christmas Eve with major roads set to be busiest between 11am and 2pm, according to RAC analysis.

A survey of nearly 2,000 people in Britain for watchdog Transport Focus indicated that 44 per cent plan to travel to spend the festive period with their loved ones.

The festive rush got off to a horrendous start on Christmas Eve, with passengers flying into and out of major UK hubs such as Heathrow, Gatwick and Manchester all reporting travel chaos.

Heathrow, the country’s busiest airport, was blasted by rucks of customers on social media for handling the influx of flyers poorly.

A pair of naked skiers were caught on camera up a 4,000ft mountain on a -2C winter morning.

George Robertson, 64, was rambling a remote mountaintop on Cairn Gorm, a peak in the Grampian Mountains in the Highlands of Scotland, hoping to snap wild hares when he captured more than he’d bargained for.

The retired father-of-three spotted a nude man and woman through his camera lens on Saturday as they clutched skis atop the snow-capped peak.

Mr Robertson verified his find through a pair of bird watching binoculars.

He said it was unusually warm that day, melting the snow and attracting lots of walkers.

Mr Robertson was with four other nature photographers and believes they were clearly visible to the nudist pair, but he claims the couple seemed unperturbed about being observed. 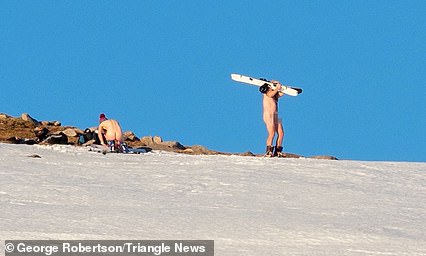 George Robertson, 64, was rambling a remote mountaintop on Cairn Gorm, a peak in the Grampian Mountains in the Highlands of Scotland, hoping to snap wild hares when he captured more than he’d bargained for 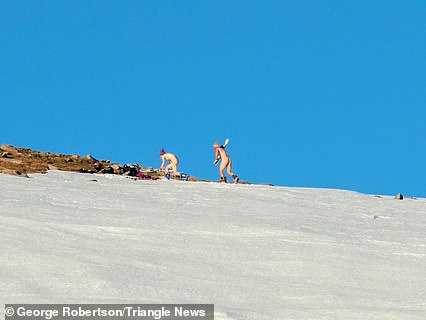 ‘There was a group of five of us out taking wildlife photographs and we stumbled across these two naked skiers about 100 meters from the summit,’ he said.

‘It was quite a busy day because the weather was warm. I have walked in the Scottish mountains for close to 50 years and I haven’t come across that before.

‘It was just disbelief at first because I was looking through the camera, scouring the horizon and there was a couple standing there with no clothes on. So it was just shock and disbelief, and then we carried on looking for wildlife.

‘They could obviously see other people were on the mountain because we were clearly in their line of sight but they just carried on doing what they were doing, and then dressed and skied off.

‘I wasn’t offended by it but I just thought it was a bit odd looking like that hundreds of metres up a mountain with snow on the ground. I thought the images were quite amusing at the time: just people running about in the snow with just bobble hats on and a pair of skis in their hands.’

It is not an offence to be naked in public in England and Wales but it does become a crime if a complainant can prove the nudist’s intention was to offend and shock.

In Scotland, it is just a common law offence and the test is whether a member of the public has been alarmed or disturbed by the public nakedness.