‘Italian variant’ of Covid-19 similar to UK strain was already spreading in August and could be a ‘precursor’ to the English one, top virologist says as British mutant reaches India

A strain of the coronavirus very similar to the UK mutation was already circulating in Italy as early as August, a top virologist has said.

The ‘Italian variant’ was spreading weeks before the first known cases of the UK strain and could even have been a ‘precursor’ to the mutation in England, according to Arnaldo Caruso, the president of the Italian Society of Virology.

Scientists found the strain by analysing swab samples from a patient who had suffered an unusually persistent Covid-19 infection, Caruso told Adnkronos.

‘To our surprise we realised that we had identified a new variant, similar but not identical to the English variant that was also starting to circulate in Italy,’ he said.

The similarity ‘between the variant we have identified and the English one leads us to think that the former may have actually generated the others that are emerging today in our continent,’ he added.

India today became the latest country to announce the arrival of the UK strain, after six people who had recently returned from Britain tested positive, while Germany revealed that the new variant had already arrived by late November. 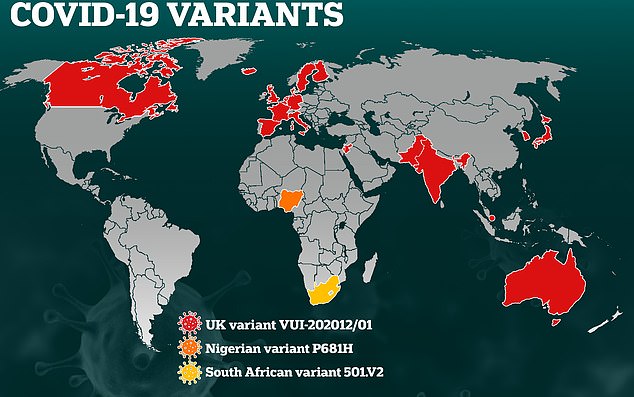 The UK coronavirus variant (in red) – feared to be more infectious than previous types – has already reached several European countries as well as long-haul destinations such as Canada, India and Australia, while Nigeria and South Africa have also reported new strains

The UK variant is feared to be more infectious and spread more easily among children, and is blamed for surging cases in London and the South East.

Fears over the new strain led Boris Johnson to cancel Christmas for millions and prompted dozens of countries to impose temporary travel bans on Britain.

But its exact origins remain unclear – with the variant believed to have ’emerged in September and then circulated at very low levels in the population until mid-November’, according to the UK government.

The first specimen was taken on September 20, weeks after the similar mutation was apparently already spreading in Italy.

Studies by another Italian epidemiologist suggested that the variant found in Brescia ‘could have been generated around early July,’ Caruso said.

At least one of the mutations in the distinctive ‘spike’ proteins which the virus uses to attack the body is thought to be the first of its kind in Europe.

Caruso did not say whether the Italian variant was thought to be more transmissible, but suggested it could have been a forerunner of the UK’s more infectious strain.

It echoes the finding that one of the most significant mutations in the UK variant is a change which was first observed in Brazil more than eight months ago.

As with the UK variant, there is no evidence that the Italian strain will make existing vaccines any less effective in protecting people from Covid-19.

‘I remain optimistic at the moment,’ Caruso said of the new strain. 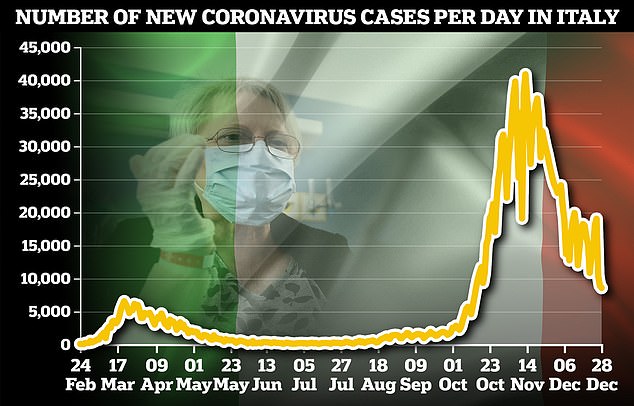 Italy has seen a similar trend in cases to the UK, with a massive resurgence in the autumn which reached its peak in November, leading to tens of thousands more deaths 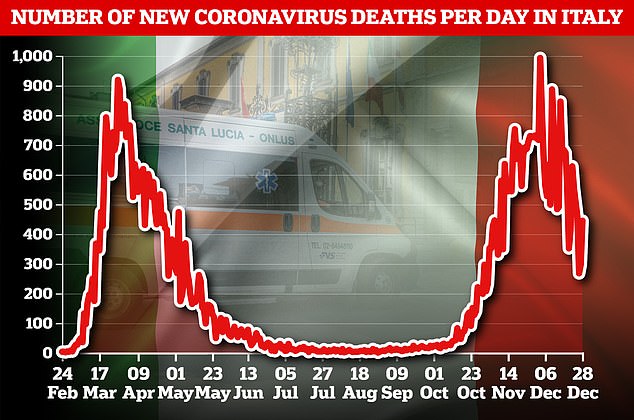 Italy is among the countries to have stopped travel from the UK and detected at least one case of the British strain in the last two weeks.

The patient and his partner had recently returned from the UK on a flight that landed at Rome’s Fiumicino airport, and were put in isolation.

The new variant can be detected with PCR tests adapted to pick up mutations in the virus, which health experts say are unsurprising.

The finding in Italy comes as health authorities in Germany revealed they had found a case of the new variant as far back as November.

Samples taken from a man and woman in late November were sequenced by medical experts in Hannover and found to contain the mutated UK variant.

The elderly man, who has since died, is feared to have contracted the virus from a daughter who had visited England in mid-November.

Like the UK government, health officials in Germany said there was no sign that the new strain is more deadly, but it is thought to be up to 70 per cent more infectious.

Another similar strain has been found in South Africa and is also feared to spread more easily among young people, leading to a further series of travel bans.

Despite the travel restrictions, the UK variant has already appeared in a number of other countries including Canada and India. 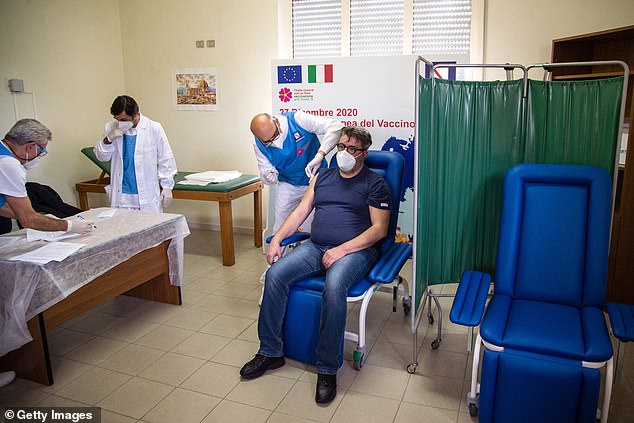 A patient is vaccinated in Naples on Sunday as Italy begins its immunisation programme following the deadliest outbreak in Europe with 72,370 deaths since February

The WHO has called on countries to step up their genomic sequencing efforts to ensure that any further mutations are detected in 2021.

‘There will be setbacks and new challenges in the year ahead – for example new variants of Covid-19,’ said WHO chief Tedros Adhanom Ghebreyesus.

Tedros said that ‘only if countries are looking and testing effectively will you be able to pick up variants and adjust strategies to cope’.

He said that the WHO is working closely with scientists across the world to ‘better understand any and all changes to the virus’ and their impact.

The UK is regarded as having a strong genome sequencing programme, hailed by Boris Johnson as ‘the best in the world’.

The fact that variants may have been in Europe earlier than previously thought echoes the findings in several countries that the coronavirus was already spreading outside China in late 2019.

Italy has found evidence that the virus was spreading there as early as September last year, while other studies suggest it reached France, Brazil and the US in 2019.

It was not until December 31 that the WHO’s China office was informed of a mystery pneumonia which had sickened 44 people in Wuhan.

Two months later, Italy became the centre of Europe’s first major outbreak as the virus ran amok in the wealthy north, especially the region of Lombardy.

As of Monday evening, more than 2.05million people had been infected in Italy, with 72,370 deaths confirmed.