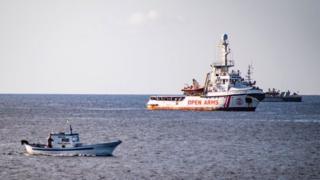 Italy’s Senate has voted to allow the prosecution of ex-interior minister Matteo Salvini for blocking a migrant ship off Italy’s coast last August.

More than 100 migrants were stuck on the Spanish rescue ship Open Arms for 19 days off the isle of Lampedusa.

Prosecutors in Sicily accuse Mr Salvini of illegal detention, which could bring a jail term of up to 15 years.

The anti-immigration, right-wing politician is already set to stand trial in a similar case.

The Senate voted 149 to 141 to strip him of his parliamentary immunity in the latest case, paving the way for prosecution.

Mr Salvini, 47, insists that preventing irregular migrants from disembarking in Italy was government policy at the time.

“Defending Italy is not a crime. I am proud of it, I would do it again, and I will do it again,” he said on Wednesday.

His blockade of the ship caused an outcry and a serious split in the coalition government at the time. His League party was in a coalition with the anti-establishment Five Star, but now he is an opposition MP.

Opinion polls suggest the League’s popularity has slumped during the coronavirus crisis, though a Demopolis poll this week showed it still the top party, on 25.4%, followed by the centre-left Democratic Party (PD) on 21%.

Coronavirus restrictions have prevented Mr Salvini holding rallies up and down the country or posing for selfies on the beach – campaign tactics which have endeared him to many Italians. His popularity is driven by prolific use of social media, in which he condemns the influx of migrants from North Africa.

In February, the Senate voted to strip him of his parliamentary immunity in a similar case, involving the Italian coastguard boat, Gregoretti.

The opening court hearing in that case has been postponed until 3 October because of coronavirus restrictions.

All the parties in his governing coalition voted on Thursday to lift Mr Salvini’s immunity.

Mr Salvini tweeted defiantly on Thursday: “By sending me for trial they’re giving me a big gift, but unlike the others I’m going there with my head held high and my back straight”.

Last summer Open Arms filed a legal complaint against Mr Salvini’s block on their ship and finally on 20 August the authorities allowed it to dock in Lampedusa, a tiny island off Tunisia that has struggled for years to cope with boatloads of migrants.

By that time, many of the migrants had already been allowed off the ship.