Kabul: In Kabul’s main children’s hospital, 2½-year-old Guldana is sitting up in her bed, but she’s too exhausted to even open her eyes. Her tiny body is wrapped in a blanket, only her emaciated face showing.

She’s one of a growing number of near-starving children who are brought every day to the Indira Gandhi Children’s Hospital in the capital. Hunger is increasing dramatically in Afghanistan, fuelled by an economic crisis that has only gotten worse since the Taliban seized power nearly three months ago. 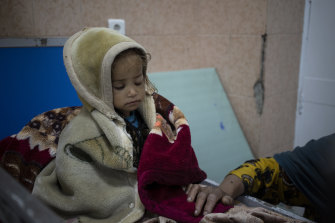 Guldana, 2 and malnourished, sits on a bed in the Indira Gandhi hospital in Kabul, Afghanistan, on Monday.Credit:AP

Guldana’s father, Jinnat Gul, says he can hardly afford to feed her and his other five children. He used to work going house to house collecting scrap goods and selling them. But for the past three months, work dried up and he has hardly made any money.

“Before, I had enough work, I could provide food. We could have meat one or two times a week,” he said. Now his family mainly gets by on boiled potatoes. He says sometimes he only has bread soaked in green tea for his children, “just to give them something so they stop crying.”

The UN’s World Food Program said on Monday that the number of people on the edge of famine has risen to 45 million in 43 countries. The number is up from 42 million earlier this year.

Afghanistan is the source of most of that increase. The number of Afghans living in near-famine conditions has risen to 8.7 million, up by 3 million from earlier this year, the WFP said. Overall, almost 24 million people in Afghanistan, or 60 per cent of the population, suffer from acute hunger. An estimated 3.2 million children aged under 5 are expected to suffer from acute malnutrition by the end of the year.

“It’s a crisis. It’s a catastrophe,” WFP Executive Director David Beasley said during a weekend visit to Afghanistan. The WFP is rushing in supplies to feed people as the harsh winter sets in, but it says it needs some $US220 million ($297 million) a month in 2022 to fund its effort.

A severe drought this year is one cause for increasing malnutrition. But also, more and more people simply don’t have money to buy food.

The country’s economy had been rapidly declining under the previous US-backed government, which struggled to pay salaries to its employees.

Now the economy is in full-fledged meltdown after the Taliban seized power on August 15. The Taliban government is mired in financial crisis, scrambling for cash. The US and other Western countries have cut off direct financial assistance to the government that covered most of its budget; also, the Taliban government cannot access billions of dollars in national reserves held abroad. As a result, millions of Afghans have not received salaries for months. 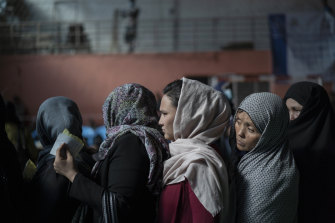 Women wait to receive cash at a money distribution organised by the World Food Program (WFP) in Kabul last week.Credit:AP

Worsening the situation, hundreds of local health facilities around the country have had to scale back services or shut down completely because of the lack of international funding. That means families with children suffering from malnutrition have to go further to get care — or get none at all.

The Indira Gandhi Children’s Hospital had to expand its space dedicated to malnutrition cases from one room to three, said one doctor, Salahuddin Salah. At least 25 children brought to the hospital over the past two months have died, he said. Most workers at the hospital, from doctors and nurses to cleaning staff, have not received their salaries in three months.

On Monday, when The Associated Press visited the hospital, there were 18 children in the malnutrition ward. It receives around 30 new cases a week, said Zia Mohammed, assistant director for nursing. “Since two and three months, our malnourished patients have increased day by day,” he said.

In one bed, a four-month-old boy named Mohammed was extremely emaciated, the flesh was shrivelled on his tiny limbs. His skin was so thin, the veins showed through on his forehead like a map of tiny blue lines. 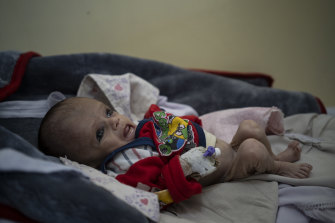 Mohammed, 4, lies on a bed in the Indira Gandhi hospital in Kabul, Afghanistan on Monday.Credit:AP

Mohammed was born a month prematurely, and his mother died from complications during the birth. “She bled to death because we had no money to take her to the hospital,” said Rahila, the second wife of Mohammed’s father, who brought the baby to the hospital.

The father was in the military of the ousted government and so hasn’t had an income since the Taliban takeover, Rahila said. They tried giving Mohammed milk bought from the market, but he got diarrhoea from it, so they have mainly fed him tea-soaked bread, she said.

Jinnat Gul, Guldana’s father, said he brought his daughter to Kabul a week ago from his home village, Shahr-e Now, in Baghlan Province, north of Kabul, after a hospital in the provincial capital said it didn’t have supplies to treat her.

He said Guldana is not the only child suffering back home. “There’s a lot of sick children in the village,” he said, “but there’s no doctor to say if it’s malnutrition or not.”