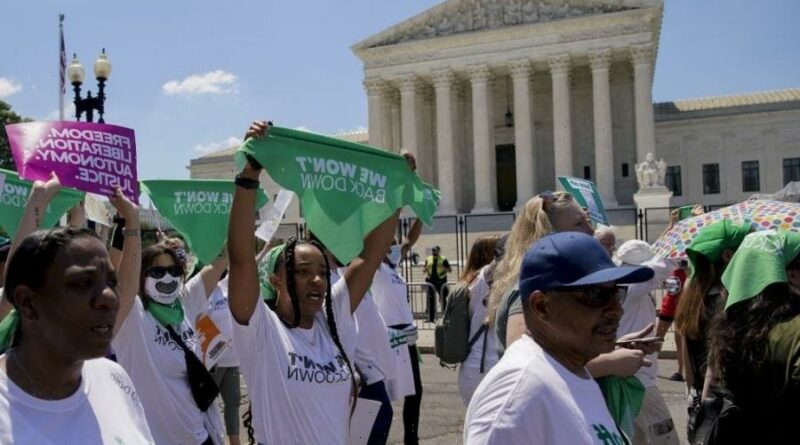 When the Supreme Court overturned Roe v. Wade on June 24, it dealt a devastating blow to women across the United States. After only 50 years of constitutional protection and full control over what happens with our bodies, in the blink of an eye, for millions of Americans, it was gone.

The decision, Dobbs v. Jackson Women’s Health Organization, will undoubtedly negatively impact all people with uteruses, but it will have a disproportionate effect on Black women. We must also keep in mind that pregnant Black women have long been criminalized, even during the era of Roe v. Wade protection. It’s impossible, and quite frankly, irresponsible, to have conversations on the stripping of reproductive rights and not discuss what that would continue to mean for Black women — who, for most of US history, have not had body autonomy. This fact made theSupreme Court’s ruling especially cruel.

“I have rape-colored skin,” poet and author, Caroline Randall Williams, wrote in the New York Times. “I am a Black, Southern woman, and of my immediate white male ancestors, all of them were rapists. My very existence is a relic of slavery and Jim Crow.” Like Williams, and many descendants of enslaved Black people, my complexion is also a direct reflection of what was done to the bodies of the Black women who birthed us. As talks for long overdue reparations have become mainstream, it’s crucial that conversations on what was done to Black women for centuries be part of that dialogue.

We can’t discuss reproductive rights without mentioning the “father of gynecology,” J. Marion Sims. Sims experimented on the reproductive body parts of enslaved Black women — without their consent and without anesthesia. Up until recently, Sims was celebrated for his work that came at the expense of these painful and horrific procedures. This is a reminder of the lack of care and consideration that has been taken with regards to Black women’s bodies — then and now.

The US’s maternal death rates have almost doubled over the last 30 years. Additionally, according to the CDC, Black women are over three times more likely to die from a pregnancy-related complication than white women are. During the pandemic, US maternal mortality increased 33%, hitting Black and Hispanic women especially hard. Due to the systemic racism that pervades every part of the day-to-day lives of Black people: Black women have less access to contraceptives, are uninsured at higher rates than white women, are disproportionately impacted by reproductive health challenges, and rely on Medicaid for reproductive healthcare at higher rates than white women — more than 40 percent of US births are covered by Medicaid, and for Black mothers, it covers more than 65 percent of births. Keep in mind that 12 states have refused to expand Medicaid to cover people who earn below the poverty line. This includes almost all of the southeast, including the state with the second-highest maternal mortality rate, my home state, Georgia — with 60% of those deaths being Black and Hispanic women. And 60% of those deaths were preventable.

These alarming facts, paired with the realities of the lasting impacts of systemic racism (from redlining to mass incarceration) have put Black women in positions that make the decision to have children especially delicate. It’s no surprise that Black women are almost four times more likely to have an abortion than white women. Giving birth can be deadly for Black women, and removing the option to choose will likely lead to more death.

In the aftermath of Dobbs, as writer and lawyer Imani Gandy has stated,:

[t]he media is replete with reports of doctors waiting until pregnant people are on the brink of death before treating them. Hospital administrators and lawyers are making decisions about the medical care doctors can provide their patients. People are being denied prescription drugs they’ve taken for years because of concerns the drug is an “abortifacient.”

This SCOTUS ruling is unjust for all women, but especially inhumane for Black women. For centuries, we’ve been dismissed and disregarded as not deserving of full control over our bodies and lives. Will there ever be a generation of Black women that aren’t subject to consequences for choices made for them, and without their consent? We can’t go back in history to right the wrongs of those who brutalized the Black women that came before us, but our country — local leaders, at the very least — can do right by us now. They can give us the respect that was never given to our ancestors. They can give us the choice that we deserve. Unless of course, these leaders truly don’t care about the lives of Black women. In that case, we’ve got to do what we’ve always done: help everyone else, by helping ourselves. Midterm elections are underway, and our reproductive rights are on the ballot. So are our lives.