Home » World News » ‘It’s not a well-kept secret any more’: Is Great Barrier set to become the new Waiheke? 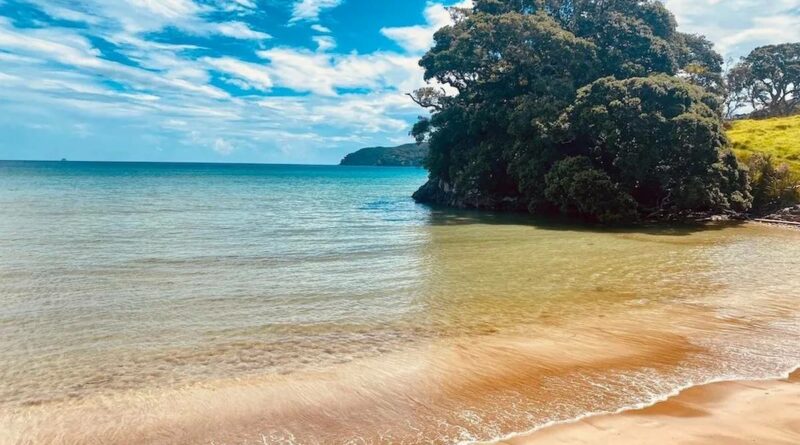 Originally published by The Spinoff

Great Barrier Island has become a holiday hotspot. Is it changing for the better?

On a sweltering Saturday in Auckland, Jed finally finds a few moments to cool down. It’s after midday and the Great Barrier Air pilot has flown 12 masked holidaymakers from Auckland Airport to Aotea, a brutally humid 30-minute trip. It’s his fourth flight of the day and Jed’s got another two — at least — before clocking off. He doesn’t show it, but the pits in his perfectly ironed pilot’s uniform are surely getting steamy.

Standing in the shadow cast by his small plane, his aviator sunglasses glinting in the sun, Jed answers quick-fire questions. No, he hasn’t stayed on Great Barrier, and never gets time to see its legendary vistas. He’s too busy ferrying visitors to and from the place. Jed gets to see the island only from above, or on this stretch of tarmac, in 30-minute bursts, the time it takes to unload, then reload, his plane.

Before he excuses himself, because he really does have to fly, Jed admits he carried important cargo recently. That would be Lorde, the pop star he flew to the mainland after a recent solar-powered holiday. He’s proud of his celebrity passenger, and believes she’s a regular visitor. “She might have been back since then,” he says, turning to begin prepping his plane.

Inside the airport, there’s more gossip. “One of our cars got stolen the other day,” says Sue from Aotea Car Rentals, as she copies driver licences and scans credit cards. When your community’s population tops out at an estimated 1200, car theft quickly becomes big news. It wouldn’t be hard to do: keys are left in ashtrays, and cars are rarely locked.

Yet it takes gumption to do something so brazen on the island where everyone knows your name. Sue’s unimpressed by police efforts to crack the case. “They didn’t find it,” she says. (Aotea has one police station, staffed 8am-4pm, Monday-Friday). Instead, she sought her family’s help to track it down. It worked: by the next day, her daughter had returned the missing vehicle.

Hot gossip, hot property. Jed’s flights, Sue’s rentals and the island’s scant accommodation options are going off. With borders closed to stop the spread of Covid-19, Great Barrier Island has become the holiday destination of choice for in-the-know Aucklanders and beyond. Attracted by its isolation and dislocation, with minimal cellular service and dodgy Wi-Fi, sun-seekers have anointed Aotea the latest hotspot, a place to go to escape busy city life when the Pacific Islands feel too far.

All that attention means Aotea is busier than ever. You can’t use Instagram or Facebook without someone you know showing off parts of its 285km of primo beaches, pristine coastlines and panoramic sunsets. The ancestral lands of Ngāti Rehua were initially exploited by Europeans for copper, gold, minerals and kauri. But its latest business boom is tourism. “More akin to the breezy Cook Islands than the City of Sails,” said a recent Stuff review; “A stunning … magical place,” raved an NZ Herald visitor.

Descriptions like that are what attracted our wider family to visit. On a recent five-night stay, it was quickly obvious why demand is so high for what Great Barrier Island offers. It’s rough and rustic, yet majestic, with large parts left untouched. You can visit a new beach every day, with fish slipping through the pristine blue water as you swim. At night, because of dark sky sanctuary rules, the horizon lights up with more stars than you could possibly count. One night, while stargazing, we heard the calls of kiwi echoing through the bush beside us.

Locals are characters, only ever go by their first names, wave a hand when they drive past, and are always up for a chat. While ordering takeaways at Mulberry Grove Cafe on our first night, a customer named Chad called Steve behind the till to tell chef Phil that they were “the best fish and chips he’d ever had”. Phil nodded, then got back to deep-frying huge fillets of hoki.

We grabbed drinks from the fridge, opened our own beers behind the bar, and headed outside. By the end of our meal, eaten at a huge wooden table, Phil and Steve felt like old friends. Our kids helped clear up, and we got drinks to go.

Not everyone is so enamoured by all these outsiders. Some want Aotea kept as an untouched piece of paradise, used and loved by only a select few. More visitors means more Instagram photos, more holidaymakers and increased demand for amenities. With just a few general stores, cafes and a tiny bakery, it’s not hard to imagine Great Barrier Island soon becoming a smaller Waiheke Island, with craft breweries, wineries and restaurants on offer. A solar-powered Countdown supermarket within five years? It feels entirely plausible.

Across our time there, I heard many concerns about this kind of growth. Sue, from her car rental desk, cautioned against it, saying bigger businesses would struggle because of the island’s lack of reticulated power. Others say diehard locals would put up a fight. While signing in for our car, I heard someone complain about “those bloody Stuff reporters” – travel writers who keep talking Aotea up. After that, I pledged not to tell anyone that I’m one of those “bloody” reporters too.

It happened again, on the only day of rain, while walking our kids 40 minutes into the bush in search of Kaitoke’s hot pools. We found queues of people trying to enjoy the steaming puddles of thermal water. I asked one if she was new to the island too. “We’ve been coming here as long as I can remember,” she huffed. “It’s not a well-kept secret any more.” Another pledge: I stopped telling locals I was a first-timer after that.

Great Barrier Island’s growing status was on display in this recent NZ Herald story. Senior political correspondent Audrey Young met former National Party politician Nikki Kaye on Aotea a year on from her dramatic retirement, but they kept getting interrupted. Sharing a beer at the Irish bar Currach, they were startled first by David Cunliffe, the former leader of the Labour Party.

A few moments later, they realised they were sitting next to Lorde. It led to an awkward exchange in which the “mortified” pop star suddenly realised she was sitting next to a Herald reporter while enjoying an idyllic, supposedly anonymous, retreat.

Leigh, the owner of Sunset Waterfront Lodge in Tryphena, likes the headlines. His business relies on a continual influx of visitors, and news stories help raise awareness. The former West Auckland cop and his partner Lynley bought the rundown hotel – on the southern end of the island, about a 10-minute drive from Claris Airport, where Jed’s planes land – after a family member sent them the Trade Me listing as a joke.

Once lockdowns eased in 2020, they visited, fell in love, bought it, then spent a year cleaning it up, bringing painters over from Auckland and taking their van back and forth on the ferry to pick up new carpet, appliances and furnishings. They opened last August at the start of a five-month lockdown in Auckland, surely the worst possible time to start a tourism operation. Yet business is thriving. They’re booked out well into winter, with next summer already full, and slots being snapped up as far away as 2025.

Leigh, who went out of his way to accommodate our party of 12, shifting barbecues to our units and dragging kayaks down to the beach for the kids, loves his new life. The only thing he misses is his favourite butcher, so he puts a fridge in his van, catches the ferry back to Auckland, and stocks up on steaks every four months.

He already considers himself a local, despite his relatively short time on the island. With his mullet, singlet, scuffs and cheeky grin, he fits right in. One day, we found him chasing chickens to put them back in their pen. “We’re a bunch of weirdos,” he told me one night, while I turned sausages on the barbecue. “But we’re harmless.”

On our last full day on the island, I met another local. After our fourth beach swim of the day, a man called Mahon parked up in his van beside me. With his togs hanging far too low for any public occasion, he tossed a packet of diced beef – “my dinner” – into a small fridge, pulled out a four-pack of gin and tonics, offered them around, and began pontificating. In a conversation that began with the phrase, “It’s chaos out there,” he covered Covid-19 restrictions, Auckland’s lockdowns, conspiracy theories and Prime Minister Jacinda Ardern’s border policies. Basically, another normal 2022 chat.

When we got to the topic of Aotea, his voice lowered. Its growing appeal, he theorised, is because “we’re running out of places to explore”. Yes, he agrees it’s a great escape. But Mahon in a van had a stern warning for anyone wanting to become a permanent resident. You can get stuck there, he said. He’s the perfect example: he came for one week, instead stayed for five. His son bought his van over, and now he doesn’t know when he’ll return to his home in Auckland.

The idyllic lifestyle has its problems, chiefly the high price of food and petrol, and lack of amenities. “You’re cut off,” he said. “You’re paying island prices.” He’s right: Whittaker’s chocolate is $7.30 a block; petrol is $3.60 a litre. Is it worth it? Staring out at a beach shimmering in the sunlight, full of kids splashing happily in the gentle surf, some of whom were my own, Mahon hiked up his board shorts and wrapped up his thoughts with a self-help meme that answered that question: “We could all get used to settling for less.”

They’re wise words. On our last day, as we checked out and thanked Leigh for our stay, we tried to rebook for the following year. Once again, it feels like we might need the escape after another year blighted by Covid-19. But Leigh’s lips tightened as he turned to his computer. Coloured shapes blocked out months on a calendar. He broke the bad news: his four two-bedroom A-frame lodges, as well as several units, are booked out for all of January and February 2023. “We’ve even got bookings into 2025.”

Everyone else has had the same idea. Demand for Great Barrier Island, and the services of Jed, Sue, Steve, Phil, Leigh and Lynley, doesn’t seem to be slowing any time soon. As we left, Leigh apologised and told us a friend had called him the day before, begging to squeeze in for just a single night. No chance, he told them. “Mate, even if you wanted one night a year from now, I couldn’t do it.”