Sao Paulo: Brazilian president Jair Bolsonaro shrugged off a government report that deforestation reached an 11-year high on his watch, saying on Wednesday that he expects the destruction of the world's largest tropical rainforest to continue. 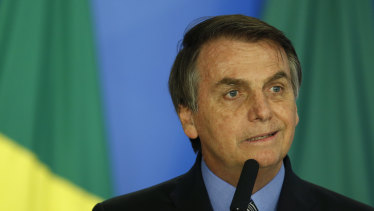 Not overly worried about the Amazon: Brazil’s President Jair Bolsonaro.Credit:AP

"Deforestation and fires will never end," the pro-development president told reporters in Brasillia. "It's cultural."

The comments were quickly condemned by environmentalists, who fear that the Amazon is approaching a tipping point at which large swathes of the rainforest will be irrevocably lost.

Bolsonaro campaigned for president last year on promises to open up the Amazon to more agriculture and mining; critics accuse him of weakening environmental protections and enforcement.

"About 90 per cent of the destruction of the forest occurs illegally," said Marcio Astrini, public policy coordinator at Greenpeace Brazil. "Therefore, the only cultural aspect of deforestation in the Amazon is the culture of forest crime, which the government does not seem to want to confront." 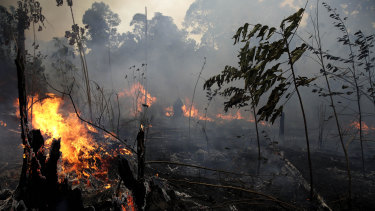 A fire burns trees and brush along the road to Jacunda National Forest in Brazil.Credit:AP

The Amazon lost 3769 square miles (6065 km) of rainforest between August 2018 and July 2019, Brazil's National Space Research Institute reported this week. That was up 30 per cent from the previous year.

Brazil's deforestation rate spiked in the 1990s, but it began to drop as the country's environmental protection agency, called IBAMA for its initials in Portuguese, cracked down on illegal logging and mining. The rate began climbing again in 2012; the increase has accelerated under Bolsonaro.

Bolsonaro took office in January, pledging to end IBAMA's "industry of fines." His policies drew international scrutiny over the summer as fires in the rainforest spiked. Most of the fires are set by ranchers clearing land for pasture.

Environmental Minister Ricardo Salles blamed the region's "illegal economy" for the spike. He called a meeting for next week to discuss ways to stem deforestation, including transferring teams that monitor the forest from Brasilia to the Amazon region.

2019 has been a year of environmental catastrophes for the country. In January, a tailings dam at an iron ore mine collapsed, burying hundreds of people under toxic waste.

In August, 25,000 fires spread throughout the Amazon, a nine-year high. Since September, a mysterious oil spill has sullied hundreds of miles of pristine beaches along the country's northeast coast. This month, fires ravaged wetlands, destroying 500 square kilometres of vegetation.

Still, IBAMA issued its lowest number of fines from January through September since 2000, and 22 per cent less than last year, according to the news site Poder 360.

Bolsonaro's approach to the environment has isolated him internationally. Germany and Norway froze millions of dollars in aid to the Amazon over his policies in August, and French President Emmanuel Macron threatened to pull out of a long-sought trade deal between Europe and South America.

In September, a group of 200 investment funds called on companies to reduce their reliance on deforestation, saying Brazil's policies were exposing businesses to compliance risk. Several companies have called for boycotts of Brazilian beef and leather.

Bolsonaro has accused the National Space Research Institute of manipulating its data and had its chief fired. He has dismissed concerns about the Amazon as overblown, and characterised international interest in the rainforest as an assault on Brazil's sovereignty.

Bolsonaro's government is now proposing a plan to legalise mining activity in indigenous territories and issue government permits to people who move onto and take over land, fulfilling one of his top campaign promises.

Tension in the region is increasing as emboldened miners and loggers venture further into indigenous territory. A well-known indigenous "Guardian of the Forest" in northeastern Brazil was shot dead this month by five armed men, allegedly loggers, in the forest he spent years protecting. The killing of Paulo Paulino Guajajara sent shock waves throughout the country.

"Our lands are being invaded, our leaders murdered, attacked and criminalised, and the Brazilian state is abandoning indigenous peoples to their fate with the ongoing dismantling of environmental and indigenous policies," the association of Brazilian indigenous People said after Guajajara's death. "The Bolsonaro government has indigenous blood on their hands."