Mick Ferris, 53, was killed in the freak accident when a window fell 27 floors from a luxury penthouse flat in central London yesterday. 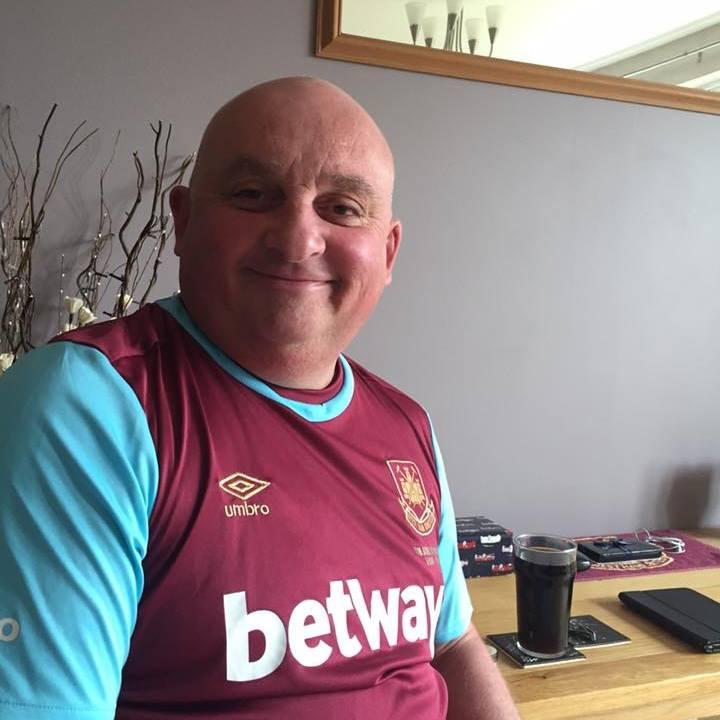 In a tweet, the TV host wrote: "I’m so saddened by the passing of Mick Ferris. He was a huge West Ham fan and has passed away in the most sudden of circumstances.

"My thoughts are with his family and everyone who knew him. None of us are promised tomorrow.

"Tell your loved ones you love them today x x x". 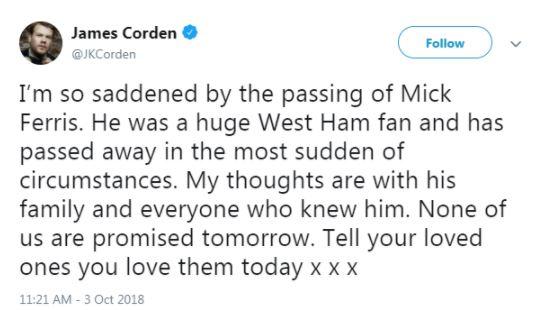 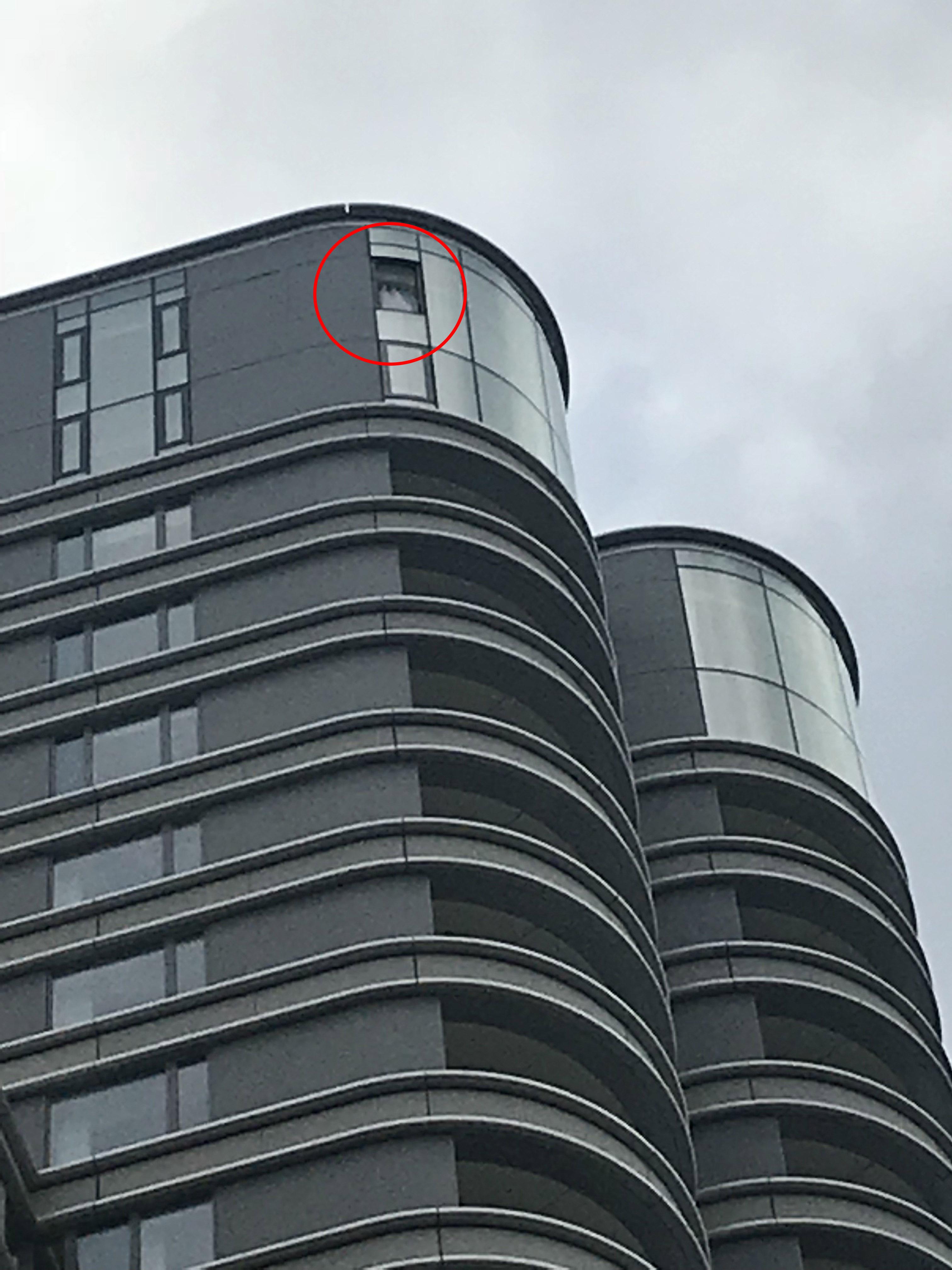 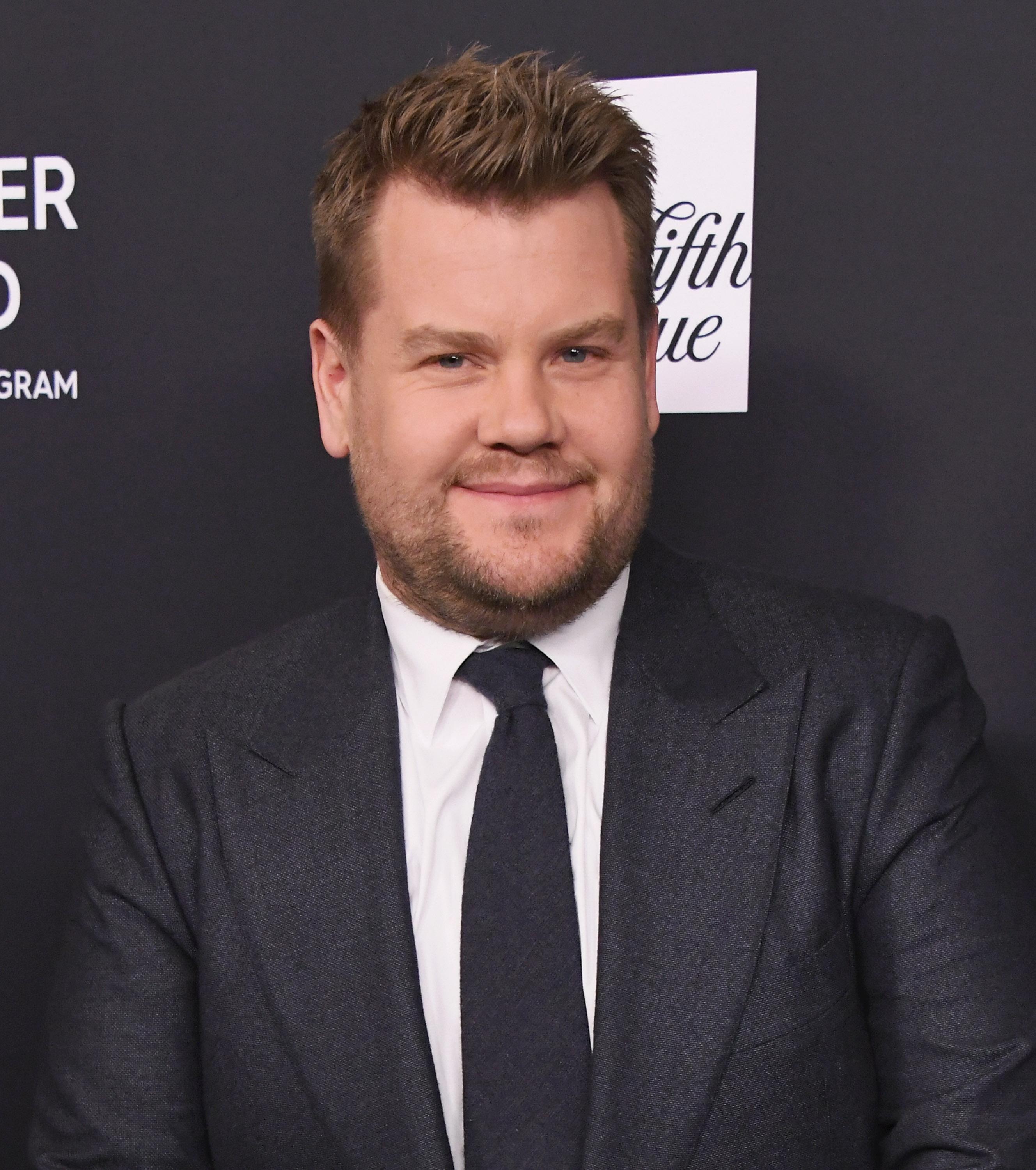 He had also shared a post from James Corden praising the team's 3-1 win against Manchester United over the weekend.

It comes as witnesses yesterday revealed their shock at seeing the tragedy unfold outside a block of multi-million pound apartments opposite the Tate Britain in central London at 10.42am.

Mick is thought to have been walking below The Corniche block of luxury apartments when the glass pane fell from the 27th floor, where flats cost up to £6million. 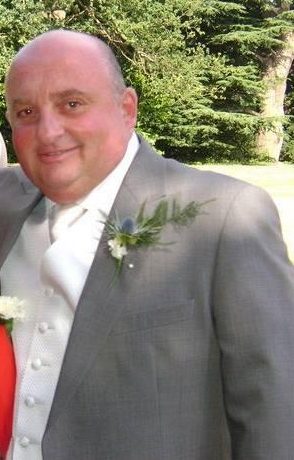 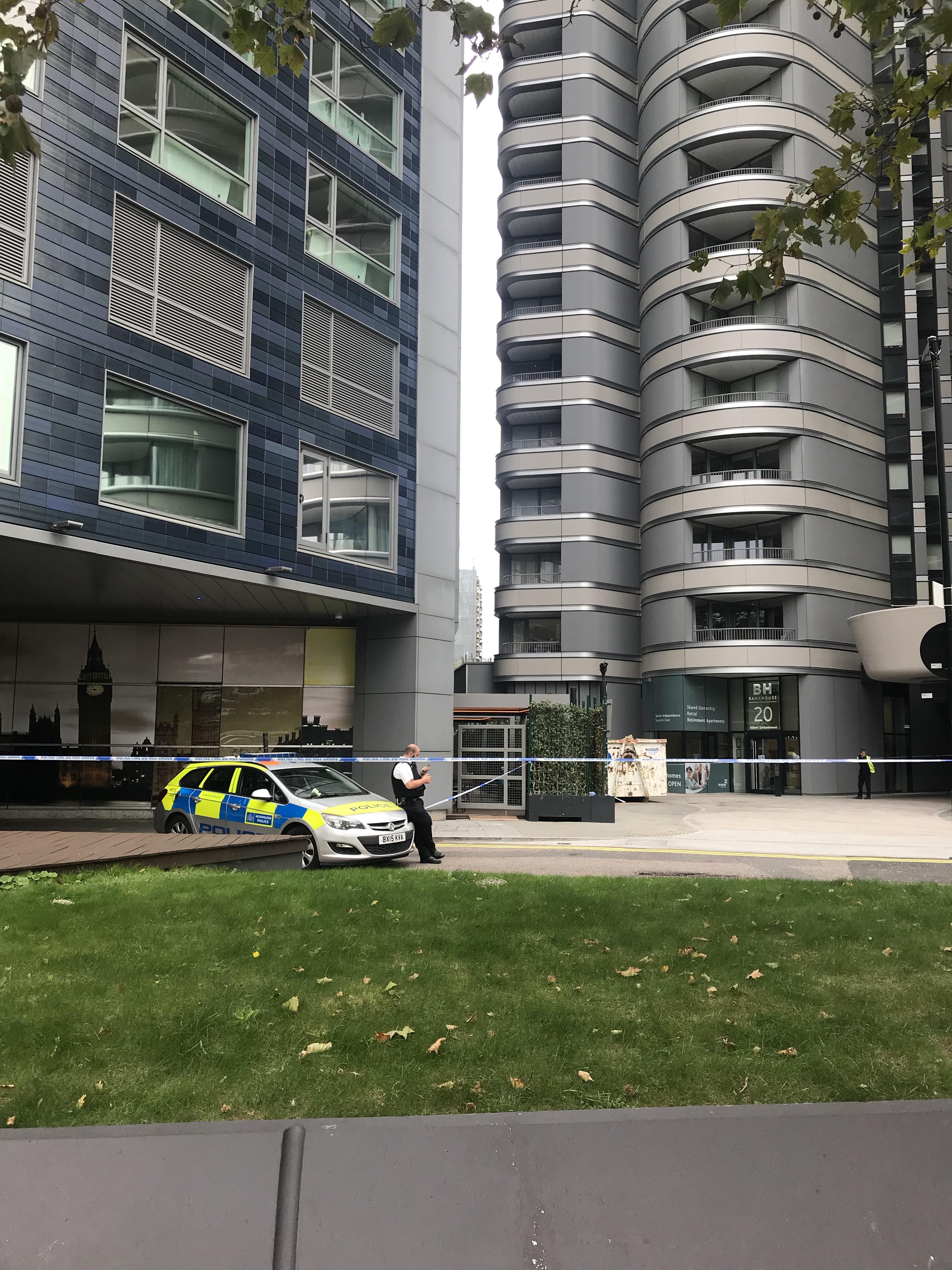 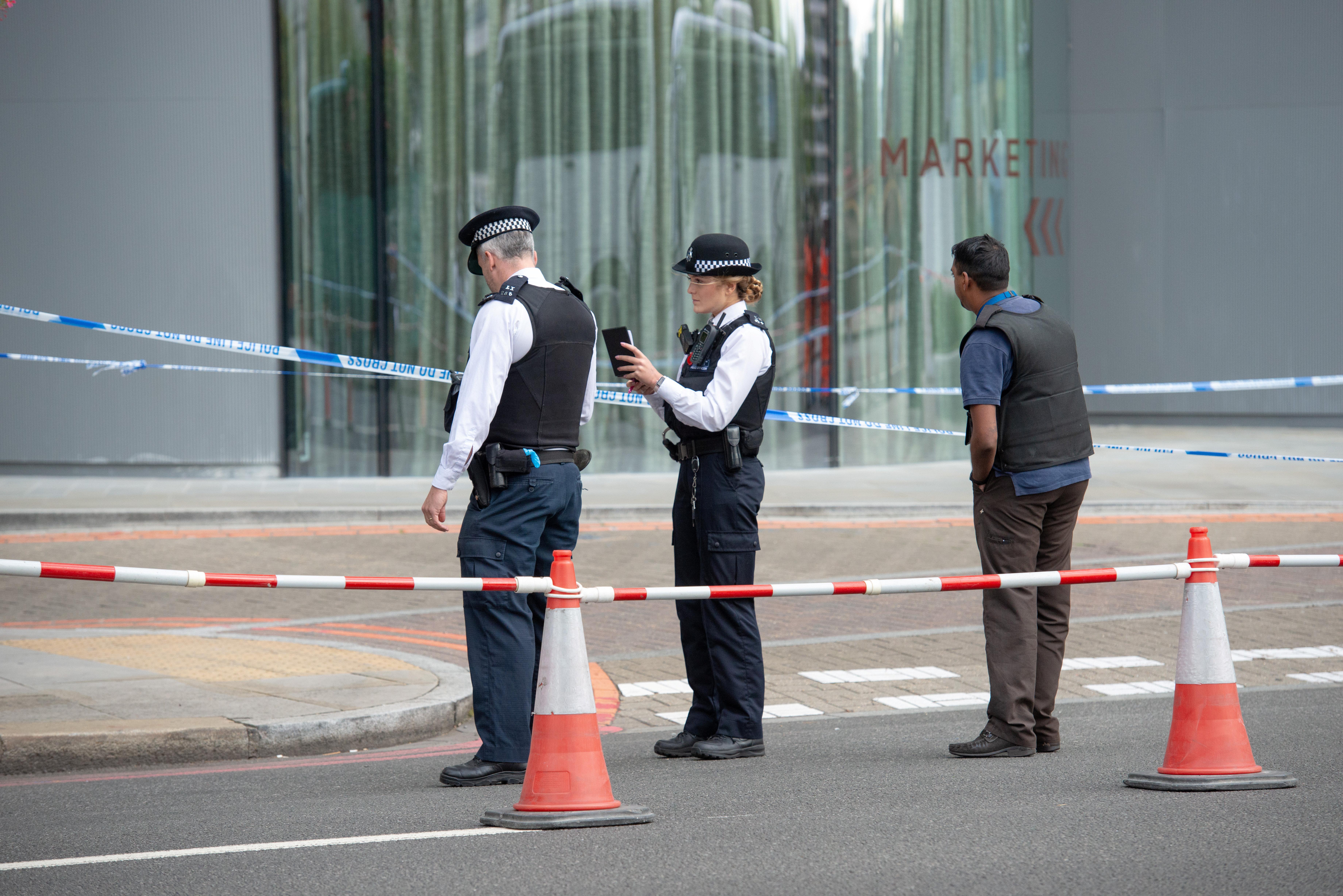 Scrap dealer Paddy Riley, 59, was driving past the Corniche when he saw the man's body lying on the ground.

He told the Sun Online: "My first thought was the man had fallen from the top of the building because a window was missing. He was covered in blood. It was very distressing to see.

"He had a blunt trauma and there was shattered glass on the ground.

"A group of workers sprinted over and I saw them pointing up at the top floor window.

"They were obviously saying it wasn’t there anymore and I saw a white sheet flapping out of the window."

According to an employee working on the adjacent building, The Dumont, Mick had left his coach and crossed the road to go to the shop next to the four star Park Plaza Riverbank Hotel. The Corniche is advertised as an “exclusive address” of two, three and four bedroom apartments and penthouses with panoramic views over the Houses of Parliament.

Designed by Foster + Partners, it is the same company responsible for the new Wembley, City Hall and the Gherkin, and properties are priced between £2.7million and £6.25million.

Met Police yesterday confirmed they had been called to the scene by the London Ambulance Service.

A spokesperson said: "The man was pronounced dead at the scene. Inquiries are under way to trace his next of kin.

“At this early stage in the investigation, it is believed he was hit by something falling from a building.”

The Health and Safety Executive has been informed.

London Ambulance Service confirmed it was called to the incident, and dispatched two motorcycle responders, a car and an ambulance.

A spokesman said: "Sadly, a person was dead at the scene."

Property developer St James said it was investigating the incident at its Corniche building.

A spokesman said: "It is with great sadness that we learnt of an incident at our Corniche development on Albert Embankment this morning, in which a man suffered fatal injuries.

"We extend our deepest sympathies to his family at this incredibly difficult time. We are investigating this incident as a matter of urgency and working with the emergency services to establish what happened."