Tokyo: Japanese Emperor Naruhito appears to be “concerned” that this summer’s Olympics in Tokyo could cause a rise in coronavirus infections, according to the head of the Imperial Household Agency.

“His majesty is very worried about the current infection situation of the COVID-19 disease,” Yasuhiko Nishimura, grand steward of the agency, told a regular news conference on Thursday, the Kyodo News agency reported. 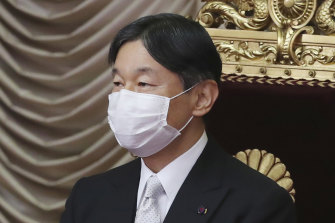 Japan’s Emperor Naruhito is concerned about the Tokyo Olympics.Credit:AP

“I suppose that he is concerned that while there are voices of anxiety among the public, the event may lead to the expansion of infections,” Nishimura said.

The emperor is honorary patron for the Tokyo 2020 Games and is widely respected in Japan, but he holds no political power.

It is rare for him to speak out on such an important and controversial topic, and his views carry weight. His warning will embarrass the government and the International Olympic Committee (IOC), but it has come too late to cause a change of heart among organisers, who are determined to start the Games on July 23, after a one-year delay due to the pandemic.

Japan’s chief cabinet secretary, Katsunobu Kato, played down the remarks, saying they represented the “view” of the grand steward. “I would like to ask the Imperial Household Agency for details, but as I have said, we will realise a safe and secure Games,” Kato said at a news conference, according to Kyodo.

David Leheny, a professor in the Graduate School of Asia-Pacific Studies at Waseda University, called the statement from the Imperial Household “very surprising,” especially because it “cuts directly at one of the most fraught topics in Japan today.”

Naruhito “knows it’s not in his power to stop the Games – I doubt he would even want it to be in his power – but I assume, like many, he’s nervous about the potential implications of the Games for public health and is signalling that he’d prefer not to be involved or that any comments he makes at the Games will be a bit more sober and less celebratory than the convening committee might want,” he said.

Organisers announced this week they would allow limited numbers of domestic spectators to attend events at the Olympics, with attendance capped at 10,000, or 50 per cent of a venue’s capacity. But they also warned that the decision could be revisited if there is an abrupt change in the pandemic situation, and on Wednesday, announced that alcohol would be banned at venues.

The government’s coronavirus advisers warned on Thursday that a rebound in cases already appears to be underway, with Tokyo recording 570 new cases on Thursday and 619 on Wednesday, both numbers more than 100 higher than the week before.

They also expressed concern that most new cases could be of the infectious Delta variant, first discovered in India, by the time the Games begin.

Japan has avoided the explosion in coronavirus cases seen in many countries, but the country has recorded about 14,500 deaths and experienced severe pressure on its economy and medical system. Its vaccination program has picked up speed in recent weeks, with more than a million shots a day being administered and 19 per cent of the population having received at least one dose.

But concerns are also mounting about keeping athletes safe, healthy and able to compete, after a second member of a Ugandan Olympic team tested positive for the coronavirus.