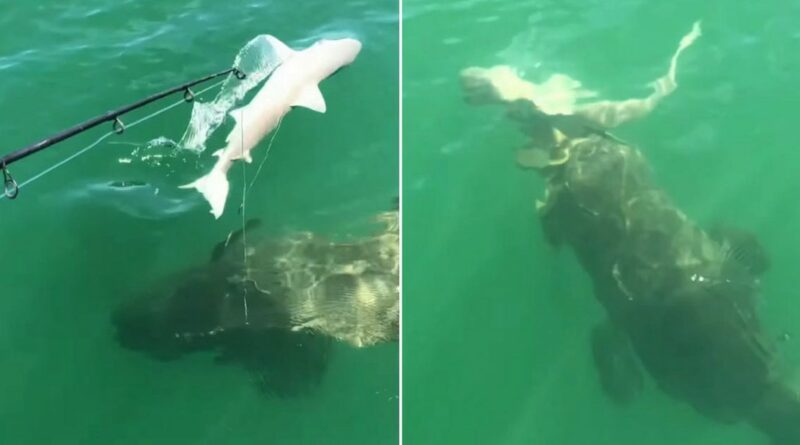 This is the astonishing moment a shark was swallowed hole by a ginormous sea creature in front of stunned fishermen.

The video shows fishing captain John Brossard and his crew trying to reel in a small shark off the coast of Goodland in Florida, US.

But they then notice three ominous dark shadows belonging to Atlantic Goliath groupers lurking beneath their catch.

Suddenly, one soars up to the surface and swallows the shark in one gulp.

John, 57, then watches in disbelief as the fish swims off with its prey and breaks their line.

“Basically we were shark fishing when all of a sudden two or three goliath groupers started hanging out under the boat waiting for our catch to come in,” he recalled.

“We were just thinking ‘wow, unbelievable! Something is going to eat a shark and it’s bigger than a shark.’

“We were very surprised. Basically it ate the shark, and took down and broke the line.

“We were using a 50-pound test line and that was not enough.”

He said they were fishing in a place that could be dangerous even to the most fearsome of predators.

“Where we were fishing is basically the Florida Everglades,” he said.

“There are sharks, alligators, crocodiles, pythons, dolphins and manatees all in one place.

“It’s the only place in the world that has all these creatures in one place and everything there tries to eat everything else.

“Bull sharks have been seen getting eaten by crocodiles and alligators sometimes, and sharks also get eaten by bigger fish there.”

It comes after scientists have revealed that a monster squid or a massive shark could be patrolling the deepest parts of the ocean.

The surprising conclusion was reached after they placed three dead alligators 6,600ft down in the Gulf of Mexico.

Chillingly, one of the carcasses was picked up by a large creature and dragged across the ocean floor.

Keep up to date with all the latest news by signing up to one of Daily Star's free newsletters here.