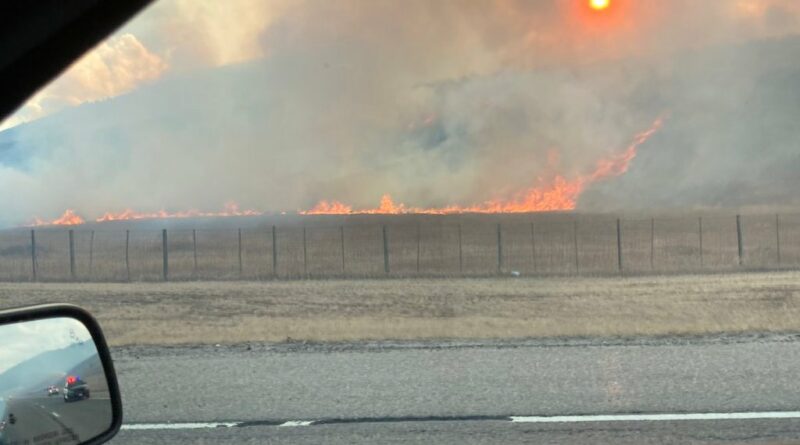 Crews are working to contain a large grass fire in Jefferson County and a portion of an apartment complex in the area has been evacuated, according to officials.

The fire is burning near where South Kipling Parkway intersects with C-470, according to a social media post sent out by the West Metro Fire Rescue district just before 2:40 p.m. Monday. The Jefferson County Sheriff’s Office specifically said it is burning on Hogback, the ridge to the west of the highway.

West Metro officials are calling it the Oak Fire. As of 3:30 p.m., two buildings in the Westerly Apartment Homes complex at 8510 S. Oak Circle has been evacuated in the wake of the blaze, district officials reported on Tiwtter.

The Colorado State Patrol has shut down C-470 between West Ken Caryl Avenue and Kipling and is urging drivers to avoid the area. There is no estimated reopening time.

The Jefferson County Sheriff’s Office, as of 3:15 p.m. Monday, said the Ken Caryl Valley area was subject to a pre-evacuation notification.

“Reminder: if it takes longer to evacuate due to medical or other reasons, residents do not need to wait to be told to evacuate. Residents can self-evacuate if they feel they should,” sheriff’s office officials wrote in a Tweet about the fire.

An evacuation center has been set up at Chatfield High School,  7227 S. Simms St. All area residents who are forced from their homes by the fire are being asked to check in at the school even if they don’t stay there, according to the sheriff’s office. Officials will take down residents’ contact information to stay in touch with them about the fire.

There are no planes or helicopters available in the area to help contain the first so West Metro is calling in help from neighboring departments.

South Metro Fire Rescue is helping fight the blaze. Officials with that district on Monday afternoon shared a photo on Twitter of the smoke plume the fire is producing. It is clearly visible from downtown Littleton.