Jeremy Corbyn is facing a huge revolt by his own MPs today after he delivered his clearest sign yet that he is willing to back a snap election in November.

In a keynote speech, the Labour leader accused Boris Johnson of ‘using the Queen’ to deliver a pre-election Tory party political broadcast at next week’s State Opening of Parliament.

But he also underlined that he is ‘ready’ to support the PM’s call for an election as soon as a Brexit extension is in place – saying he is ‘champing at the bit’ for voters to get their say.

The stance paves the way for an election at the end of next month, with Thursday, November 28 considered the most likely date.

However, Remainers are preparing an all-out bid to force a referendum to cancel Brexit first, with Labour backbenchers warning that Mr Corbyn is a ‘liability’ and an election will not resolve the issue.

There are claims up to 100 MPs could defy the whip to block a motion triggering a ballot – which requires support from two-thirds of the Commons.

Mr Johnson is desperately scrambling to find a way to break the deadlock with the EU as the clock runs down towards a crunch summit next week. 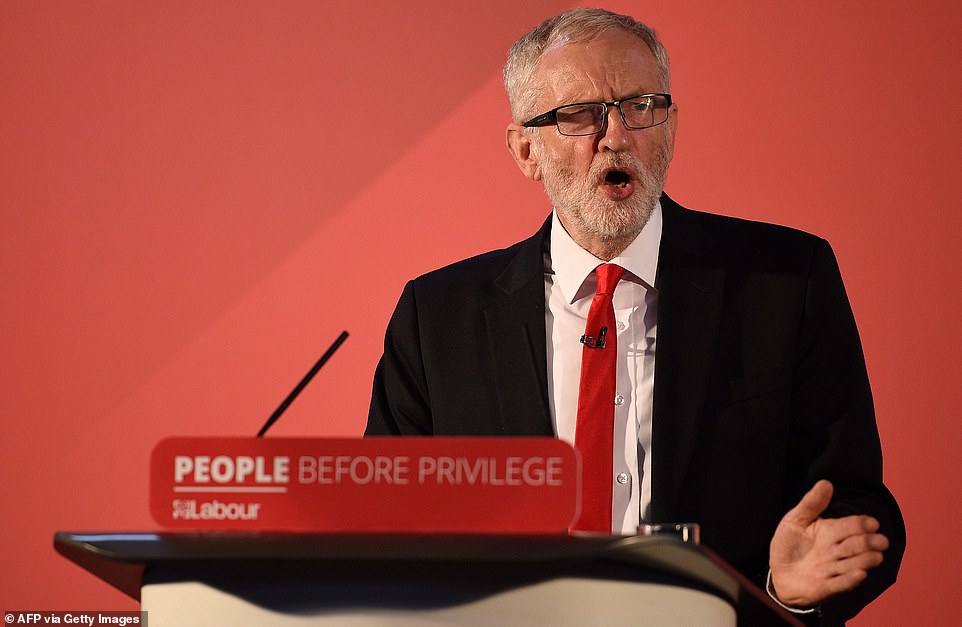 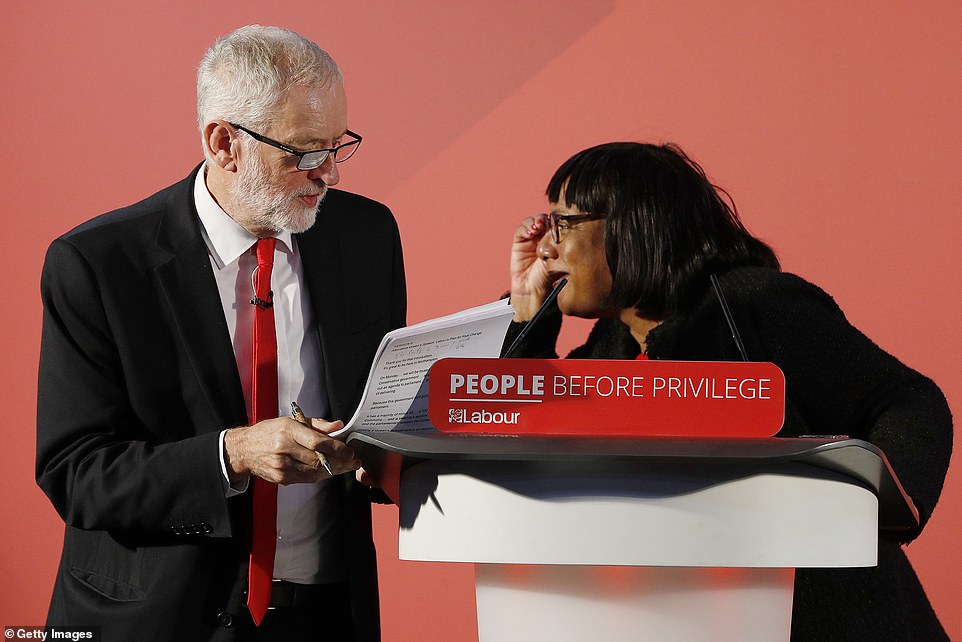 But hopes of an agreement look almost dead, and a Remainer law will kick in on October 19 obliging him to beg the EU for a delay to the Halloween exit date.

The Commons is being summoned for a special sitting that day, with Mr Johnson likely to make a big show of demanding that MPs allow him to go through with No Deal.

However, the expectation is that the government will eventually have to abide by the legislation and request an extension.

Mr Johnson has already failed two times to force an early general election, which requires backing from two-thirds of the Commons.

Mr Corbyn will signal in Northampton later that he could order MPs to vote in favour at a third attempt.

However, it is far from clear that all his MPs will follow his lead.

One shadow cabinet source told MailOnline the election would become a ‘big issue’ for the party and there is widespread support for an ‘actual confirmatory ballot’.

‘What happens if an election results in another hung parliament? (Theresa) May held an election to resolve Brexit,’ they said.

‘Tory moderates don’t want a winter general election from what we can tell.’

MPs said a meeting of the Parliamentary Labour Party recently had been ‘unanimous’ in saying there should be a referendum before an election.

What happens next in the Brexit crisis?

Here is how the coming weeks could pan out:

Tomorrow: EU’s deadline for having a deal in place ready for next week’s summit.

October 14: Parliament is due to return for the Queen’s Speech.

October 17-18: A crunch EU summit in Brussels, but Mr Johnson now seems certain to boycott the event in protest at the bloc’s intransigence.

October 19: If there is no Brexit deal by this date Remainer legislation obliges the PM to beg the EU for an extension to avoid No Deal.

Jeremy Corbyn has said that he will only let Mr Johnson trigger an election after an extension has been secured.

If there is a deal, it will start being rushed through Parliament immediately.

October 31: The current deadline for the UK to leave the EU.

One senior backbencher told MailOnline they believed Mr Corbyn would retreat in the face of massive internal opposition, including from shadow cabinet figures such as Emily Thornberry and Keir Starmer.

‘The idea of a confirmatory ballot is gathering support. As a matter of principle it should be sort Brexit first, general election second,’ the MP said.

Another Remain-backing MP said they believed the 22 former Tories will be the key to whether there is a shift towards a second referendum.

The MP, who has spoken to a number of the former Tory rebels, believes they are moving towards backing a referendum at least in part because they have no incentive to back a general election.

If most of those 21 MPs were to back a referendum the thinking is that could then prompt Jeremy Corbyn to shift Labour’s position.

The MP told MailOnline: ‘If you add them to the rest of us there is a little gap in the clouds for the plane to fly through.

‘They wanted a deal, they don’t particularly want to Remain, but they definitely fear and hate No Deal.’

On how MPs could force a vote on holding a second referendum, the MP said: ‘If the government table any motion at all they are all amendable. Now we are in a period where MPs are not just reactive but proactive so there are all sorts of opportunities.’

Tory outcasts such as ex-Cabinet minister Oliver Letwin have called for a referendum to be held first.

Former chancellor Philip Hammond added his weight to the argument this morning, telling BBC Radio 4’s Today programme: ‘I don’t think an election solves our problem here. I would not support an election at the moment.

He said a confirmatory referendum ‘is not my preferred option’, but did not rule one out.

But a shadow cabinet minister, not normally a Corbyn loyalist, told MailOnline that those pushing for a second referendum were engaging in ‘wishful thinking’ and their plans were ‘fanciful’.

‘The facts on the ground in the end are we have a country with no government,’ they said. ‘You can share their concerns, but there never has been a majority for a second referendum in the House of Commons. The maths on that has not changed for 12 months.’

They added: ‘I can understand the wishful thinking, but we are in a mess, there has got to be a very clear route through this.

‘Our Parliament and our politics is paralysed at the most critical time when really big decisions are required, never mind about Brexit but on other fronts from a faltering economy to a flare-up in the Middle East with Turkey and Syria.

Mr Corbyn’s plans for the country

In his speech in Northampton today, Mr Corbyn set out plans to:

‘There is a lot of really big business as usual that the government is unable to cope with.’

In his speech in Northamptonshire today, Mr Corbyn again set out his plan for Labour to get into power, renegotiate a deal with the EU, and then hold a referendum between that package and Remain.

However, extraordinarily, he suggested he will not campaign for either side in the national vote.

‘Within three months of coming to power, a Labour government will secure a sensible deal, based on the terms we have long advocated and discussed with the EU, trade unions and businesses, including a new customs union, a close single market relationship and guarantees of rights and protections,’ he said.

‘Within six months of being elected we will put that deal to a public vote alongside remain.

‘And as prime minister I will carry out whatever the people decide.’

Mr Corbyn said the Queen’s Speech on Monday would be a ‘farce’.

‘This Government isn’t going to put any legislation before Parliament,’ he said.

‘It has a majority of minus 45, a 100 per cent record of defeat in the Commons and is seeking a general election which will end the parliamentary session the Queen is about to open.

‘Holding a Queen’s Speech before an election is a cynical stunt.

‘Johnson is using the Queen to deliver a pre-election party political broadcast for the Conservative Party.’

The Labour leader insisted the issue of a no-deal Brexit had to be sorted out before a general election because Mr Johnson could not be trusted.

Mr Corbyn said: ‘Prime Minister, we can’t trust you not to break the law because you’ve got form.

‘We can’t trust you not to use the period of an election campaign to drive our country off a no-deal cliff edge that will crash our economy, destroy jobs and industries, cause shortages of medicine and food and endanger peace in Northern Ireland. 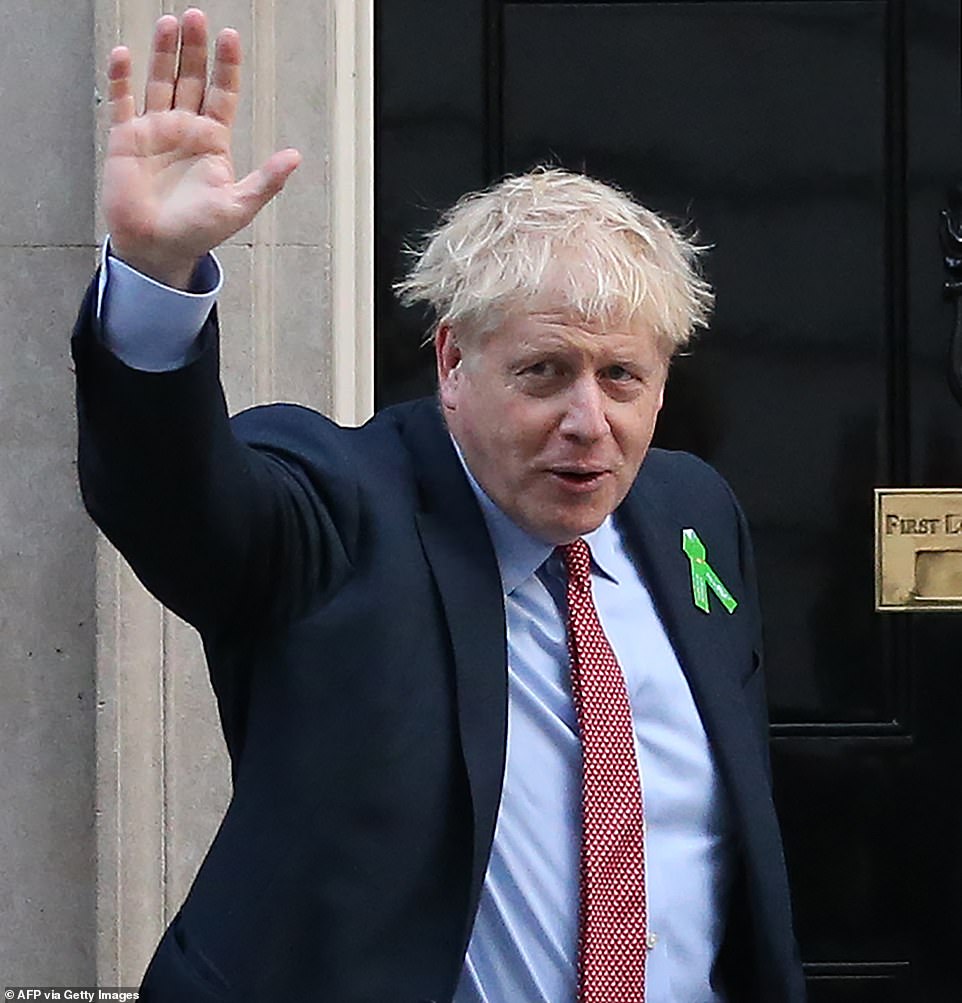 The Labour leader is set to say that the country could not trust Boris Johnson ‘not to break the law’. Pictured: PM in Downing Street today

‘So it’s simple: obey the law, take No Deal off the table and then let’s have the election.

‘We’re ready and champing at the bit.

‘There’s only one reason it hasn’t happened yet – we can’t trust you.’

Mr Corbyn will lay out his alternative Queen’s Speech, calling it ‘the most radical of modern times’.

Mr Corbyn’s speech is also set to say: ‘We might be just weeks away from the first Queen’s Speech of a Labour government.

‘And in that Queen’s Speech, Labour will put forward the most radical, hopeful, people-focused programme in modern times: a once-in-a-generation chance to rebuild and transform our country.’

Mr Johnson was accused of dragging the Queen into politics over his bid to suspend Parliament.

The Prime Minister was heavily criticised after a Supreme Court ruling last month found there was no ‘reasonable justification’ for his advice to the monarch to prorogue Parliament for five weeks in the run-up to the State Opening.