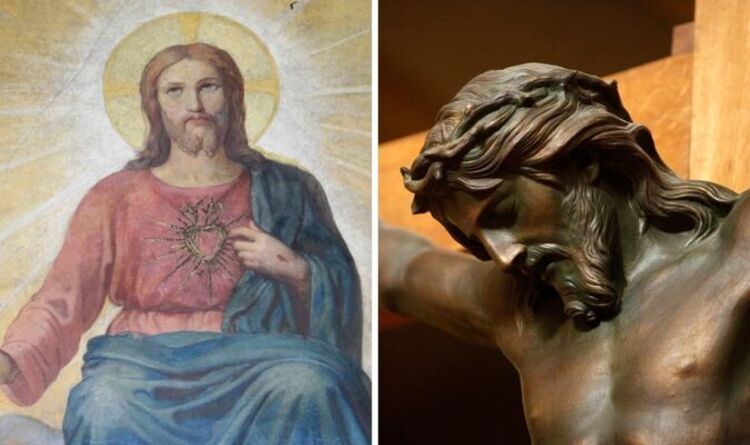 Today marks Good Friday, the Friday before Easter Sunday, and a day when Christians the world over mark the death of Jesus Christ. Traditionally, Good Friday is the day Jesus was crucified for the sins of the world, and his death at Calbary. It is observed during Holy Week as part of the Paschal Triduum, the three days which commemorate Jesus’ crucifixion, death and resurrections.

Many Christians prepare for the three-day event by fasting for 40 days, as well as offering prayer.

The passage of Easter is taught across the nation, with school children learning more about Jesus’ life and message, particularly across the Bank Holiday.

But what remains unknown is exactly what Jesus would have looked like were he alive today.

For generations, in Western cultures, Jesus is often depicted as a bearded, fair-skinned man, who has blue eyes, along with long, light brown, or blond, hair.

According to History.com last year, any description of Jesus’ physicality has been left out of the Bible, but the evidence available suggests “he probably looked very different from how he has long been portrayed”.

This view was shared by Joan Taylor, a professor of Christian Origins and Second Temple Judaism at King’s College London, who argued many of the traditional ideals of Jesus’ appearance were likely way off the mark.

Writing for the BBC in 2015, the author of The Essenes, the Scrolls and the Dead Sea, noted how to start with, Jesus’ “facial features were Jewish”, as he religious beliefs are “certain… and repeated in diverse literature, including in the letters of Paul”.

Ms Taylor cited the Letter to the Hebrews as confirmation of this, which states “it is clear that our Lord was descended from Judah”.

In 2001, the BBC, alongside forensic anthropologist Richard Neave, attempted to create a model of how a Galilean man might look from a skull that was unearthed in the region.

As part of Son of God, a face was reconstructed to depict someone similar to how Jesus may have looked, and is different to others made from the same time period.

Mark Goodacre, a historian from the University of Birmingham, noted on the show how Jesus’ skin would have been “olive-coloured2 and “swarthy” from the research offered, a very different make-up to that often associated with Western imagery.

The expert also argued that Jesus would have had “short, curly hair and a short-cropped beard”.

And Ms Taylor admitted the findings went against the longstanding theory of what he may have appeared like “since we are never told he never looked so distinctive”.

She wrote: “Whatever some artists may imagine, such as the creator of this fresco in Crete, Jesus is unlikely to have had blue eyes.

“For all that may be done with modelling on ancient bones, I think the closest correspondence to what Jesus really looked like is found in the depiction of Moses on the walls of the 3rd Century synagogue of Dura-Europos, since it shows how a Jewish sage was imagined in the Graeco-Roman world.

“Moses is imagined in undyed clothing, and in fact his one mantle is a tallith, since in the Dura image of Moses parting the Red Sea one can see tassels (tzitzith) at the corners.

“At any rate, this image is far more correct as a basis for imagining the historical Jesus than the adaptations of the Byzantine Jesus that have become standard: he’s short-haired and with a slight beard, and he’s wearing a short tunic, with short sleeves, and a himation.”

The Bible itself doesn’t make many references to exactly what Jesus may have looked like physically, which is why many theories have been made to solve the riddle.

History.com’s Sarah Pruitt explained that most knowledge on Jesus’ appearance comes from the first four books of the New Testament, as well as the Gospels of Matthew, Mark, Luke and John.

These consider Jesus to be a “Jewish man born in Bethlehem and raised in the town of Nazareth, in Galilee (formerly Palestine, now northern Israel)”.

She added: “We know Jesus was about 30 years old when he began his ministry (Luke 3:23), but the Bible tells us virtually nothing about what he looked like―except that he didn’t stand out in any particular way.

“When Jesus was arrested in the garden of Gethsemane before the Crucifixion (Matthew 26:47-56) Judas Iscariot had to point Jesus out to his soldiers among the disciples―presumably because they all appeared similar to one another.”