Tatty old bras? Now John Lewis will buy them back to help reduce the 300,000 tonnes of clothing sent to landfill each year in the UK

Skirts and tops lurking in your wardrobe that are dated, tired or no longer fit could soon become money in the bank.

John Lewis will offer to buy back items bought from its shops or website in the past, including dresses, trainers and even old bras and damaged gloves.

It will send a courier to shoppers’ homes to collect products once they have a total buy-back value of at least £50.

The move, which the retailer says is a high street first, is designed to help reduce the 300,000 tonnes of clothing sent to landfill each year in the UK. 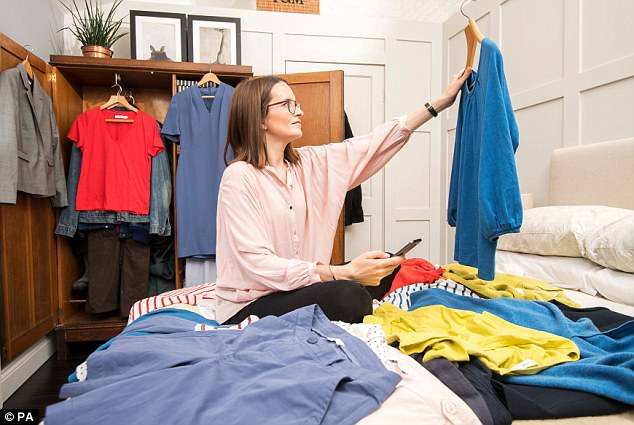 A courier will be sent shoppers homes to collect the items that they wish to sell back. Pictured a shopper going through her old clothes 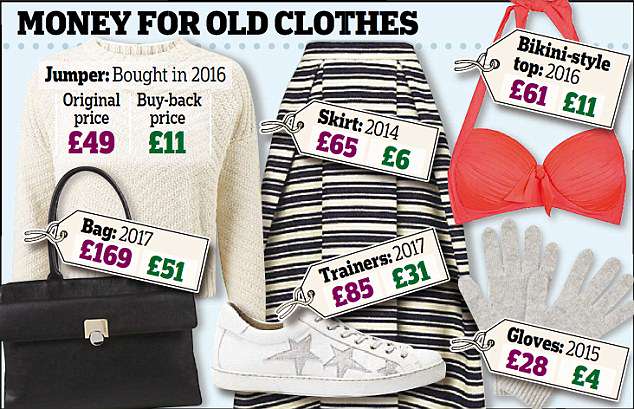 Bikinis, trainers, bags, jumpers, skirts and gloves are among the items to be bought back

A spokesman said customers would receive payment for the items on a John Lewis electronic gift card. Trials of the service – which operates via an app set up in partnership with social enterprise Stuffstr – involving 100 customers have provided examples of how much shoppers could receive for their old clothes.

The bought-back clothes will either be resold, mended to be resold, or recycled.

Martyn White, sustainability manager at John Lewis, said: ‘If the concept proves successful, the next stage will be to offer an option for customers to donate the money to charity.’ Last year, John Lewis reused more than 27,000 electrical products and around 2,000 sofas, and recycled materials from 55,000 mattresses.

Stuffstr chief executive John Atcheson said: ‘This service gives customers an incentive to buy high-quality, longer-lasting products, and buying such products is a win for both customers and the environment.’

The Ellen MacArthur Foundation, which lobbies for a ‘circular economy’, has called on other stores to follow suit. Marks & Spencer already has a ‘Shwopping’ initiative, where customers put old clothes in boxes in stores – without payment – to be resold, reused or recycled to raise funds for Oxfam. H&M also offers a £5 voucher for every bag of unwanted clothing or textiles donated in store.