An attempt by John McDonnell to give Philip Hammond a book as a leaving present backfired today as it emerged the author had questioned the extent of anti-Semitism within the Labour Party.

Mr McDonnell gave the Chancellor, who is expected to be sacked by the next prime minister, a copy of a book about ‘rebel’ walks in London for him to enjoy if and when he becomes a backbench MP.

But the book, called Rebel Footprints: A Guide to Uncovering London’s Radical History, was written by David Rosenberg who has previously faced criticism over comments on Labour anti-Semitism.

Mr Rosenberg wrote earlier this year that certain moderate Labour MPs had sought to ‘undermine the leadership’ of Jeremy Corbyn over the ‘very largely concocted allegations of antisemitism in the Party’. 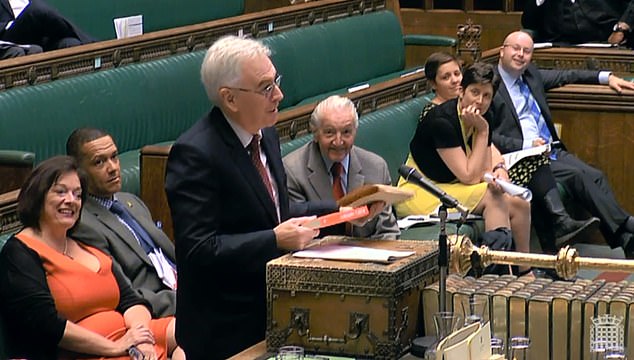 John McDonnell, pictured in the House of Commons today, produced a ‘little red book’ to give to Philip Hammond as a leaving present 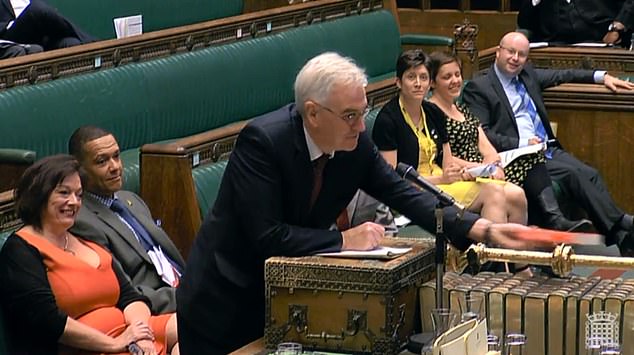 Mr McDonnell made headlines in 2015 when he tossed a copy of Communist dictator Mao Tse-Tung’s Little Red Book at George Osborne in the House of Commons as he responded to the autumn statement.

Mr McDonnell sought to repeat the stunt today with a different ‘little red book’ as he told MPs: ‘This may be the Chancellor’s last treasury questions and I just want to thank him for the civility with which he has always maintained our relationship, admit also that at times we have enjoyed his dry sense of humour.

‘I gave his predecessor a little red book as a present.

‘We have another red book but this is a guide to London’s rebel walks and we hope he will enjoy it in his leisure periods.’

Mr Hammond replied: ‘Let me say first of all that is very kind and I much prefer this little red book to the one that he gave to my predecessor although I have to say I haven’t read this one and I have read the other one.’

‘Do these names look at all familiar? They have been at the heart of campaigns against Jeremy Corbyn in the Labour Party, not least on the very largely concocted allegations of antisemitism in the Party, and they have sought to undermine the leadership on several other issues too.’

He also used a column in the Morning Star newspaper in July 2018 to urge Dame Margaret Hodge to stand down as a Labour MP as he accused her of wielding ‘her family’s Holocaust history as a weapon’. 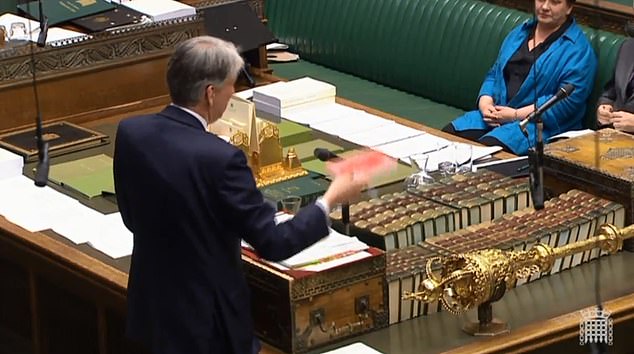 The Chancellor appeared happy to have received the gift, the giving of which drew comparisons to when Mr McDonnell had given George Osborne a copy of Mao’s Little Red Book during the autumn statement in 2015

What is Mao’s ‘Little Red Book’?

John McDonnell quoted from the Little Red Book of quotations by Mao Tse-Tung as he responded to the autumn statement in 2015.

He poked fun at ‘Comrade Osborne’ over the then-chancellor’s decision to sell off state assets to China.

But his decision to quote from the book and then hand it to Mr Osborne sparked controversy.

Critics questioned the wisdom of quoting the Communist dictator who has been blamed for the Great Chinese Famine which cost the lives of as many as 45 million people from starvation between 1959-61.

The book itself, first published in 1964, consists of a series of statements from speeches by the Chinese leader who was the chairman of the Communist Party of China from 1943 to 1976.

The Tories made great political capital out of the moment as they used it to paint Labour under Jeremy Corbyn as dangerously left-wing.

It is understood that Mr McDonnell totally disagrees with the views expressed by Mr Rosenberg.

The shadow chancellor was grilled about Labour’s anti-Semitism crisis on Sky News on Sunday when he said: ‘What angers me is that we are an anti-racist party.

‘We should be leading the campaign against antisemitism in society overall, and this is holding us back.

‘What we’ve got to do is move forward now and I think the investigation by the EHCR will help us in doing this, whatever recommendations come out of that we must adopt and hopefully then have a clean bill of health.’

It came as a poll revealed heavy support for controversial MP Chris Williamson to be reinstated despite him saying Labour was ‘too apologetic’ about anti-Jewish abuse.

Some 61 per cent of readers of the left-wing website LabourList backed reinstating the Derby North MP, who has yet to have the whip returned after plans to let him off with a warning sparked uproar among MPs.

However, in the same poll of more than 10,000 people almost three quarters (74 per cent) said that Labour should introduce an independent complaints procedure after criticism of the current party process. 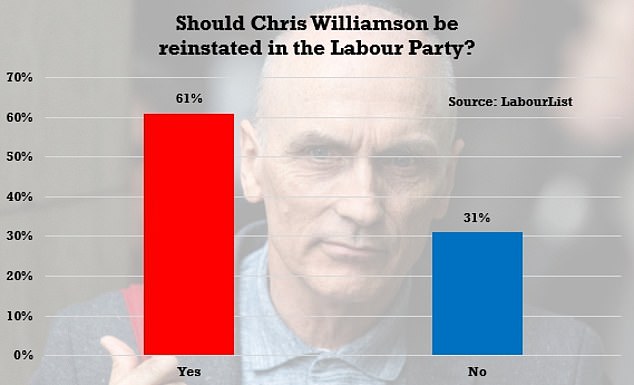 The party bowed to a widespread revolt on Friday – including shadow ministers – over the reinstatement of the Derby North MP by halting plans to restore the party whip.

Mr Williamson had been let off with a warning after a pattern of behaviour that including saying the party was ‘too apologetic’ about cases of Jew-hate in February.