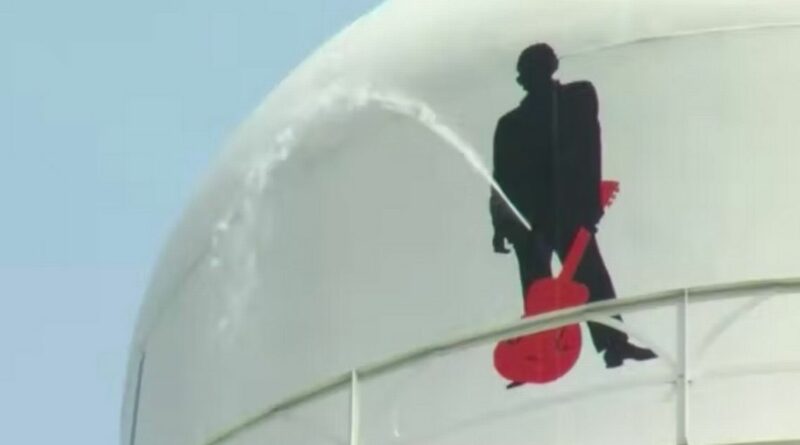 A water tower tribute to musician Johnny Cash has left a mayor furious after a lone gunman caused some very awkward damage.

The tower, which features an outline of the Man in Black with a red guitar was damaged after a bullet was fired at it, right into the crotch of the silhouette.

An act of vandalism to the Kingsland, Arkansas mural has left town mayor Luke Neal raging after the Ring of Fire and Folsom Prison Blues singer had his tribute graffitied.

The hometown hero was spotted plastered onto the side of a water tower, where thanks to gun damages, makes it look as though Cash is relieving himself on the town.

The Rock and Roll Hall of Fame inductee was brought up in Kingsland, and officials of the town commemorated Cash's heritage with a water tower tribute.

It was soon hit with a single bullet hole, aimed right at the crotch of the acclaimed artist, making for a slow trickle of water escaping from the tower.

Town mayor Luke Neal, speaking to KLRT, said: "Somebody shot our water tower, shot the silhouette of Johnny Cash in a very sensitive area. It's been leaking for the last – almost week."

The lengthy-looking wee for the country singer, known for his late-career American Recordings, has seen a new wave of attention presented to the town's inhabitants, with some seeing the lighter side of the damage.

Others, like mayor Neal, have pointed out that the logistics of a bullet hole repair are causing massive headaches and expensive fixes.

Since the bullet hit the Man in Black, the tower is said to have lost 30,000 gallons of water a day, The Independent reports.

Because of the damage, the town has had to switch to a different water line, which Neal says means the town is drinking water that is "discoloured," rather than the water now leaking from Cash's crotch.

If caught, the person responsible could face a felony charge for tampering with a vital resource to the community, and an investigation is currently underway.