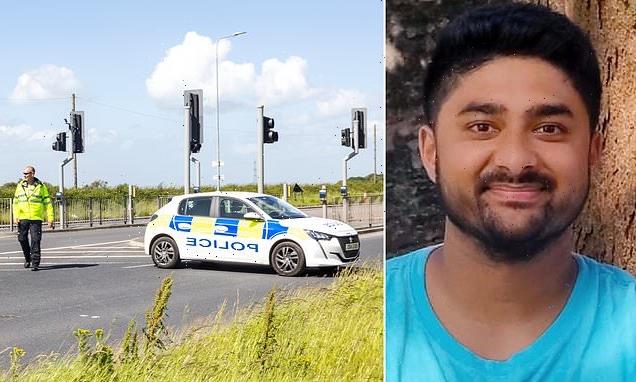 Junior doctor, 27, killed when his car swerved into oncoming traffic may have fallen asleep at wheel after nightshift, inquest hears

A junior doctor who died when his car swerved into oncoming traffic could have fallen asleep at the wheel following a nightshift, an inquest heard.

Dr Jyothis Manalayil, 27, died in a horror crash after he had finished his shift at Lancaster Royal Infirmary Hospital and was driving to Royal Victoria Hospital Blackpool to teach young medical students.

Blackpool and Fylde Coroners Court heard how the junior doctor had been driving along the A586 Garstang Road, Lancashire at around 10.30 am when the accident took place.

His black Kia car first drove into the opposite lane on a bend, before it swerved back and crashed into an oncoming Range Rover that had tried to avoid it. 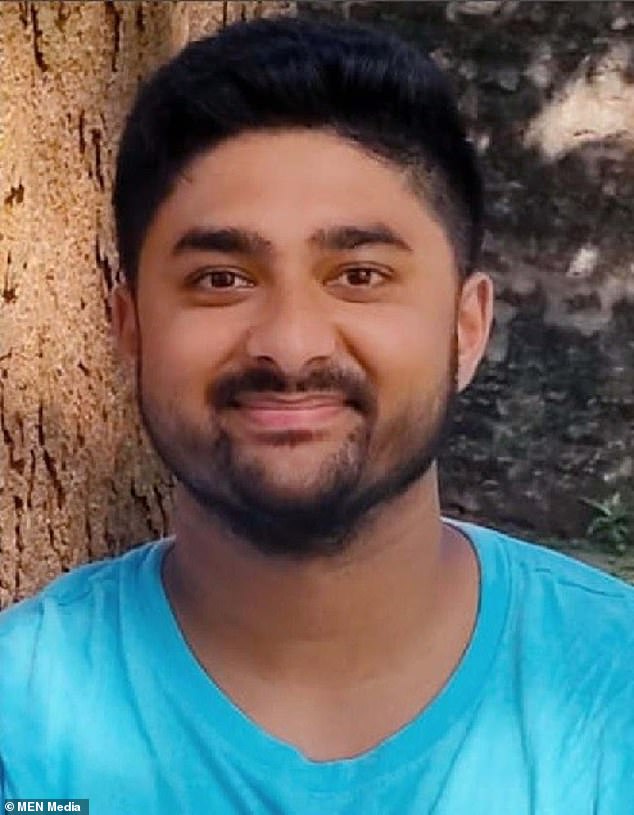 Dr Jyothis Manalayil, 27, died in a car accident after he swerved into a different lane. He had finished his nightshift and had been travelling from the Lancaster Royal Infirmary Hospital and was driving to Royal Victoria Hospital Blackpool to teach young medical students

Paramedics arrived at the vehicle a short time later, but the doctor was sadly pronounced dead at 11.14am on June 10 after suffering a cardiac arrest.

Speaking at the hearing, Coroner Alan Wilson concluded Jyothis’s death resulted from a road traffic collision, while adding that his ‘fatigue’ could have been a factor.

He said: ‘He didn’t seem to be driving at excessive speed.

‘That gives two possibilities, that he simply was distracted by thinking about something else an at the wrong time lost concentration, or that he fell asleep.

‘We know he is a junior doctor working long hours and it could have been just fatigue.’

Thomas Evans told the inquest he had been driving behind the Range Rover with his partner, Jessica Slattery, when he saw the doctor’s vehicle approaching him.

He then said he saw the black Kia suddenly swerve into the path of oncoming traffic and head towards the 4×4 vehicle.

Mr Evans said the Range Rover did swerve to the opposite lane to avoid it, but the two vehicles had struck each other when the Kia then went back into the correct lane.

He judged that the Range Rover was travelling under the speed limit of 50mph on the road.

Mr Evans stopped his car and then went over to Jyothis and performed emergency resuscitation on him, managing to make him breathe every 10 seconds or so.

Paramedics then arrived at the scene, including Patrick Selby, who was working as a rapid response senior paramedic at the time and gave evidence to the inquest.

He said that Dr Manalayil had suffered a cardiac arrest and paramedics tried various methods to stabilise him, including advanced airway management.

But the inquest heard despite their efforts, Dr Manalayil was pronounced dead at the scene. 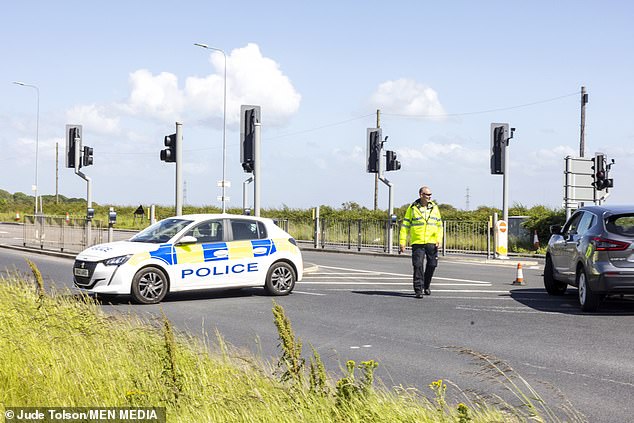 Blackpool and Fylde Coroners Court heard how the junior doctor had been driving along the A586 Garstang Road, Lancashire (pictured) at around 10.30 am when the accident took place

Pathologist Dr Darek Golka ruled his medical cause of death as internal haemorrhage, in turn caused by blunt trauma to the chest, which resulted from a road traffic accident.

He added that the young doctor had suffered ‘significant blood loss’, and he described it as a fatal event and that the injuries suffered caused ‘catastrophic damage’.

PC Matthew Burn of the forensic collision investigation unit, who investigated the crash, found that Dr Manalayil had not been wearing his seatbelt during the crash.

He told the inquest how electronic data recordings extracted from the car showed how the 27-year-old had not been breaking the speed limit, travelling at 39mph.

However, the data for the steering showed a turning angle of 125-140 degrees to the left one second before the crash, being ‘indicative of panic steering’, PC Burn said.

PC Burn also found no evidence of the car bouncing off a kerb.

Mr Wilson told the hearing that he would record the death as a road traffic collision, adding that the young doctor was ‘clearly an impressive man’.

He said: ‘I’m going to record that this was a death due to a road traffic collision.

‘He was a clearly an impressive man, with supportive family and friends here in large numbers.’

The doctor’s grieving family previously paid tribute to the doctor, releasing a statement through the police in which they described him as ‘unusually kind’ and ‘exceptionally bright’.

The statement read: ‘Jyothis was a loving son to his mum and dad and an angel guardian to his younger brother.

‘Jyo had a passion for mental health awareness in addition to improving equality and diversity in the NHS workplace. He was compassionate, dedicated and always strived for the best in his career as a trainee anaesthetist.

‘He always went the extra mile for his patients whether it was organising their dental appointments or just making them a cup of tea and sharing his terrible jokes.

‘Jyo was ambitious about his career and continued to excel in his work. He was particularly passionate about teaching, including directing advanced life support courses, delivering teaching on delirium and supporting medical students.

‘He cared about his colleagues deeply and went out of his way to make you feel loved, valued and supported. He always had time to listen to his colleagues’ concerns and worries and was always ready to help those who were struggling.’