Business Secretary Alok Sharma led calls this week urging firms to get workers back to their desks.

But he faced accusations of hypocrisy last night after just 5 per cent of his own department’s 1,800 staff arrived at its central London HQ.

Just 95 were seen entering the Whitehall building on Thursday morning, even though the Government has urged the country – and its own 430,000 workforce – to return to their desks.

Earlier this week, Mr Sharma said: ‘If you need to come in you should. I hope what we will see is people coming back into the workplace and, yes, I personally would like to see London vibrant again.’ 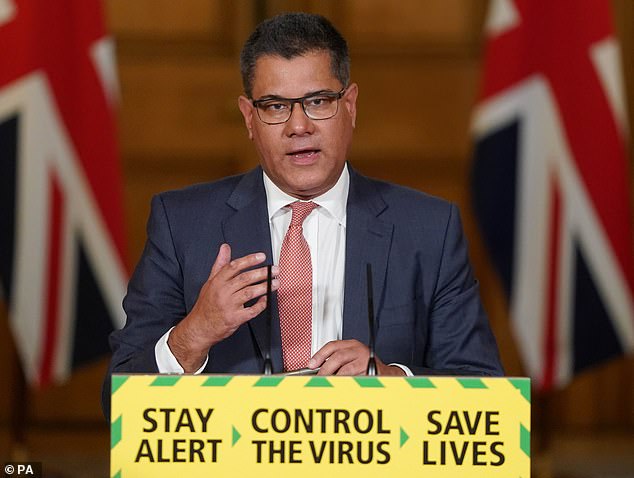 Business Secretary Alok Sharma led calls this week urging firms to get workers back to their desks. But he faced accusations of hypocrisy last night after just 5 per cent of his own department’s 1,800 staff arrived at its central London HQ

The Mail has monitored the number of staff going to work at several Whitehall departments between 7.15am and 11am in the past month.

Just 39 entered the Department of Work and Pensions on Wednesday, which is 18 less than a fortnight ago and equates to just over 2 per cent of the 1,700 who worked there before lockdown.

At the Department for Education there was still very little change in numbers, with only 3 per cent of staff turning up on Wednesday.

Its boss Gavin Williamson was among 64 people seen entering – an increase of just two in a fortnight.

A recent Mail poll found 51 per cent of Britons believed civil servants should set an example to the country. 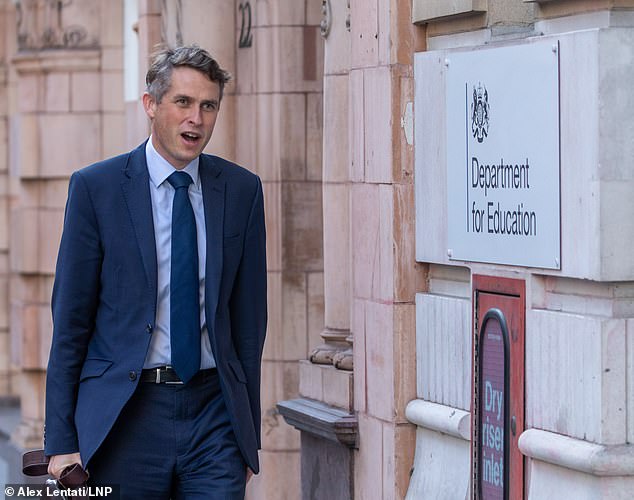 At the Department for Education there was still very little change in numbers, with only 3 per cent of staff turning up on Wednesday. Its boss Gavin Williamson (pictured) was among 64 people seen entering – an increase of just two in a fortnight.

Attendance across other Whitehall departments remains low, but the number seen to return is beginning to increase slowly.

The largest increase was at the office housing more than 2,200 staff from the Treasury and the Department for Digital, Culture, Media and Sport, where 227 signed in – up from 178 two weeks ago.

Meanwhile, 238 staff arrived at the main entrance to the Home Office headquarters – up from 198.

A Government spokesman said: ‘It is safe to return to a Covid-secure workplace and government departments have ensured appropriate measures are in place to enable as many civil servants as possible to return safely.’

Transport Secretary Grant Shapps was also accused of hypocrisy yesterday after urging Britons to get back to work.

When an interviewer pointed out to him that he was still at his Hertfordshire home, Mr Shapps said he had commuted to the Department for Transport ‘on an ad hoc basis’.

By Jason Groves for the Daily Mail

Boris Johnson was on a collision course with the unions last night as he prepared a fresh push next week to get all civil servants back to their desks to ‘set an example’.

Downing Street sources said the Prime Minister was determined to get ‘every’ official back to demonstrate a safe return to work is possible.

However, unions have warned that any attempt to force civil servants to return could result in ‘industrial unrest’.

Britain’s human rights watchdog also signalled its opposition, saying the country had proved it could ‘work flexibly’ and ‘we cannot backtrack now’.

The PM ordered departments to draw up plans in July for a phased return to work following the lockdown which saw at least 95 per cent based at home for months. But a Downing Street source acknowledged progress had been ‘slow’.

They said: ‘You will see a more firm direction to Whitehall to get back to the office next week. The Prime Minister is very keen on getting more people back to the workplace. 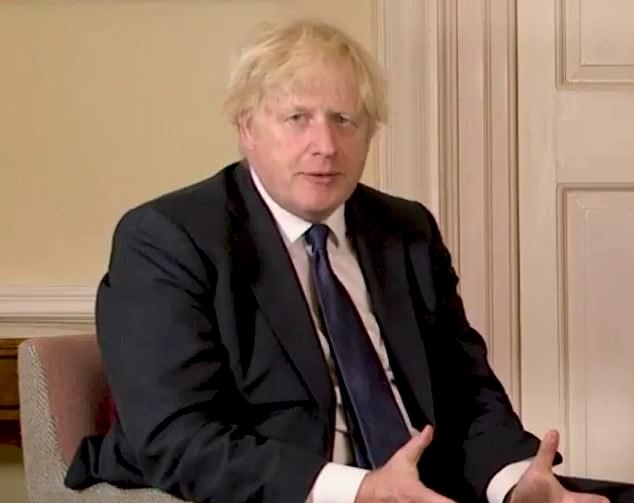 ‘The main focus has to be on getting every civil servant back at their desk. It sets an example to the rest of the country and demonstrates that it can be done safely.

‘The process has started but it has been slow. It will be accelerated now because this is a priority for the PM.’

The move will be seen as a slap-down for Health Secretary Matt Hancock who broke with the Government position this week by saying he was happy for his officials to continue working from home as long as they could operate effectively.

No official figures are available for civil servants who have returned to work so far, but insiders suggest it may be as low as 10 per cent.

Transport Secretary Grant Shapps yesterday ducked questions on his officials, but said he hoped the figure would rise to 20 per cent next week.

Ministers face a fight with the unions over the back-to-work push.

‘Millions of employees are working from home very successfully whilst employers are recognising that the world of work has changed and are embracing it.

‘The genie won’t fit back in the bottle – best not to try.’

The Public and Commercial Services Union, the largest in the civil service, previously warned that any bid to get officials back to work could lead to ‘industrial unrest’.

General secretary Mark Serwotka has written to the Government saying it is potentially illegal to move staff from one working place to another that is less safe.

A union official predicted that, despite the tough line from No10, departments would not get most staff back this year, adding: ‘We know there’s pressure. 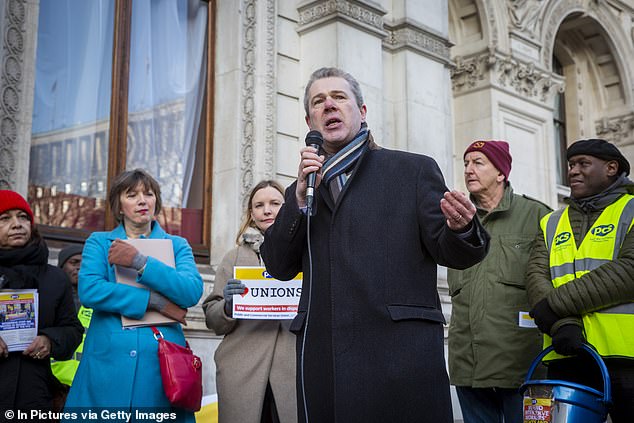 ‘We’ve seen a change in tone. But a lot of departments have been quite clear – regardless of the politics, they will not see people coming back to offices that are not Covid-secure. They’re definitely not going to get back this year.’

Ministers faced a backlash yesterday over reports that a Government publicity campaign would warn workers they could lose their jobs if they fail to return to the office.

No10 distanced itself from the suggestion the campaign would indicate people working from home are risking the sack, saying it was ‘deeply irresponsible’.

Sources said the campaign would feature adverts in local newspapers next week urging employers to make sure workplaces are Covid-secure and encouraging people to think about going back.

But one minister told The Daily Telegraph those working from home could be more ‘vulnerable’ in any company restructuring.

The Equality and Human Rights Commission said there should be ‘no question of people’s jobs being vulnerable if they do not return to the office’.

Its interim chairman Caroline Waters said: ‘Having seen how it is possible to work flexibly and retain productivity, we cannot backtrack now.’

Scottish First Minister Nicola Sturgeon said she would not ‘intimidate people back to work’.

The Labour-run Welsh government yesterday said it would continue to advise people to work from home ‘where possible’.

‘Start playing your part to save city centres’: Council chiefs are urged as they say up to eight in ten workers will not be expected to return until next year

By David Churchill for the Daily Mail

Town halls were last night urged to ‘play their part’ by getting more workers back into offices to rescue city centre shops.

A Daily Mail audit of councils suggests only a fraction of staff have returned.

Many said up to eight in ten workers will not be expected to return until next year or until the pandemic is over.

Only a few said they plan a drive to get them back in the coming weeks.

We sent the survey to more than 80 councils. Of the 25 that responded, 21 said either only a fraction or less than 20 per cent of office workers had returned. 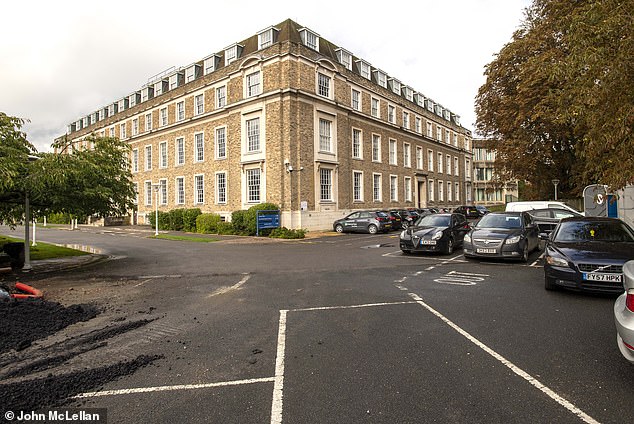 Cambridgeshire County Council in Cambridge said about 3,000 of its 4,300 staff are office-based. Of these, about 80 per cent continue to work from home 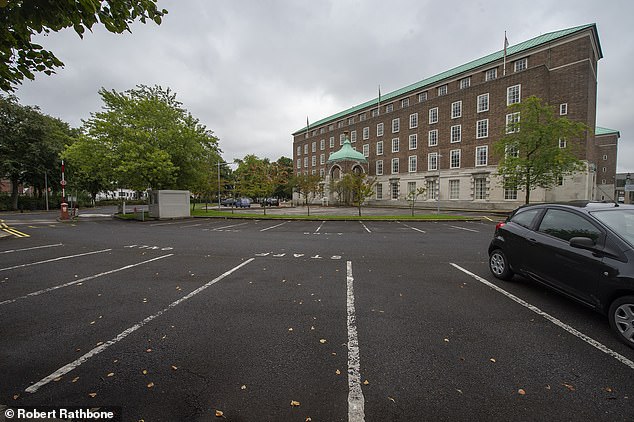 Nottinghamshire County Council in Nottingham has 8,000 to 10,000 workers. It said ‘the majority of our office staff will be remaining at home’

Several claimed no more than a fifth will return until the pandemic is over due to distancing restrictions.

But critics dismissed this, accusing unions of scaremongering public sector bosses into being overly cautious.

Local authorities in some areas are among the biggest employers.

Their staff provide crucial footfall for businesses that rely on busy offices.

The findings last night led to renewed calls for Downing Street to toughen up its ‘back to work’ message.

‘Then the Government can tell all those companies that have said “no one is going back until the New Year” that they have a duty and obligation to help the economy.

‘If people don’t return to offices, smaller businesses will crash and burn. Some of these people have probably been out in pubs and restaurants on the Eat Out to Help Out scheme, so why can’t they replicate that in their office environment?’

He also accused unions of scaremongering public sector bosses. He said: ‘The 20 per cent thing is just b*******. They are just trying to damage the Government.’

It is nearly a month since Boris Johnson heralded August 3 as the day ‘work from home’ guidance ends.

He said Britons could return to offices at the ‘discretion’ of their employers.

But the response of town halls deals a further hammer blow to commercial centres starved of customers.

London City Hall normally has 800 people working in its River Thames HQ but sources said only a ‘limited number’ are back.

A spokesman for mayor Sadiq Khan said: ‘Guidelines mean that only around 200 staff can safely work from the building.’

Kent County Council in Maidstone said it has ‘around 6,500 staff accessing remote technology, which is the vast majority of our office-based staff’. 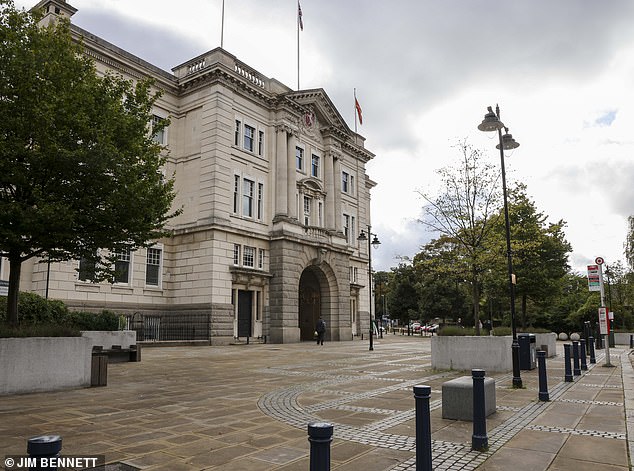 Kent County Council in Maidstone said it has ‘around 6,500 staff accessing remote technology, which is the vast majority of our office-based staff’

A spokesman added: ‘We do not expect staff who are normally office-based to return on a permanent basis until into next year, except where they need to for business.’

Cambridgeshire County Council in Cambridge said about 3,000 of its 4,300 staff are office-based. Of these, about 80 per cent continue to work from home.

It said they will only allow about 20 per cent to return if distancing guidelines are to be adhered to. Suffolk County Council in Ipswich has around 2,800 office staff but said only a fraction are back.

A spokesman said: ‘Our policy is if it’s working at home, continue to do so.’

Nottinghamshire County Council in Nottingham has 8,000 to 10,000 workers. It said ‘the majority of our office staff will be remaining at home’. 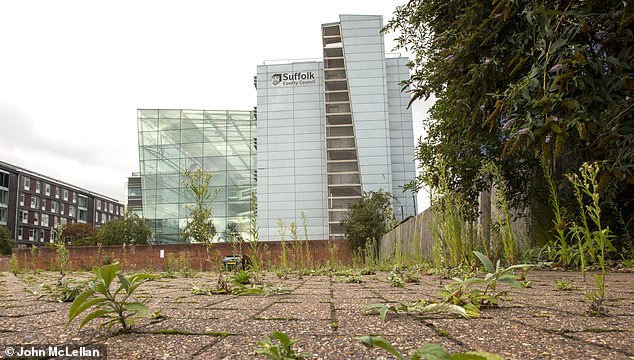 Suffolk County Council in Ipswich has around 2,800 office staff but said only a fraction are back

Exeter-based Devon County Council said office workers are ‘not expected to return unless they need to’.

It comes after figures this week revealed only around 17 per cent of staff have returned to work in the 63 biggest cities.

CBI boss Dame Carolyn Fairbairn has warned Mr Johnson must do more to get workers back at their desks.

Writing in the Mail on Thursday she said: ‘The costs of office closure are becoming clearer by the day.’

There are more than 340 councils in England which employ hundreds of thousands of people.