Home » World News » ‘Just a bit of bad luck’: Why Victoria’s last Delta outbreak was the one that got away

When Victoria’s final doughnut day was announced on August 4, the outbreak that would end the state’s “COVID zero” ambitions had already taken hold. A passenger likely infected with the virus had boarded the 412 bus from West Footscray Station in the pre-dawn gloom. Further west, the infection was already spreading at an indoor shopping mall in Caroline Springs.

So, how did the virus get here? One possibility is that the infections were a consequence of a new introduction of the Delta strain with NSW origins, which took root within just a few weeks, The Sunday Age can reveal.

Dr Norelle Sherry, a genomics expert with the Doherty Institute, said analysis of samples indicated there was “most likely” another introduction of the virus, separate to older outbreaks including a cluster seeded by NSW removalists that prompted the state’s fifth lockdown.

“Then from there, there was this kind of slow explosion of cases,” she said. “They’re all extremely similar and that just shows that it’s all been transmitted locally over a fairly short period of time.”

Another theory is that it is not a new source of infection, but a subtle change in genomics that occurred locally as the virus moved from one person to the next, potentially stemming back to an illegal visit to Coles in early July by someone meant to be isolating on a red-zone permit.

Either way, each theory helps explain why the current outbreak became the one that got away. Given the infectious variant has proven almost uncontrollable given any head start, experts say an element of good fortune is always required to bring any Delta outbreak to heel.

Meanwhile, epidemiologists say Victoria could be within weeks of turning the third wave around, if vaccinations continue to increase and if most continue to abide by COVID restrictions. The alternative could be daily cases in their thousands.

Movement trends show the resolve of Victorians to stay at home is waning, and the public is being urged to find more of what it has given after more than 220 days of lockdown to keep increasing case numbers in check.

“It’s either fear or frustration that people have at the moment,” said Deakin University’s head of epidemiology Professor Catherine Bennett. “I think we have to somehow meld that fear and frustration into just bloody minded determination.” 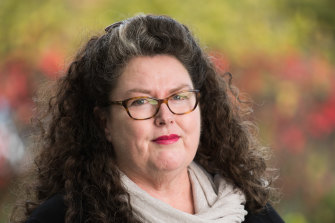 Professor Catherine Bennett “I think we have to somehow meld that fear and frustration into just bloody minded determination.”Credit:Jason South

Victoria’s final doughnut day – August 4 – started with the news that the state had reported its first day of no locally acquired cases since July 12. But the celebrations didn’t last 24 hours, interrupted by the announcement of a positive case in a teacher at Al-Taqwa College in Melbourne’s west.

Of most concern, the source of her infection wasn’t clear, and by the next day Victoria was in lockdown again, after more mystery cases appeared, including a factory worker living in Maribyrnong, who had no obvious links to the school teacher.

Since then, the outbreak has continued to bubble away in the west and taken hold in the northern suburbs, where it’s exploiting key known vulnerabilities to the virus – lower levels of vaccination, a younger and more mobile population, bigger families and people with jobs that mean they cannot stay at home.

The rates were well below the national average at the time, of just over 63 per cent, and contrast with places like Geelong and Mornington Peninsula, which have first dose rates above 70 per cent.

“It is quite challenging for people who are less socio-economically advantaged who have to continue working in the community during a lockdown,” said Associate Professor James Wood, a mathematician at UNSW’s School of Public Health and Community Medicine.

“Often their workloads can increase and it’s quite difficult to reduce their numbers of contacts, without shutting down quite important industries.”

Those who have been analysing movement data say there has been a moderate drop in compliance with public health orders, but they say this should not entirely be blamed for Victoria’s inability to contain the outbreak.

Professor James McCaw, who has provided modelling to the federal government throughout the pandemic, said the level of compliance and restrictions in place now would have been enough to contain the outbreak for previous strains of coronavirus.

”Delta is just that much harder to control,” he said. “I think this is one where we weren’t lucky enough to notice it really early. And once there’s a certain number of people in the community, Delta can be constrained, but actually getting rid [of it] is not impossible … but it’s very, very difficult [for big diverse cities like Melbourne or Sydney].”

Analysis of movement trends by The Sunday Age shows there has been a moderate increase in lockdown movement when you compare Victoria’s second wave to the third.

Movement for retail and recreation travel dipped 63 per cent below usual activity on August 9 last year – when Victoria recorded 394 cases. On August 29, when the state saw 92 infections, the same measure of movement was only down 51 per cent, and the metric further dipped to 43 per cent in early September, reflecting similar behaviour to the final stages of the second wave last year.

University of Melbourne scientific modeller Jason Thompson, who has tracked mobility and movement in Victoria throughout its lockdowns, estimates movement was higher by between 10 and 15 per cent in Victoria, compared to August last year.

But he said to blame the rapid spread on an increase in people moving around would be too simplistic.

“This all comes down to things that are being raised across Australia about who’s going to be left behind in this vaccination race,” he said.

Western suburbs general practitioner Hanna El-Khoury said more than 50 of his patients had tested positive to coronavirus in the latest outbreak.

Dr El-Khoury said while it may appear to an outsider that infections were escalating in the north and west due to people illegally mingling, the reality was different.

He is adamant that spread is not being fuelled by illegal gatherings, but by young adults, who are generally unvaccinated essential workers, who are being infected at work and taking the virus home with them.

“This has now really become the outbreak of young families,” Dr El-Khoury said.

In the past three days, Dr El-Khoury has provided telehealth appointments to three families in Altona North, where there are almost 130 active cases. Each of the families had eight to 10 members who all tested positive to the virus while living under the same roof.

“That’s 30 new cases in a day that when you look at it closely are just three families,” he said. “And we are seeing this pattern every day.”

Professor Bennett said the early signs were that the Delta outbreaks in NSW and Victoria could be controlled, aided by experienced contact tracing teams in both states.

But she said the incubation period of Delta was two-days shorter than previous strains, causing the virus to skip ahead of officials.

“They were the two days we needed,” she said. “That two days was what we were using before to always be just that one day in front, and now with this variant, you’re one day behind, so that’s a game changer.”

Victorian officials investigating a cluster at the MCG in July were surprised to discover a Trinity Grammar teacher who picked up the virus at a football game begun spreading the infection just 30 hours later.

The state’s latest wave of infections started when Melbourne was further along with its vaccination rollout than Sydney – prompting a number of experts to predict that cases should peak below NSW, now reporting around 1500 cases each day.

“I’d be very surprised if the numbers in Melbourne got to the same level as we are seeing here in NSW,” said Professor Wood. “It might continue to rise for a little bit over the next few weeks until Victoria catches up with its vaccine coverage.”

Professor McCaw said he expects NSW’s case numbers to peak soon and is also hopeful that Victoria could follow soon after, saying while the situation was still “highly uncertain”, his team’s estimates show there is a 75 per cent chance Victoria’s wave could peak within the next three weeks.

The alternative is that numbers will continue to increase – meaning Victoria is heading into a crucial period that could determine if the worst will be soon over, or there will be escalating numbers and more sick young Victorians in hospital.

“If people’s compliance drops or vaccination stalls it will just get worse and worse. If people remain or increase compliance… and vaccination rollout accelerates then that peak could come earlier and would be lower.”

Victoria’s reproduction rate – which estimates the average number of cases each person passes the virus onto – sits at about 1.5, and Professor Bennett said while more vaccinations would bring that down, improved compliance could mean Victoria’s third wave was flattened faster.

She said the infectiousness of the Delta strain meant it was now much harder to get away with little departures from public health orders, like having a maskless conversation outdoors.

“If everybody just held their breath for two weeks, did bigger shops less often, if everyone just pulled it in that little bit, it would work a little bit better,” Professor Bennett said.

“It just might be that thing where we found that last bit of lockdown in us that will put us in a better position to never have a lockdown again.”