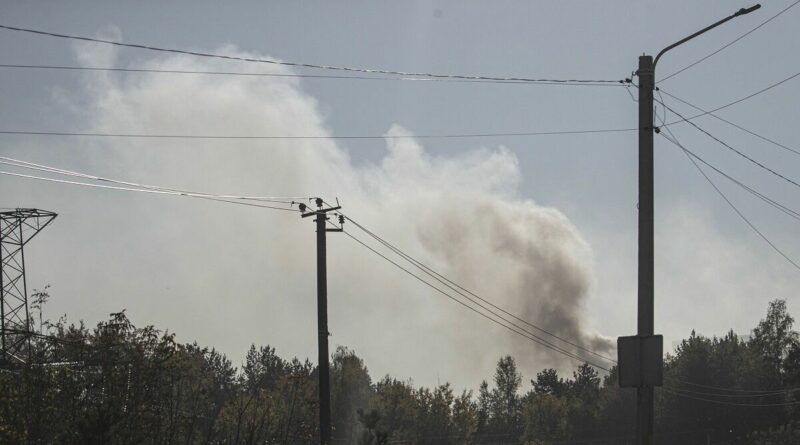 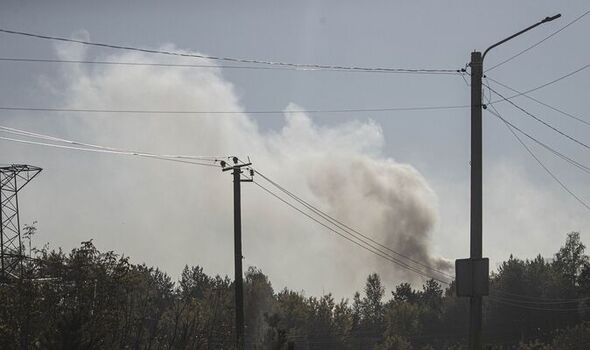 Ukraine’s president Volodymyr Zelensky said Kremlin forces bombarded the country with the Iranian-made weapons “all night and all morning”, to “terrorise” civilians. But he warned: “The enemy can attack our cities, but it won’t be able to break us. The occupiers will get only fair punishment and condemnation of future generations. And we will get victory.”

Five major blasts rocked the capital Kyiv from 6.30am, killing three civilians and burying the injured beneath rubble.

There were also attacks in Luhansk, Kharkiv, Odesa and Zaporizhzhia, making the huge nuclear plant there dangerously unstable.

In the southern port of Mykolaiv, another missile strike targeted oil storage tanks.

It is believed about 28 drones were used. One had the words “for Belgorod” – a shelled Russian city near the Ukraine border – scrawled on it.

Belgorod was also the scene of a military training camp attack by two recruits that killed least 11.

Moments later, there were explosions from unmanned Russian drones in the city’s Shevchenkiv district.

Kyiv’s mayor, former heavyweight boxing champion Vitaliy Klitschko, visited one scene, as a woman’s body was dragged from the rubble.

He said: “Everything that is happening [here] is terrorism.”

“We need more air defence systems and as soon as possible. We have no time for slow actions.”

A 45-year-old woman was killed in Kharkiv. In Luhansk, governor Serhai Haidai said: “The Russians are wiping the liberated settlements off the face of the earth with tanks, artillery and anti-aircraft fire.”

He added that the “occupiers are placing concrete cubes and digging trenches throughout Luhansk region – preparing for a long defence” in the region annexed by Russia, but not under full Kremlin control. Zaporizhzhia official Anatoly Kurtev said there was an additional attack on the city overnight, but no injuries or casualties had been reported.

It was later confirmed the city’s huge nuclear plant – the biggest in Europe – had again been left unstable and without power because of the Russian shelling.

Ukrainian armed forces said they shot down nearly 40 drones around the country. In the south, around the ports of Odesa and Mykolaiv, 26 drones were intercepted and 11 taken out of action in northern and central Ukraine, which includes Kyiv.

Russian president Putin’s use of unmanned drones is an increasingly favoured tactic.

Usually launched in pairs, the 441lb kamikazes have an official claimed range of about 1,242 miles – but in truth, it is believed to be closer to several hundred miles. Ukrainian defence specialist Oleg Katkov said they were relatively low-tech and guided by a civilian GPS system.

He said: “Since this equipment is assembled from low-quality parts, the reliability will be low.That is why the tactics involve their use in a so-called swarm.

“Five to six, or even more kamikaze drones are launched at one target, assuming that a few of them will fulfil their task.”