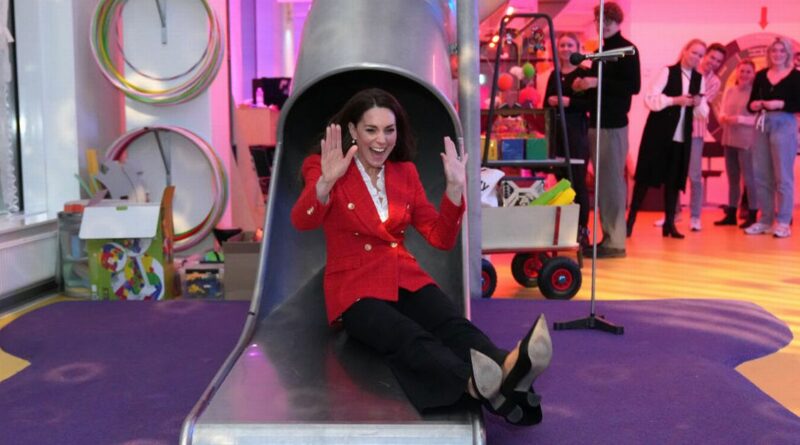 The Duchess of Cambridge appeared more relaxed and confident on her recent solo trip to Denmark without husband Prince William, a royal expert has said.

Kate Middleton had travelled alone to the Danish capital Copenhagen for a two-day visit where she is said to have learned about the country's approach to early years development.

She also attended a women's crisis centre with Crown Princess Mary and had an audience with Denmark's Queen Margrethe while on her one-woman trip to Denmark.

One of the many highlights from the trip showed Kate sliding down a large slide when she visited the Lego Foundation PlayLab, The Mirror reported.

Royal expert and biographer Robert Jobson has said that Kate "really came out of herself" on the trip.

He said: "Kate seemed more relaxed without William, who can be a bit fussy when he's on royal jobs.

"The fact that she went down that slide, I'm not sure she necessarily would have done that if he was there. She was on good form, all smiles, very confident. Probably more confident than when she's alongside William.

"She spoke very well. I thought she really came out of herself when she was there… She didn't have to refer to William."

Speaking to The Royal Beast, Jobson continued: "When you see them together, she's always double-checking whether it is the right thing to do, even now.

Despite this solo visit to Denmark for Kate, she and husband Will were on royal duties to Wales where they marked St. David's Day.

They took part in their first walkabout since the coronavirus pandemic to learn about the local produce on offer in Abergavenny.

The Prince was spotted noted the freezing temperatures and was heard making a rare and personal comment about wife Kate.

A fan who shook hands with the Duchess of Cambridge said: "She has the coldest hands ever."

William followed that up with: "But they say 'cold hands, warm heart'."