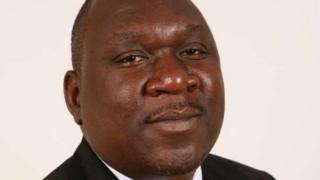 Popular Kenyan comedian Charles Bukeko, known to many as Papa Shirandula, has been buried after dying from breathing complications on Saturday.

His self-deprecating humour made Papa Shirandula one of the country’s best known TV characters.

The 58-year-old actor played the role of a stereotypical security guard living the daily hassle and bustle familiar to a majority of Kenyans.

His celebrity status won him deals with Coca-Cola and other big brands.

Papa, as many affectionately called him, died on Saturday after breathing complications while waiting for treatment at a top private hospital in the capital, Nairobi, his widow Beatrice Andega, told mourners on Monday.

“When he went to hospital, he requested for three tests of malaria, pneumonia and Covid-19 but the hospital concentrated only on Covid and ignored the rest,” Ms Andega was quoted as saying by the local Daily Nation news site.

The hospital has not responded to requests from the BBC for comment.

His burial was done under strict health regulations imposed to curb the spread of coronavirus. It is unclear if he had contracted the virus.

Papa made actors proud of their trade

Most office buildings in Kenya have security guards at the main entrance – their job: to check and vet who goes in and comes out. It is the lives of these Kenyans, often underpaid and looked down upon, that Papa managed to play so well.

In character he was unsatisfied with his job and had big aspirations – he fooled his family that he was an office worker while he was actually a lowly-paid security guard. He was a gossip, an irritant to workmates but always endearing and funny. His life was so relatable to many Kenyans, earning him a loyal following.

On the streets, if you asked for Charles Bukeko, you would mostly draw blank faces. But speak of Papa Shirandula, and faces would light up instantly.

Not only did he represent the new-age cult personalities of TV comedy – who took over from the iconic characters of long-running shows like Vitimbi and Vioja Mahakamani, he helped transform acting from a pauper’s job in Kenya to a lucrative career.

Nearly all the cast members of Papa Shirandula have since become familiar faces, gracing advertisements, hosting radio shows and making millions in the process. Acting is now a career to be proud of in Kenya, and Papa can take some credit for that.

Many Kenyans have mourned Papa as a man with a big heart, saying that his passing had been a big hit to the country.

President Uhuru Kenyatta called him “a gifted storyteller… who would be cherished forever”.

A rights group in tweeted that he had united Kenyans through laughter:

Charles Bukeko's acting spread laughter even in times of political and economic uncertainties; he united us through laughter. We celebrate his legacy and contributions to Kenya’s art and entertainment industry. Rest well Papa Shirandula! pic.twitter.com/FF3eXpPGvY