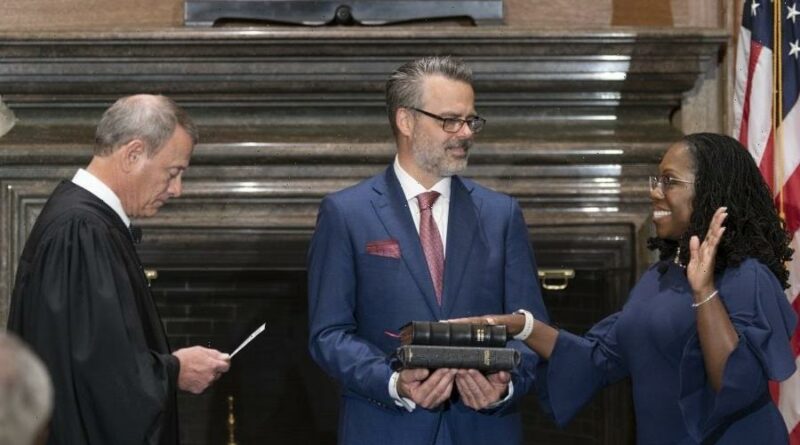 Ketanji Brown Jackson was sworn as the 116th Supreme Court justice and the first Black woman to serve on the high court on Thursday afternoon. Jackson, 51, replaced Justice Stephen Breyer, who she clerked for during the Supreme Court’s 1999-2000 term. Breyer’s retirement was effective at noon.

This is the first time in history where white men are not the majority on the Supreme Court. Jackson joins three other women justices—Sonia Sotomayor, Elena Kagan and Amy Coney Barrett. It’s the first time four women will serve together on the nine-member court.

Jackson’s appointment came after a campaign promise by then-candidate Joe Biden. When Justice Stephen Breyer, 83 announced his retirement in January 2022, the opportunity for Biden to follow through with the promise, finally presented itself. After a contentious confirmation process, the Senate confirmed Jackson’s nomination in early April, by a 53-47 mostly party-line vote that included support from three Republicans.

As she was sworn in by Roberts and Breyer, Jackson’s husband, Dr. Patrick Jackson, held the two stack bibles. One was a family bible, the other one was donated to the Supreme Court by Justice John Marshall Harlan.

During his 34-year tenure on the court, Harlan, known as the “Great Dissenter.” Justice Harlan was the only justice to vote no in 1896 in Plessy v. Ferguson, which upheld the constitutionality of racial segregation under the “separate but equal” doctrine.

“With a full heart, I accept the solemn responsibility of supporting and defending the Constitution of the United States and administering justice without fear or favor, so help me God,” Jackson said in a written statement. “I am truly grateful to be part of the promise of our great Nation.”

Jackson is the first justice, in 55 years, since Thurgood Marshall—the first Black justice appointed—to be appointed with experience as a criminal defense lawyer.

According to AP News, all the justices except for Neil Gorsuch attended the swearing-in. There was no immediate explanation for Gorsuch’s absence.