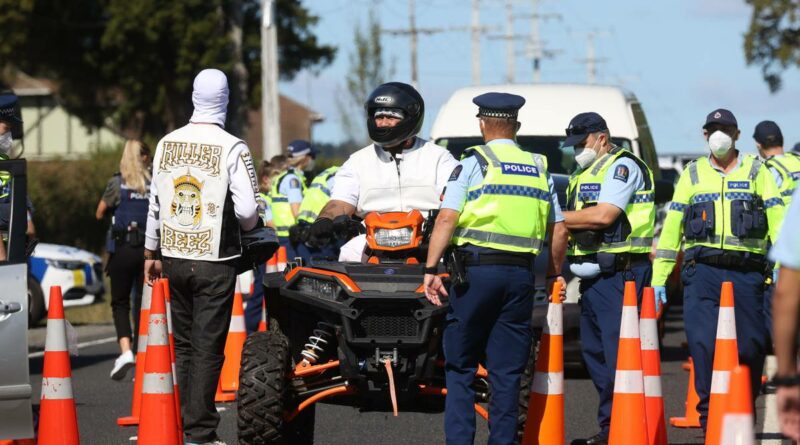 A 150-strong party capped off a day of drama yesterday after Killer Beez gang members descended on the tiny community of Ramarama.

A crash involving Killer Beez gang members earlier that afternoon had caused chaos on Auckland’s Southern Motorway with footage of an injured man lying on the ground and damaged bikes being wheeled off the road.

On Saturday the gang held its annual general meeting which saw 300 bikies gather at Ramarama, south of Auckland. As part of the that meeting, gang members went on a drive through Auckland.

The accident occurred shortly after the Killer Beez bikies went through a police road block in Ramarama, travelling north.

A witness, who didn’t want to be named, said they saw the commotion on the motorway about 1pm on Saturday, near the East Tamaki exit.

In footage of the northbound lanes of SH1 directly taken after the crash, one rider appears to be laying on the road hurt as another comes to his assistance.

Further down the road others can be seen picking up at least two downed bikes and wheeling them to the shoulder of the road.

The witness said one man had a badly damaged helmet.

“His helmet was peeling off his face, like with hanging plastic pieces.”

Later in the day after the crash, the gang returned to the Country Inn Motel at Ramarama.

The manager of the motel, who called himself “Q” Hapuku, today said the gang members set up a marquee for dinner and a had a few bands. The event catered for 150 people, he said.

There were no issues with members of the gang and Q Hapuku said they were well-behaved and respectful of the property, he said.

“They are packing up and ready to go,” Hapuku said this afternoon.

About half the 30 rooms at the motel were booked by the gang.

The police today said they were not aware of anything of note.

Yesterday, police checkpoints were set up close to the Country Inn where bikers and vehicles carrying gang members were pulled over.

Gang members started arriving for their annual AGM on Thursday and police told locals the gang was likely be in the area until Monday.

The gang’s founder and president Josh Masters was among those stopped, riding a quad bike. Masters was left paralysed from the waist down after a shooting several years ago.

He waved to the Herald photographer as he drove past.

Other gang members were not so kind, taunting cops as they cruised past yelling, “F*** the police.”

Locals said the bikers were doing burnouts at 3am on Saturday – and they were sick of the gang members’ intimidation tactics.

“They did the same last year and we expect the noise level and burnouts will continue tonight,” one said.

“If they kept to themselves, we wouldn’t mind but they have to let everyone in the area know they are here with their partying and carry on.

“The gangs are out of control, but we are thankful that police have been quick to stop any of their nonsense.”

Officers told locals they were checking all individuals coming in and going out of the venue.

“Police are gathering all their intel on the Killer Beez,” another local told the Herald.

A police spokesperson said yesterday officers had issued a number of notices for breaches of licence conditions and vehicle safety requirements.