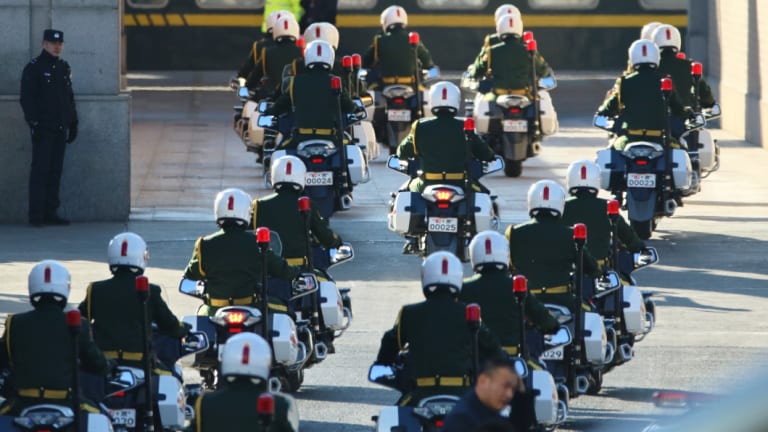 Kim arrived on his birthday, and a week after giving a New Year's Day speech calling for multilateral talks between the signatories to the Korean War truce in order to push forward a peace treaty to formally end the war.

The signatories include China and the United States.

On Tuesday, Chinese state media ran front-page stories heralding South Korea and North Korea's progress – a passenger train travelled from Seoul to North Korea on December 26, the first since the Korean War in 1953.

Kim and South Korean President Moon Jae-in had pledged to sign a peace treaty by the end of 2018, but negotiations between North Korea and the United States have since faltered.

South Korean media have reported that Vietnam could be the venue for a second summit between Kim and US president Donald Trump, as multiple meetings have recently been held between US and North Korean officials in Hanoi.

Trump said on Sunday a location for the summit would be announced "in the not too distant future", but sanctions would stay in place until North Korea made more progress.

Kim made his first secretive visit as leader to Beijing in March – also his first visit abroad, after antagonising the United States and north Asian neighbours with long-range missile and nuclear tests. 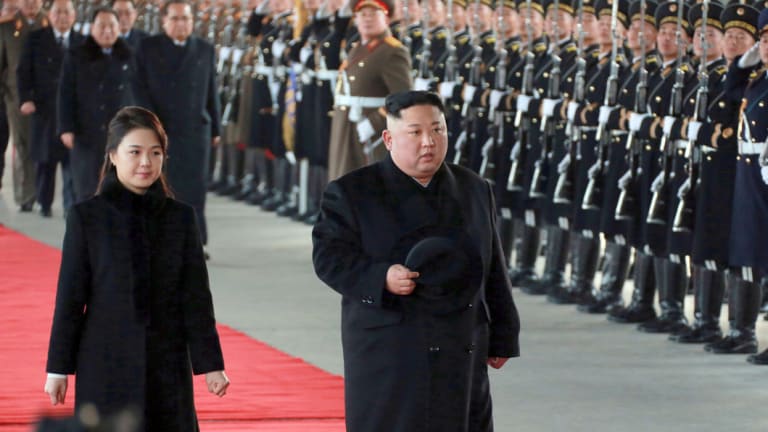 Kim Jong-un walks with his wife, Ri Sol-ju at Pyongyang station before leaving for China.Credit:AP

Strict United Nations Security Council sanctions were imposed a year ago, which appear to have been the catalyst in Kim's shift in focus from his missile program to rebuilding the North Korean economy.

A historic summit in Singapore with Trump brought loose agreement that North Korea would take steps to denuclearise the Korean Peninsula and the US would pause large military drills.

But disagreements continued over the definition of denuclearisation and Kim complained in his New Year's speech that the US hadn't taken reciprocal measures, particularly sanctions relief.

Kim has met Xi ahead of each significant meeting with the US and South Korea, and this week's four-day visit is his fourth to China.

South Korean news agency Yonhap reported that Kim, accompanied by his wife Ri Sol-ju, would stay at the state guest house Diaoyutai and meet with Xi in the Great Hall of the People on Tuesday afternoon. He is expected to visit Beijing's technology precinct, Zhongguancun, on Wednesday.

Meanwhile, Canadian Prime Minister Justin Trudeau spoke with Trump on Monday and thanked him for the US's strong statements of support in response to the "arbitrary detention of two Canadians in China".

The two men, Michael Kovrig and Michael Spavor, had been conducting research or consultancy work on North Korea when they were detained in China. They have been accused of national security violations. Their detentions coincide with the arrest in Canada of Huawei chief financial officer Meng Wanzhou.

Kim's arrival coincides with trade talks being held in Beijing between the US and China. Chinese Vice-Premier Liu He made a surprise appearance on Monday to greet the US delegation of mid-level officials, a sign of China's willingness to avert a full-blown trade war.

US Commerce Secretary Wilbur Ross said on Monday on US television that “there’s a very good chance that we’ll get a reasonable settlement that China can live with, that we can live with and that addresses all the key issues”.