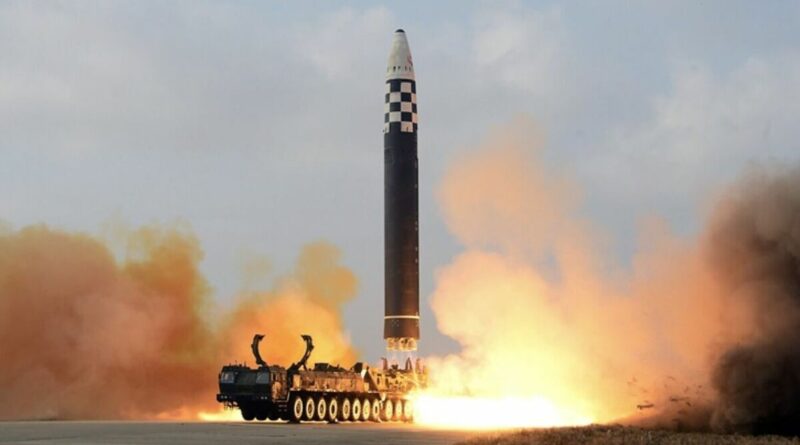 Kim Jong Un has vowed to answer “nukes for nukes” in the strongest hint yet that the North Korean leader intends to test and eventually develop nuclear weapons. In a statement translated by the state-run Voice of Korea broadcasting service the DPRK(Democratic People’s Republic of Korea) called for a”frontal confrontation” against its enemies.

The military “threat” of the United States and its “followers”, such as South Korea, were also blasted in the statement.

They said: “A new-type intercontinental ballistic missile of the Strategic Force of the Democratic People’s Republic of Korea was test-fired on November 18 when the strategy of the Workers’ Party of Korea and the DPRK government on giving top priority to the defence upbuilding is strictly enforced to constantly enhance the super-powerful and absolute nuclear deterrent.

“The test-firing was carried out under the intolerable situation in which the reckless military confrontation of the United States and other hostile forces tenaciously driving the military and political situation of the Korean peninsula to the dangerous line surpasses the limitation and the hypocritical and gangster-like sophistries abusing even the right to self-defence of a sovereign state as provocation are justified even on the stage of the United Nations.

“The respected Comrade Kim Jong Un, General Secretary of the Workers’ Party of Korea and President of the State Affairs of the DPRK, guided the test-firing of the new-type intercontinental ballistic missile on the spot.

“Under the present situation it is necessary to show a clearer action to the United States and its followers including south Korea that the military counteraction against us precisely means self-ruin and a wise option has to be reconsidered to improve the environment for their security.

“We must clearly show the toughest will of our Party and government for retaliation to the enemy who are hell-bent on the aggressive war exercises to disturb peace and stability of the Korean peninsula and the region.

“The more often the US imperialists make a military bluff in and around the Korean peninsula while concentrating efforts on “strengthening the offer of the extended deterrence” to their Allies and staging war exercises, the more offensively our military counteraction will be changed.

The ICBM was launched at 10.15am local time from the Sunan area of the North Korean capital Pyongyang.

According to the South Korean Joint Chiefs of Staff (JCS), the missile flew about 1,000kilometres (621miles) east.

The US described the launch as a “brazen” violation of UN resolutions.

Japan added that the missile launched had the ability to reach the US mainland.

This is around 210kilometers (130miles) west of the Japanese island of Oshima Oshima, according to the Japanese Coast Guard.

It did not fly over Japan itself the Japanese Government vowed to continue to collect and analyse information and provide prompt updates to the public.