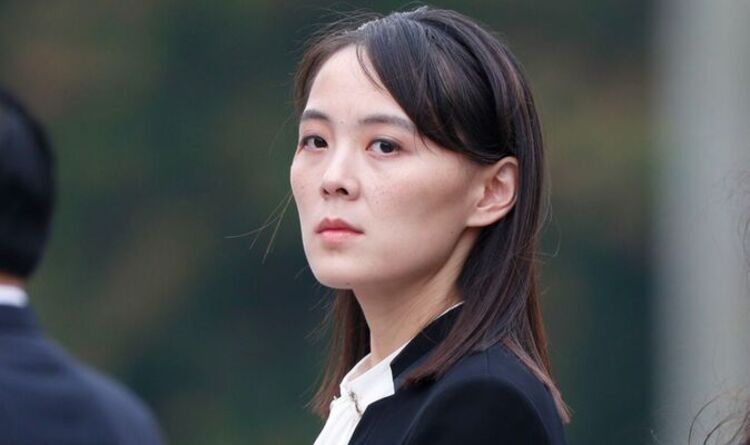 Following a recent propaganda video of a missile launch produced with Hollywood style effects, music and editing, Seoul responded to the Top-Gun themed video with a warning to the North. Defence Minister Suh Wook stated his country had the ability to launch precision strikes against Pyongyang if the North was thought to be preparing for an attack.

Fuming at the remarks, the icy Ms Yo Jong slammed Mr Wook saying: “The senseless and scum-like guy dare mention a ‘pre-emptive strike’ at a nuclear weapons state.”

“South Korea may face a serious threat owing to the reckless remarks made by its defence minister.”

“South Korea should discipline itself if it wants to stave off disaster.”

The tension between the North and South has increased in recent weeks following Pyongyang’s testing of intercontinental ballistic missiles, (ICBM’s).

The launching of the missiles comes for the first time in four years and has been met with severe condemnation by global powers.

Ties between the two nations were hoped to have improved under the more liberal South Korean President Moon Jae-in who wanted to push for closer bonds between Seoul and Pyongyang.

With the test being carried out, this has been seen by some as an embarrassment to Mr Moon.

Ms Yo Jong, who is now considered by many to be second in command within North Korea was not the only official to send words of warning to the South.

Pak Jong Chon, a secretary in the Workers’ Party’s central committee, separately warned: “any slight misjudgement and ill statement rattling the other party under the present situation” may trigger “a dangerous conflict and a full-blown war.”

Ties between North Korea, South Korea and the US took a positive turn in the past when Ms Yo Jong paid a visit to the south for the opening ceremony of the Winter Olympics.

Whilst at the White House, President Donald Trump met Mr Kim on two occasions, crossing the iconic borderline in the DMZ into North Korea in a symbolic gesture.

However, ties broke down over concessions demanded by Pyongyang in return for easing back on their nuclear capabilities.

Speaking of the current situation, one academic warning more could come in terms of threats.

“Similar to how Moscow and Beijing try to gaslight the world Russia’s invasion of Ukraine is somehow the fault of NATO, Pyongyang will blame its nuclear and missile advancements on the US-South Korea alliance.”

Speaking to Politico, he said Pyongyang is sensitive to Seoul’s pre-emptive attack capability because it lacks military assets and the capability to detect South Korean strikes in advance.

Could North Korea spark a war with the South? Can diplomacy be revived between North and South Korea? Will South Korea’s new President launch a pre-emptive strike on North Korea? Let us know what you think by CLICKING HERE and joining the debate in our comments section below – Every Voice Matters!

Mr Yoon has openly discussed the notion of pre-emptive strikes on North Korea, a stance seen by some as provocative.

The United States has attempted to reconcile with North Korea, asking it to return to the negotiating table with no preconditions.

Experts say the move by Mr Kim to launch ICBM’s again will be used as a bargaining tool should talks resume.

The same analysts believe North Korea could launch further such rockets in the coming weeks, with the aim of testing heavy payloads such as a satellite, which would model conditions emulating a nuclear warhead.