Washington: Days after a historic summit with North Korean leader Kim Jong-un, the Trump administration is forging ahead with new engagements with another longtime adversary: Russia.

US President Donald Trump is expected to meet with Russian President Vladimir Putin next month while he is in Europe for a NATO summit, according to a senior administration official and two diplomats familiar with his schedule.

In a nod to those plans, Trump told reporters on Friday that "it's possible" he would meet with Putin this northern summer. 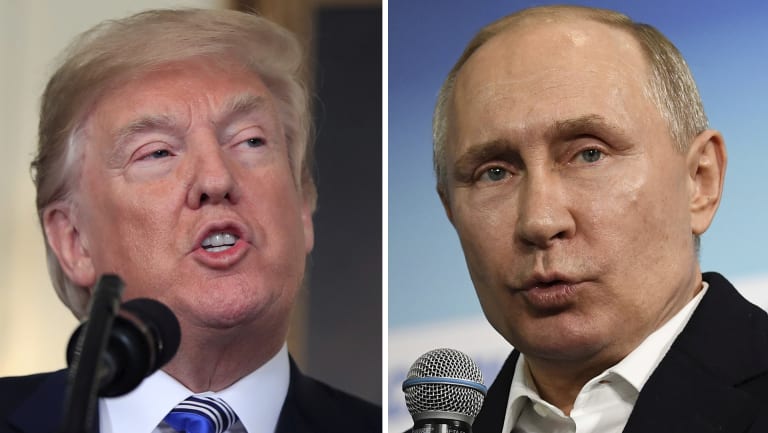 Meanwhile, US Ambassador to Russia Jon Huntsman is arranging for a delegation of Republican senators to visit Moscow, ending a long dry spell of congressional trips to the country following the Kremlin's interference in the 2016 presidential election.

The push for engagement with the Kremlin follows months of prodding by Trump, who has faced resistance from senior political aides and diplomats questioning the value of meeting with Putin and worry that the tête-à-tête could cast a shadow over the NATO summit in Brussels.

"From Trump's point of view, he's had one successful meeting with Kim Jong-un, and now he wants to do the same with Putin," said Angela Stent, a Russia expert who worked in the George W. Bush administration. "His advisers have been sceptical from the beginning."

The president's interest in a meeting with Putin became public in March after the Kremlin disclosed that Trump extended an invitation in a phone call with the Russian leader. But US officials say Trump privately has been asking his aides for a bilateral meeting ever since he met with Putin in Vietnam in November on the sidelines of a multilateral economic summit. 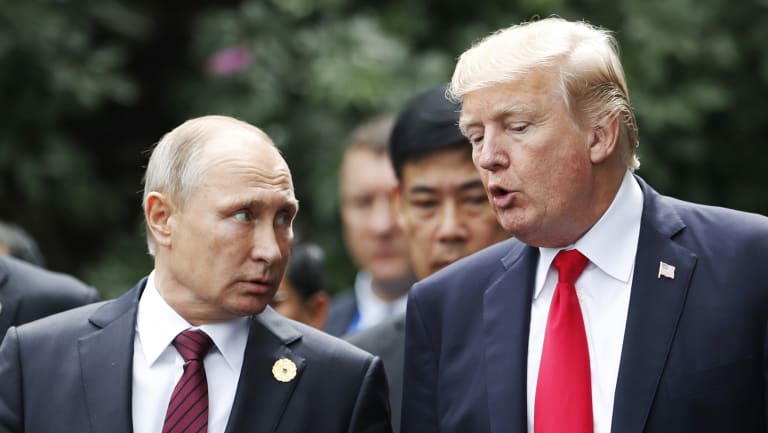 US President Donald Trump and Russia’s President Vladimir Putin talk during the family photo session at the APEC Summit in Danang, Vietnam.

"After that meeting, the president said he wanted to invite Putin to the White House," one US official said. "We ignored it."

At the time, top aides in the National Security Council opposed the idea of a meeting and said they didn't view Trump's interest in a summit as an order to set one up. "They decided: Let's wait and see if he raises it again," said the official, who like others spoke on the condition of anonymity to discuss a sensitive issue.

Putin and Trump have met previously on the sidelines of international gatherings, but a one-on-one summit would be the first of its kind since the US-Russia relationship plunged to historic lows after Moscow's military intervention in Ukraine.

Trump's insistence on a summit stems from his view that together, the two men can resolve major geopolitical issues in the Middle East and Europe.

When asked about a potential meeting, Putin's spokesman Dmitry Peskov said "we don't exclude" the possibility but that no specifics have been discussed, the Associated Press reported.

On Thursday, a senior White House official in charge of Europe, Richard Hooker, told the Russian news agency Tass that the White House was exploring the idea of a meeting in Austria, which boasts close ties with Washington and Moscow.

Trump's success in advancing the summit planning marks a victory over his aides, who have pushed him to embrace a number of hawkish policies toward Russia that he has later regretted. In April, the Trump administration imposed sweeping sanctions against Russian oligarchs, sending shock waves through the Russian economy.

In March, Trump ordered the largest US expulsion of Russian officials in history, although he later accused his aides of misleading him about the size of the purge. Last year, he approved the transfer of anti-tank missiles to Ukraine, but scolded his aides after the policy decision became public.

Now, Trump has become a strong public advocate for engagement with Russia.

On Friday, he repeated his view that Russia should be reinstated in the group of industrial economies formerly known as the Group of Eight.

Russia was expelled from the group after it annexed Crimea in 2014, a military intervention Trump blamed on President Barack Obama.

Most US allies view the land grab as a clear breach of international law that was solely the responsibility of Putin.

Senior officials at the State Department have acknowledged that a meeting between the two leaders could, in theory, help resolve long-standing differences on Ukraine, Syria, cybersecurity issues and interference in foreign elections.

But some of those officials have said a summit between the two leaders is premature given the lack of progress on resolving minor issues, such as the return of Russian dachas on the East Coast, which were seized as punishment for Moscow's interference in the election.

"There's no doubt that both sides would be very interested in seeing this summit materialise, but it's not going to materialise out of thin air," said a senior State Department official. "Personally, I would be very reluctant to put my president into a meeting where he has to talk about dachas, or he has to talk about staffing patterns at embassies. . . . There is a lot of work that has to be done ahead of a meeting like this."

John Herbst, a Russia expert at the Atlantic Council, said the internal tension over the summit follows a pattern of clashes between Trump and his aides on Russia.

"He has chosen advisers who are all hawkish on Russia," he said. "Meanwhile, he's trying to pursue a policy with Russia that is disadvantageous in the current political environment. This has played out consistently since he took power."

Stent said a meeting between Putin and Trump could be beneficial, but noted that it would probably create discomfort at the NATO gathering. "At least there will be more contact. It's dangerous having so few contacts given the proximity of fighting in Syria."

Still, she doubted the opportunities for real progress.

"The two men will come out of a meeting saying we agreed to cooperate on Syria and counterterrorism and Ukraine," she said. "That doesn't mean those things will happen, but that's what they'll agree to do."

Huntsman, the US ambassador, is among the few Trump officials who have actively supported engagement with Russia. He has been organising a trip to the country by Republican senators, including, Richard Shelby of Alabama, John Neely Kennedy of Louisiana and John Hoeven of North Dakota.

Huntsman "wants some senators to come over to understand what's going on," Hoeven told The Washington Post. "We're still working on the details."

A State Department official declined to discuss the rationale for the trip but said Huntsman "has consistently supported more dialogue, not less, with Russian officials."

The State Department declined to say if any Democrats were invited to join the latest trip.

Kennedy, who confirmed his interest in the trip, said the visit could help lawmakers understand how the United States can "have a better relationship with Russia."

"Try to figure out what Russia is thinking . . . what their attitude is [and] to what extent Mr. Putin really speaks for the average Russian," he said.