‘One of the nicest men I have ever met’: Kind plane passenger comforts a stranger’s scared four-month-old son, colors with her three-year-old and escorts them to connecting flight

Boarding a plane with a baby for the first time can be a daunting experience for any parent, let alone getting on alone with two kids under three.

Arkansas mother Jessica Rudeen said she was panicking when she boarded her flight to Charlotte earlier this month, but the unexpected kindness of a stranger made the trip pleasant for everyone on board.

Ms Rudeen said her hungry four-month-old son was screaming as they walked on board, and her three-year-old daughter Caroline – who had earlier been very excited to travel – had suddenly developed a fear of flying.

As she struggled to contain her children in their seats, a man sitting nearby, named Todd, leaned over to help, and turned what could have been an ordeal into a dream. 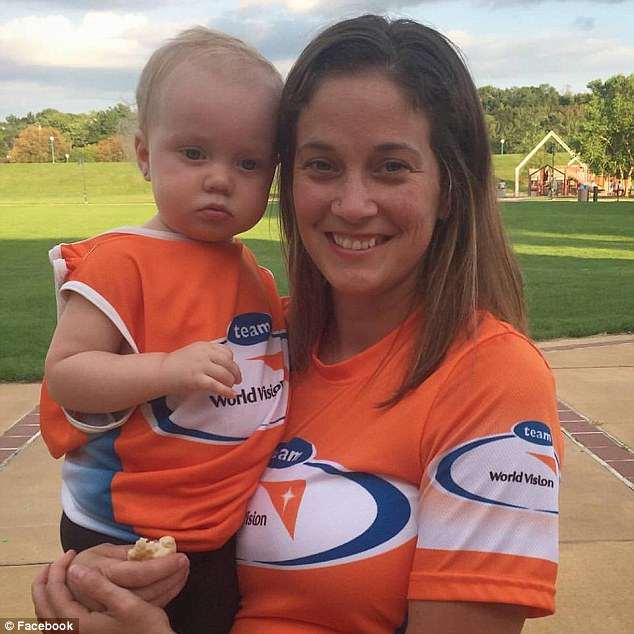 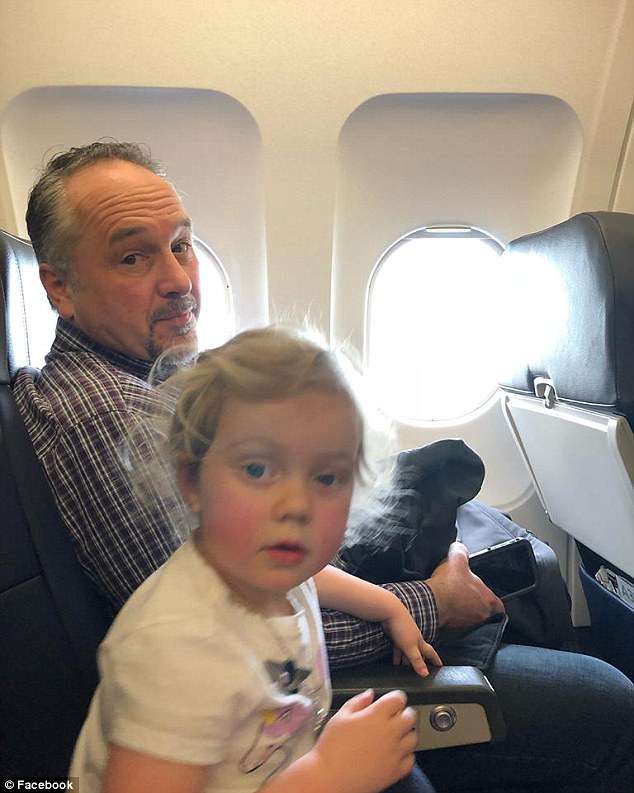 A man known only as Todd (pictured) was seated in Ms Rudeen’s row when she boarded the plane with two screaming children. He quickly got to work helping to settle them, turning Ms Rudeen’s trip from an ordeal to a dream

‘This man reached for the baby and held him while I forced a seat belt on Caroline, got her tablet and started her movie,’ Ms Rudeen wrote in a moving Facebook post.

‘Once she was settled and relatively calmed, he distracted her so that I could feed Alexander.

‘Finally, while we were taxiing, the back of the plane no longer had screams.

‘During the flight, he colored and watched a movie with Caroline, he engaged in conversation and showed her all the things outside.

‘By the end of the flight, he was Caroline’s best friend. I’m not sure if he caught the kiss she landed on his shoulder while they were looking out the window.’ 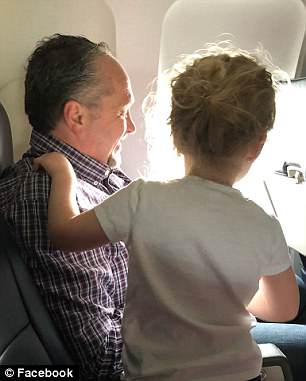 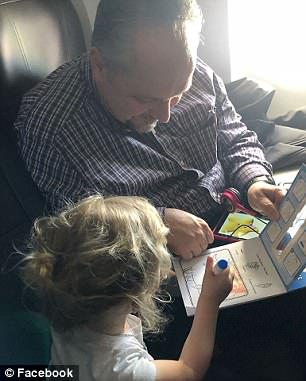 During the flight, Todd coloured with three-year-old Caroline, and the pair looked at things out the window 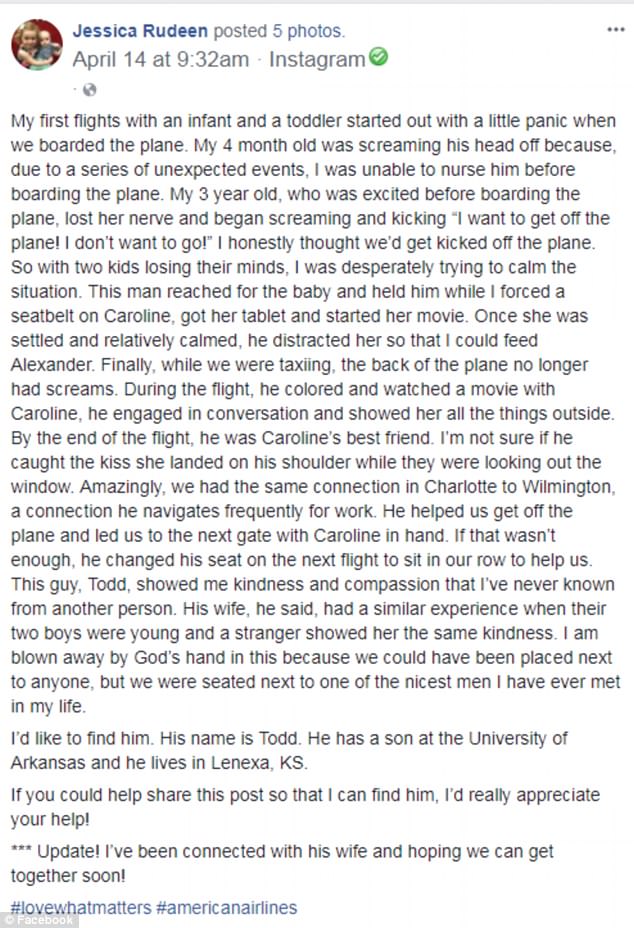 So overwhelmed by ‘one of the nicest men I have ever met in my life’, Ms Rudeen shared Todd’s kind actions for the world to see

The young family thought they would lose Todd as they headed towards their connecting flight to Wilmington, but the Good Samaritan was headed the same way.

‘He helped us get off the plane and led us to the next gate with Caroline in hand. If that wasn’t enough, he changed his seat on the next flight to sit in our row to help us,’ Ms Rudeen wrote.

The mother-of-two said she saw a kindness and compassion from the total stranger she had never experienced in her life.

Todd told her he was so eager to help because his own wife was helped by someone when she first flew with their children.

‘We could have been placed next to anyone, but we were seated next to one of the nicest men I have ever met in my life.’ 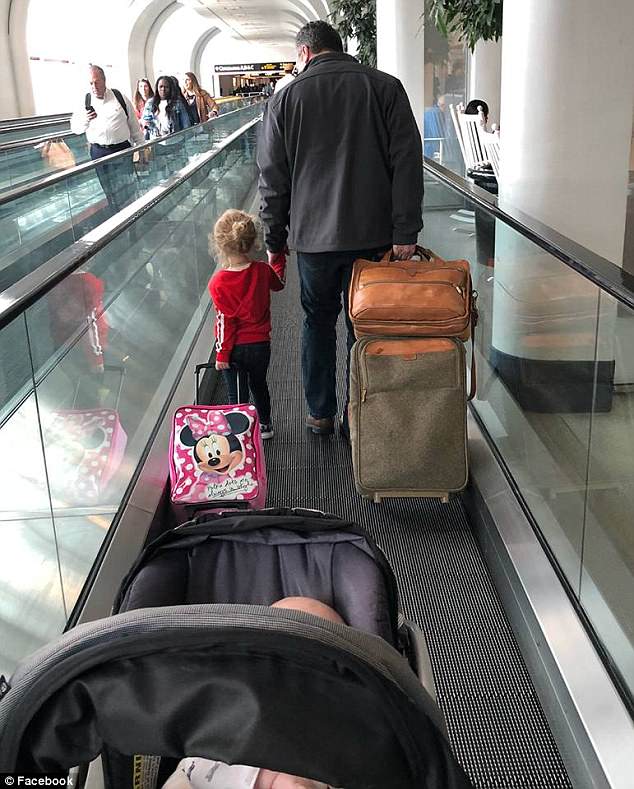 When the family got off the plane, they thought they would lose their new friend, but Todd had the same connecting flight – and happily helped young Caroline to the gate while Ms Rudeen pushed her four-month-old son in his pram 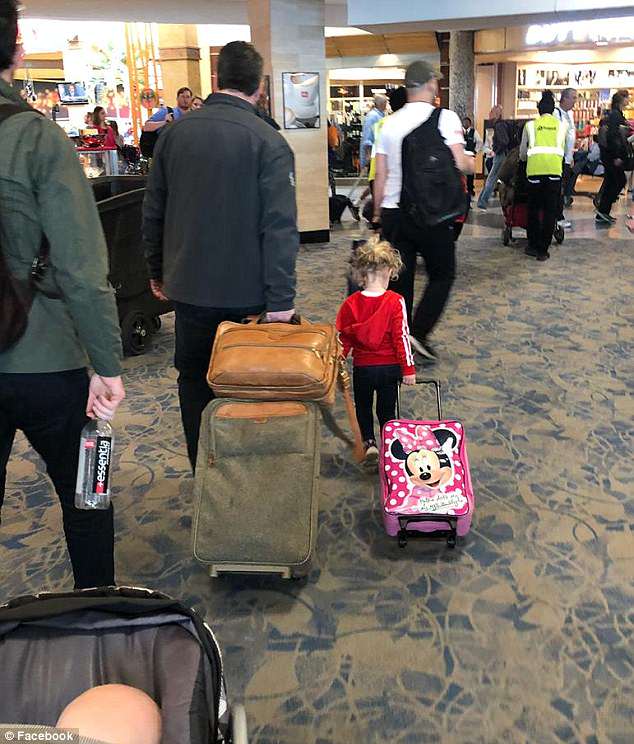 Despite not exchanging phone numbers, Ms Rudeen’s post reached Todd’s wife, and the pair are planning to meet up again