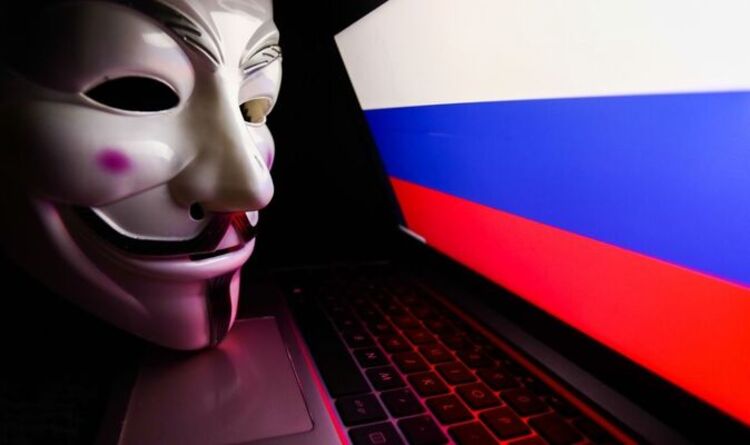 The group vowed at the beginning of the conflict in Ukraine to target Russia, infiltrate their software and dismantle the Russian war effort in support of Ukraine. The vigilante hacker group posted a video with a voice distorter and a person with their usual Guy Fawkes mask on February 27 saying: “Greetings citizens. This is a message to Vladimir Putin from Anonymous.

“Mr Putin. The ongoing invasion of Ukraine has shown that your regime has no respect for human rights or the self-determination of your neighbours…this is an ugly situation all round, but you are the instigator.”

The video continued: “Members of Anonymous have declared cyber war against your aggressive regime…soon you will feel the wrath of the world’s hackers, many of whom will likely reside from your home country.

“Your secrets may no longer be safe and there is a chance that key components of your government’s infrastructure could be hijacked.”

According to reports, the cyber attack infiltrated institutions connected to the Kremlin and other Russian companies.

The data dump has leaked 776 GB of files from the Kremlin, including hundreds of thousands of emails from the Russian Ministry of Culture that oversees archives, art, and censorship.

The oil and gas company Aerogas, a state-backed company, also had their data and emails hijacked.

“This data includes more than 200,000 emails from the Ministry of Culture of the Russian Federation.”

The findings of the leak have been published by Anonymous on DDoSecrets, which is a new platform for whistleblowing with the motto: “Know the truth, though the heavens may fall and the world burn.”

The website has issued a warning to readers about accessing the dataset that needs to be treated with “additional care”.

DDoSecrets said: “This dataset was released in the build up to, in the midst of, or in the aftermath of a cyberwar or hybrid.

“Therefore, there is an increased chance of malware, ulterior motives and altered or implanted data, or false flags/fake personas.”

This is not the first cyber-attack that has successfully been carried out by the group on Russia, as they managed to leak the data of Russian troops and took over state-controlled television.

The group has vowed that “the hacking will continue until Russia stops their aggression”.