Labour’s Brexit strategy descended into chaos and confusion yesterday after the party’s leadership faced a backlash for ruling out a Norway-style deal with the EU.

In an attempt to clarify its position on Tuesday night, shadow Brexit secretary Sir Keir Starmer published plans to maintain ‘full access’ to the single market – without actually being in it.

Labour sources claimed it meant that the party was seeking the ‘softest possible Brexit’. But at the same time, Sir Keir enraged Labour Remainers by confirming that the party would not support a Lords amendment designed to take Britain into the European Economic Area.

EEA membership, enjoyed by Norway, gives full access to the single market, but comes at a heavy price, including accepting free movement, contributing to the EU budget and accepting Brussels rules while having no say in them. 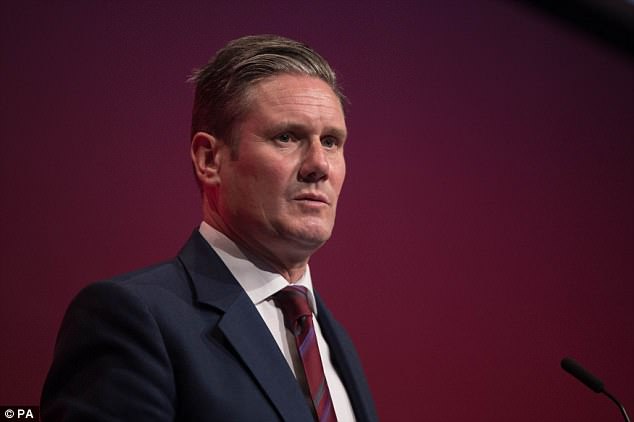 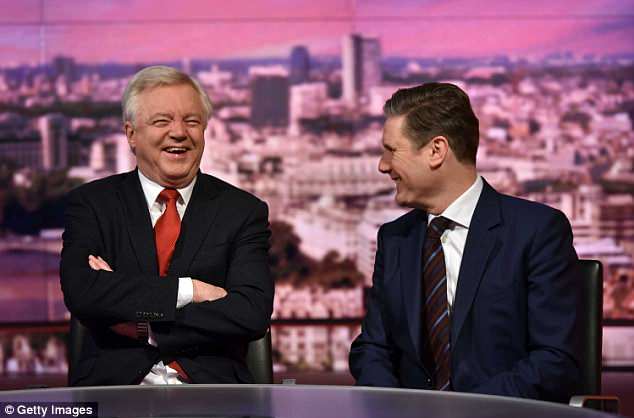 Sir Keir, pictured in conversation with Brexit Secretary David Davis, has proposed what is being called ‘the softest possible Brexit’

It means the party’s position is likely to anger both Remainers and Brexiteers.

Yesterday, when asked why Labour had decided not to back the amendment on the EEA, Sir Keir acknowledged the party was hopelessly split.

‘The difficulty with that, and I think everybody recognises this, is that there are very strong and very different views across the Parliamentary Labour Party on that particular amendment,’ he told BBC Radio 4’s Today programme. ‘So, whilst there’s unity on all the other amendments and we will all be voting together, on that amendment there are very divided views.’

The stance infuriated Labour Remainers yesterday and also dismayed pro-Brussels MPs on the Tory benches, who have now tabled their own amendment to put Britain in the EEA.

Ex-shadow chancellor Chris Leslie said: ‘We should not be in the business of bailing out Theresa May when she’s facing rebellion on the single market.’ Former leadership contender Owen Smith said there was ‘no chance’ of Labour’s proposals being accepted by Brussels and called on Jeremy Corbyn to back a second referendum. And Chuka Umunna, another former frontbencher, said he and dozens of Labour MPs would defy Mr Corbyn and vote for the EEA when the Withdrawal Bill returns to the Commons next Tuesday.

He urged Mr Corbyn to think again, saying: ‘Whether the UK continues to participate in the single market through the EEA is now in the hands of the Labour frontbench.

‘This is a very unusual position but it is by dint of the fact this is a hung Parliament, tight parliamentary arithmetic and we live in quite extraordinary times.’

Diehard Tory Remainers signalled they would join forces with Labour over the issue when they tabled a separate amendment to the Trade Bill designed to keep Britain in the EEA.