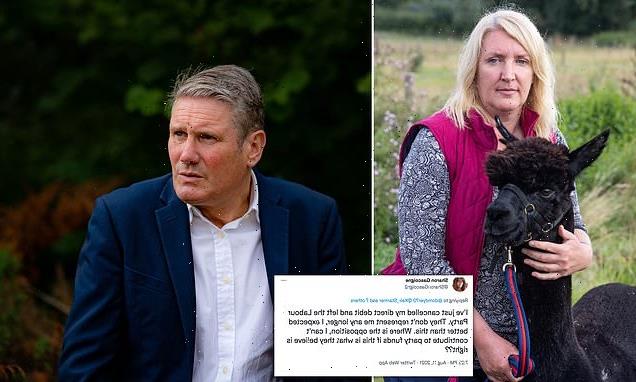 Voters are cancelling their Labour Party memberships after Sir Keir Starmer said Geronimo the embattled alpaca must be slaughtered.

The leader of the opposition said last night that there was ‘no alternative’ but to kill the eight-year-old male after it tested positive for bovine tuberculosis, despite pleas from campaigners.

The animal, originally from New Zealand, is currently in isolation on owner Helen Macdonald’s farm in south Gloucestershire.

‘It’s a really sad situation and you can see why emotions are running really high,’ Sir Keir said.

‘It’s always tragic when it happens. I don’t think we can make an exception in this case. Of course it’s sad – it’s sad for farmers as well when they lose their animals but we have to keep TB under control.’ 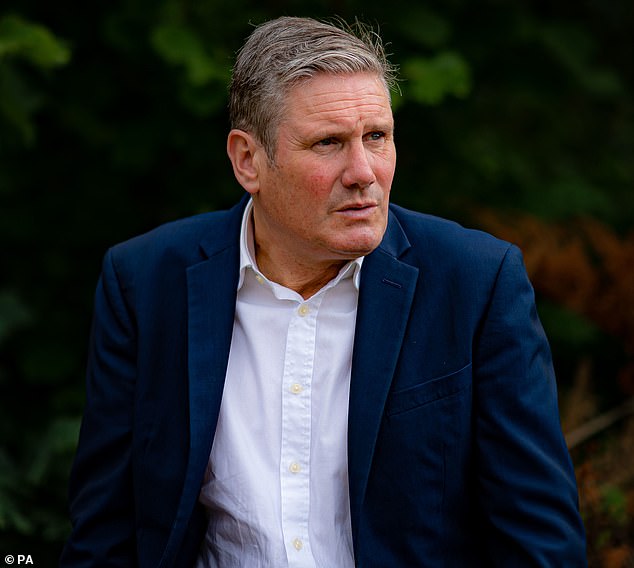 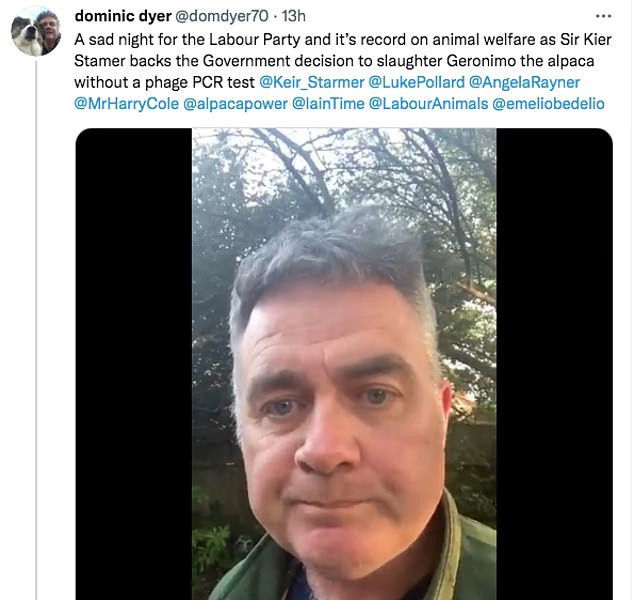 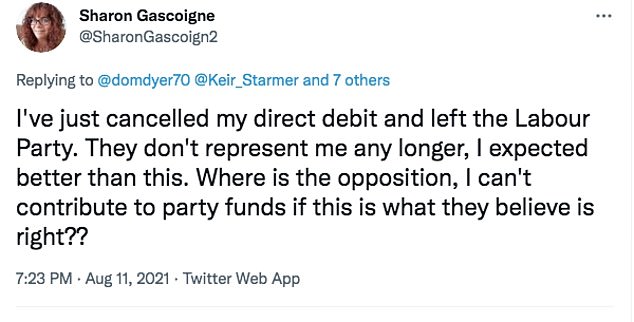 Geronimo supporters hoping for backing from the Labour Party were left sorely disappointed by the comments – with several saying they had cancelled their membership Thursday.

‘I’ve just cancelled my direct debit and left the Labour Party,’ one wrote on Twitter.

‘They don’t represent me any longer, I expected better than this. Where is the opposition, I can’t contribute to party funds if this is what they believe is right.’

Another wrote in reply: ‘Me too…sick of Starmer’, while one simply said: ‘So ashamed of my party.’

‘Labour claim to love animals but they do this,’ another chimed in, ‘we now need a new political party.’

‘Totally ineffective opposition,’ blasted another, ‘I’m appalled at the position of the Labour party on this critical issue. We cannot rely on labour to make ethical decisions.’

The animal’s owner Helen Macdonald, 50, insists the TB results were false positives and is demanding a re-test from the Department for the Environment, Food and Rural Affairs (Defra) – something the Government, including the prime minister himself, has repeatedly denied.

Animal Welfare campaigner Dominic Dyer said Sir Keir’s decision to back Boris Johnson over Geronimo represented a ‘sad night’ for the Labour party and a ‘missed opportunity’ to raise concerns with the Government about the overall TB policy.

On Sir Keir’s comments he said: ‘That in my view is an absolutely disgraceful decision, I think it will annoy a huge number of Labour supporters.

‘It fatally undermines Labour’s commitment to animal welfare, it puts it in a position where it is no better than the Government, and I am really really angry and disappointed.

He told his more than 31,000 followers that he also found it ‘incredible’ that shadow environment secretary Luke Pollard and Angela Rayner who ‘considers herself an animal welfare campaigner’ had said ‘absolutely nothing’.

The fury on Twitter continued, with one voter branding Sir Keir ‘disgraceful’, while another added: ‘He’s gone right down in my estimation.’

Another said: ‘Corbyn would never have done that. That is despicable. I’ve seriously been considering my membership for some time – think this may be the end of the road.’

‘Utterly disgusting,’ wrote one, ‘Yet another nail in the coffin of any real opposition to the circus in power.’

One voter vowed: ‘Don’t think I will vote Labour again, what a bunch of hypocrites.’

‘I have supported Keir throughout, but there is no excuse for this,’ warned another, ‘If Labour are not going to be a party for animal welfare then I really will have to reconsider my support.’

Under a High Court warrant Defra has 30 days to slaughter Geronimo.

The body has repeatedly refused to retest Geronimo for bTB arguing its test is accurate despite the Daily Mail’s bombshell evidence of nine other camelids who were slaughtered following false positives for bTB.

Miss MacDonald said: ‘We are just asking to have him tested with something appropriate.

‘I get they have policy to follow but there are other ways, and they don’t have to kill him.’

The warrant was issued to kill Geronimo following a £50,000 High Court battle.

Ms Macdonald this week received backing from the Prime Minister’s father Stanley Johnson, who reiterated his support for Geronimo, but revealed that he had not phoned his son over the issue because he doesn’t wish to ‘invoke some privileged access mechanism’ to advance his opinion.

Ms Macdonald has also had support from protesters who demonstrated outside the Defra headquarters in London and Downing Street on Monday, while a petition to save Geronimo has now brought in more than 115,000 signatures.

Geronimo had been given the vaccine tuberculin which, Ms Macdonald says, produced a false positive.

The petition claims: ‘DEFRA had prior knowledge that giving multiple injections of tuberculin before the Camelid Enferplex blood test (known as priming) produces false-positive test results in healthy camelids. This happened to Geronimo in 2017 and DEFRA failed to declare this.’

Ms Macdonald told Good Morning Britain earlier this week: ‘We’ve known that there’s been problems with this test since 2016 but Defra didn’t tell me that before the first test result in August 2017.

‘The second round of testing by their own admission was biased, they actually said ”we deviated from protocol to ensure that the client understood that the first test was indeed positive for tuberculosis, so you know, I was discriminated against from the very get-go.

‘And then a few months after that we found out that they already knew that there was a problem with this test, so there is no validity to their claims, there is a new test called Actiphage which looks for the embobis in the blood stream.

‘What we’ve always been asking for is testing that’s appropriate for an alpaca, and let’s have a better answer because clearly he produced an antibody response to the tuberculin four years ago or he wouldn’t be standing here today.’