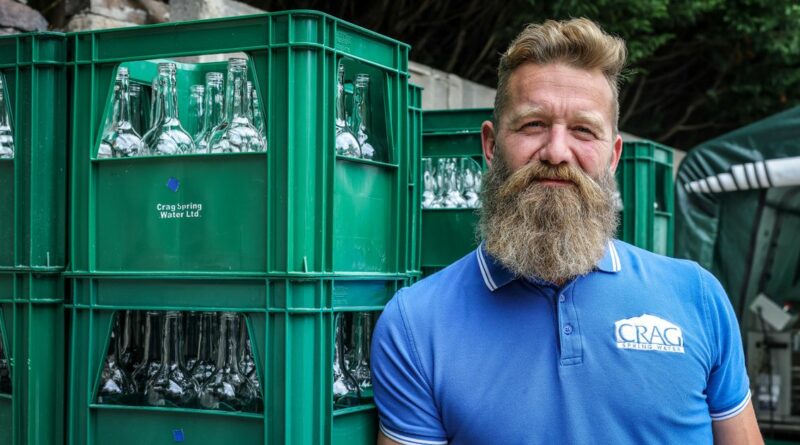 A pub landlord who took on a boozer and expected a huge bill to sort out its water supply found instead that he had tapped into a pure spring that is now making him a fortune.

Doran Binder, 49, bought the bought the Crag Inn in Wildboarclough, Cheshire in 2016, while recovering from a divorce that he says left him at "rock bottom".

Not long after taking on the cosy country pub, he was required to get the water tested as part of an annual inspection to make sure it was safe for the public to drink.

Despite fearing he was going to end up having to stump up to get it up to standards,

Doran soon learned that there was an aquifer running 27 metres below the pub — and it flowed with what has been called some of the purest water in the world.

What's more, there's 700,000 litres of it, which is enough to fill in excess of a million bottles a day.

After word about his discovery got out online, he was contacted by a boutique US drinks manufacturer that sells high-end mineral water to elite clients for up to $150 a bottle.

Doran said: "They got in touch with me on Instagram and asked me for samples. I thought, ‘Okay, this where I get rumbled.’ These people are global experts, they sell the finest waters in the world. I reluctantly sent it to them, put it on a credit card because I had no money and it was about eighty-five quid, and then a week later they asked for a Skype meeting.

"The first thing they said was, 'This is one of the finest waters we’ve ever tasted’. They didn’t think I was doing it justice by putting it in reusable glass bottles, they thought the water was better than that and they thought it was a bit of a marketing gimmick. I explained that it wasn’t a marketing gimmick, it’s about environmental awareness and that’s the direction I want it to go in, so I held off supplying them.

"They said, 'If we were to sell your water in our boutique today, the 750ml bottle we'd be selling for between $35 and $50 a bottle'. They have bottles there that they sell for $150 a bottle, and that's when I realised it wasn't too good to be true."

But the 49-year-old Cheshire man sensationally turned them down, opting instead to run his own glass bottling operation straight from the pub. He regularly receives calls from India, China, the US and further afield from companies looking to import his water.

The dad-of-five said he was working for Bumble and Bumble, a hair care products brand in New York, and living between the US and the UK when family circumstances prompted him to buy the pub.

"We were living 900 metres away on a farm, and we got divorced. I thought if I bought the pub I could be close to the kids. I knew the pub was failing, but I thought I'd just buy it and see what happened."

A concrete block around two feet high lies between the pub's beer garden and a small barbecue, covering a borehole that descends 27 metres down to the aquifer.

After the discovery, Doran set about turning the pub into a bottle processing plant. He uses only glass bottles, which are washed and refilled when they are returned.

His company, Crag Spring Water, now employs 12 people who operate out of the pub's old dining room. Bottles are delivered by crate straight to the doors of customers in the company van and through milk floats. The still waters sell at £12 for 12 750ml bottles, the sparkling at £15 for the same amount.

Doran is proud of the company's environmental credentials, and is passionate about using glass and not plastic:

"It's re-using. Don't say recycling. People say, 'Oh, you recycle bottles …' No, we don't. We re-use them. We think about recycling as a green thing, but we take a bottle, put it in a recycling bin, it gets transported somewhere, it gets crushed, and then gets turned back into what it was."