Leave.EU chief faces police probe as Brexit group is fined £70,000 for smashing spending limits in referendum – but watchdog says it did NOT use Cambridge Analytica

Leave.EU was today hit with a £70,000 fine for breaking rules on spending during the referendum battle.

The Brexit group, co-founded by former Ukip backer Arron Banks, overspent by at least £77,380 – 10 per cent over the limit.

The Electoral Commission has also referred chief executive Liz Bilney to the police.

But it found no evidence that controversial tech firm Cambridge Analytica had made donations or provided paid-for services, and its role was limited to ‘initial scoping work’. Leave.EU, co-founded by former Ukip backer Arron Banks, overspent by at least £77,380 – 10 per cent over the limit. Mr Banks is pictured second from right at the launch of the group in November 2015 Mr Banks insisted the outcome proved there was no ‘big conspiracy’ and raised the prospect of a legal bid to overturn the findings.

Bob Posner, the Electoral Commission’s director of political finance and regulation, and legal counsel, said: ‘The rules we enforce were put in place by Parliament to ensure transparency and public confidence in our democratic processes.

‘It is therefore disappointing that Leave.EU, a key player in the EU referendum, was unable to abide by these rules.

‘The level of fine we have imposed has been constrained by the cap on the Commission’s fines.’

He said: ‘We view the Electoral Commission announcement as a politically motivated attack on Brexit and the 17.4m people who defied the establishment to vote for an independent Britain.’

He added: ‘(The commission) went big game fishing and found a few ‘aged’ dead sardines on the beach. So much for the big conspiracy!

‘What a shambles, we will see them in court.’

The £70,000 fine is the maximum the watchdog can impose. It handed out the same level of punishment to the Tories in March last year for offences during the 2015 general election campaign and 2016 by-elections.

A separate probe into spending by the official Leave campaign, Vote Leave, is still under way.

The commission found the overspend by Leave-EU ‘may well have been considerably higher’, adding that the group had presented ‘incomplete and inaccurate’ information about spending.

The commission said its investigation also found that three payments from Mr Banks, totalling £6 million, had been incorrectly reported by Leave.EU.

It was also criticised for failing to report services from US strategy firm Goddard Gunster when it should have done.

The organisation also failed to provide invoices or receipts for a further 97 payments it received of more than £200, which together totalled £80,224.

The commission report said: ‘Through its investigation, the Commission also has reasonable grounds to suspect that the responsible person for Leave.EU committed criminal offences and she has therefore been referred to the Metropolitan Police.’ 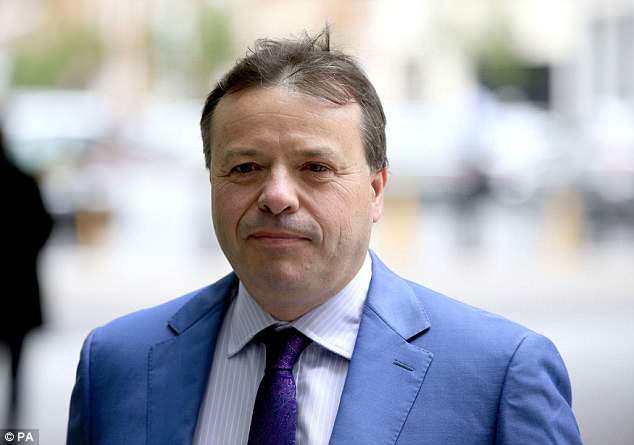