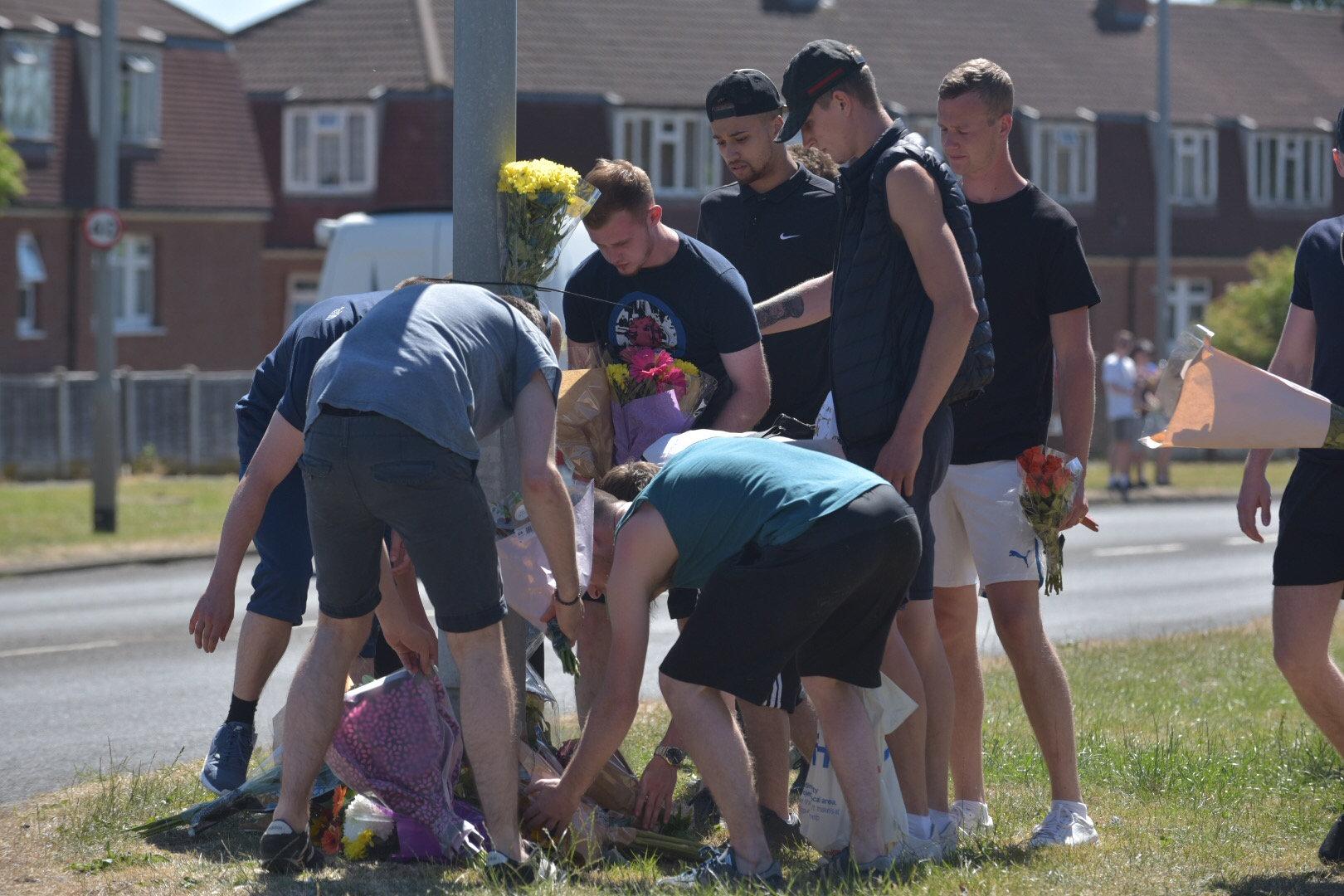 They were pronounced dead at the scene in Horsforth, Leeds — while the driver and another two teen girls were rushed to hospital with serious injuries.

Groups of mourners arrived at the site of the 2.40am crash this afternoon as cops removed cordons and re-opened the road to traffic.

Tearful pals hugged each other and cried as two women taped flowers to a lamppost next to where the tragedy happened.

Chara Andrews, 19, told how he had grown up with all four of them and felt "absolutely empty". 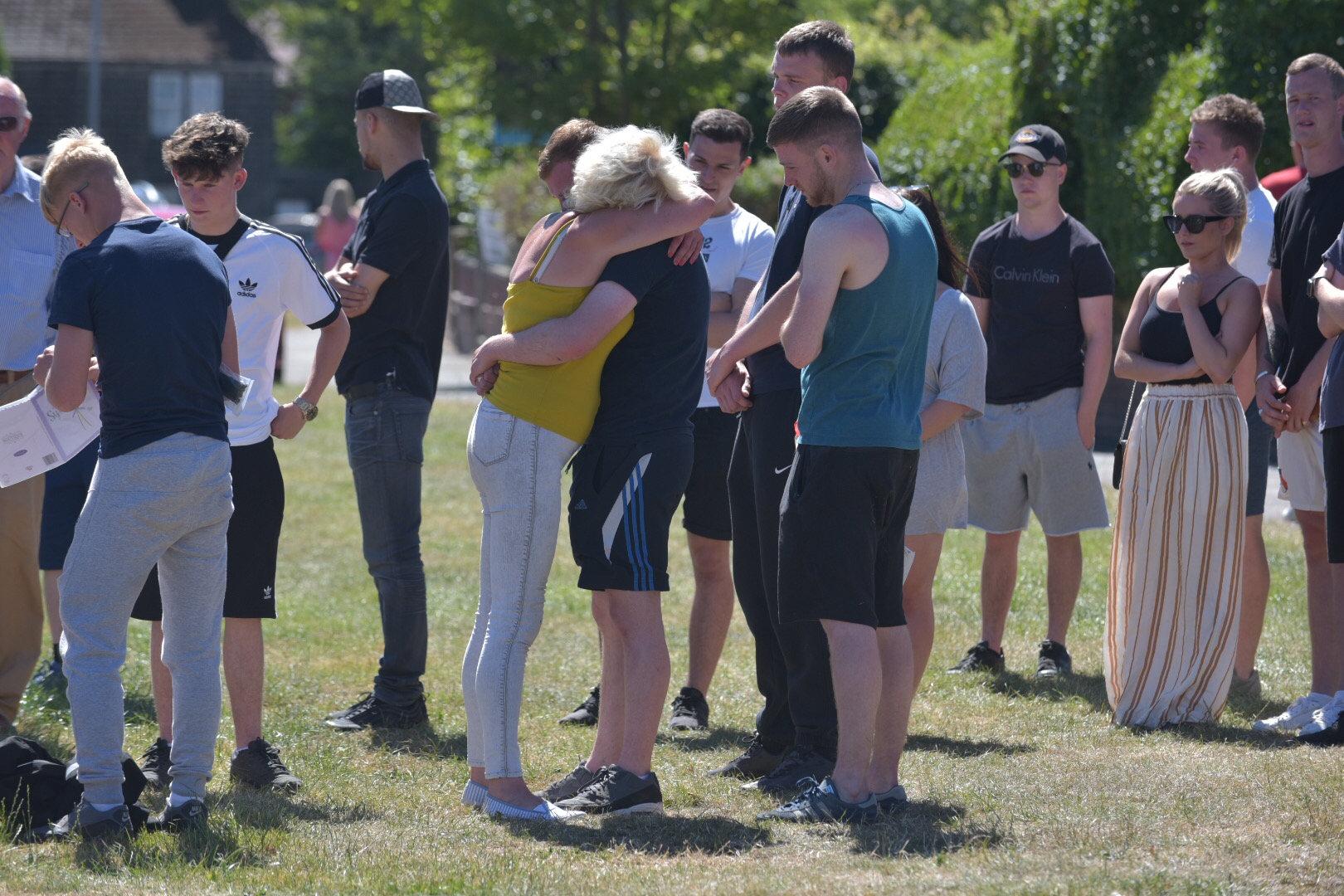 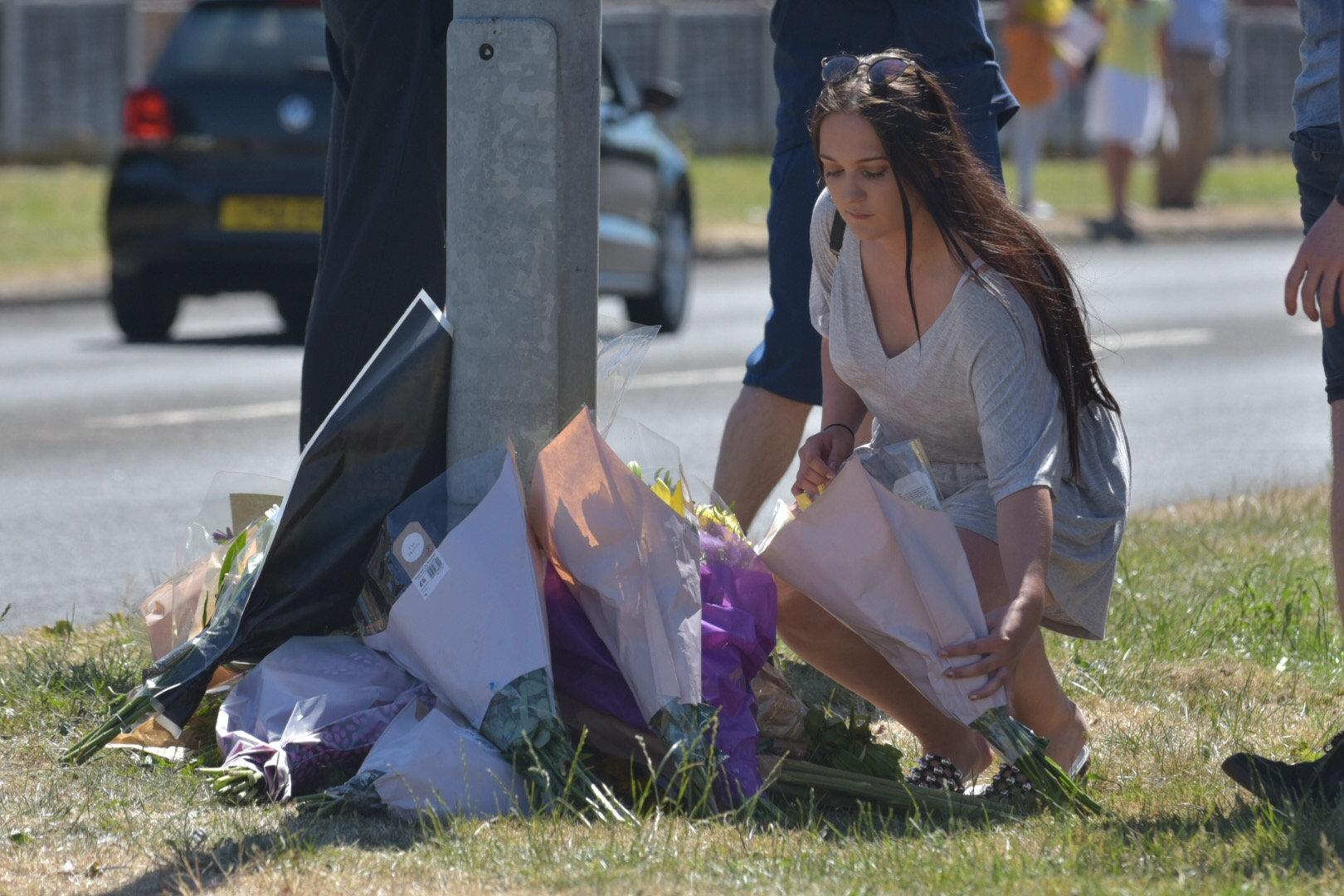 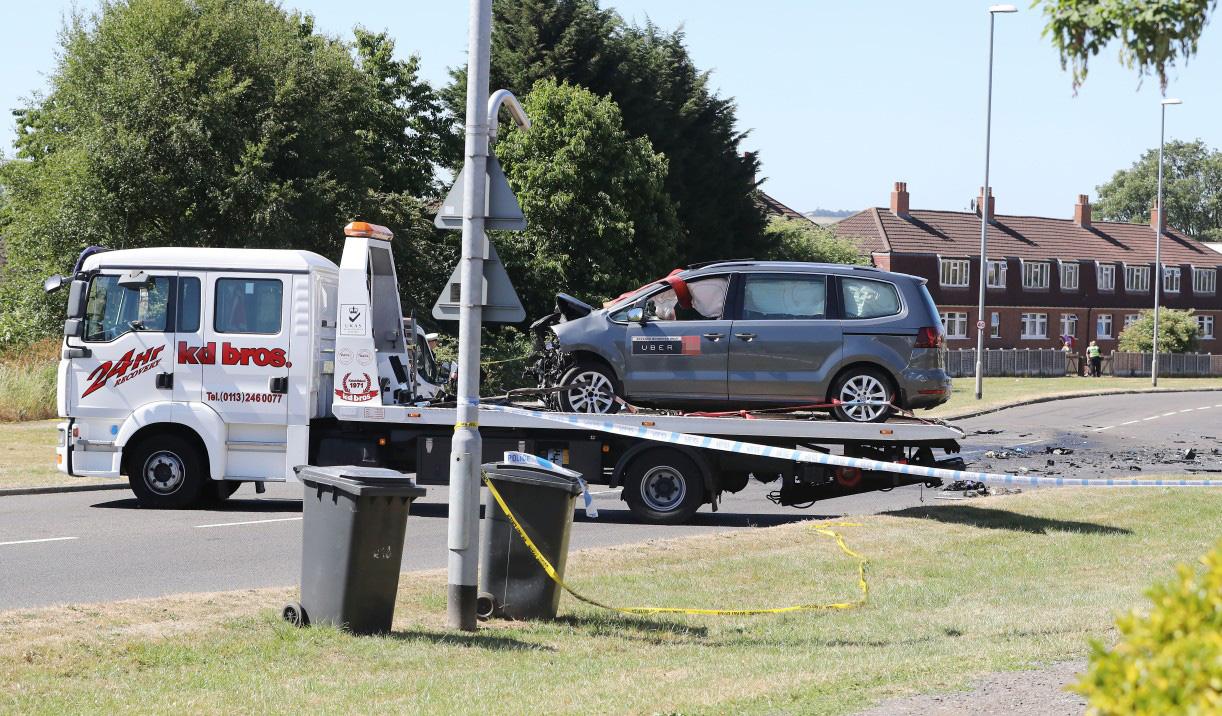 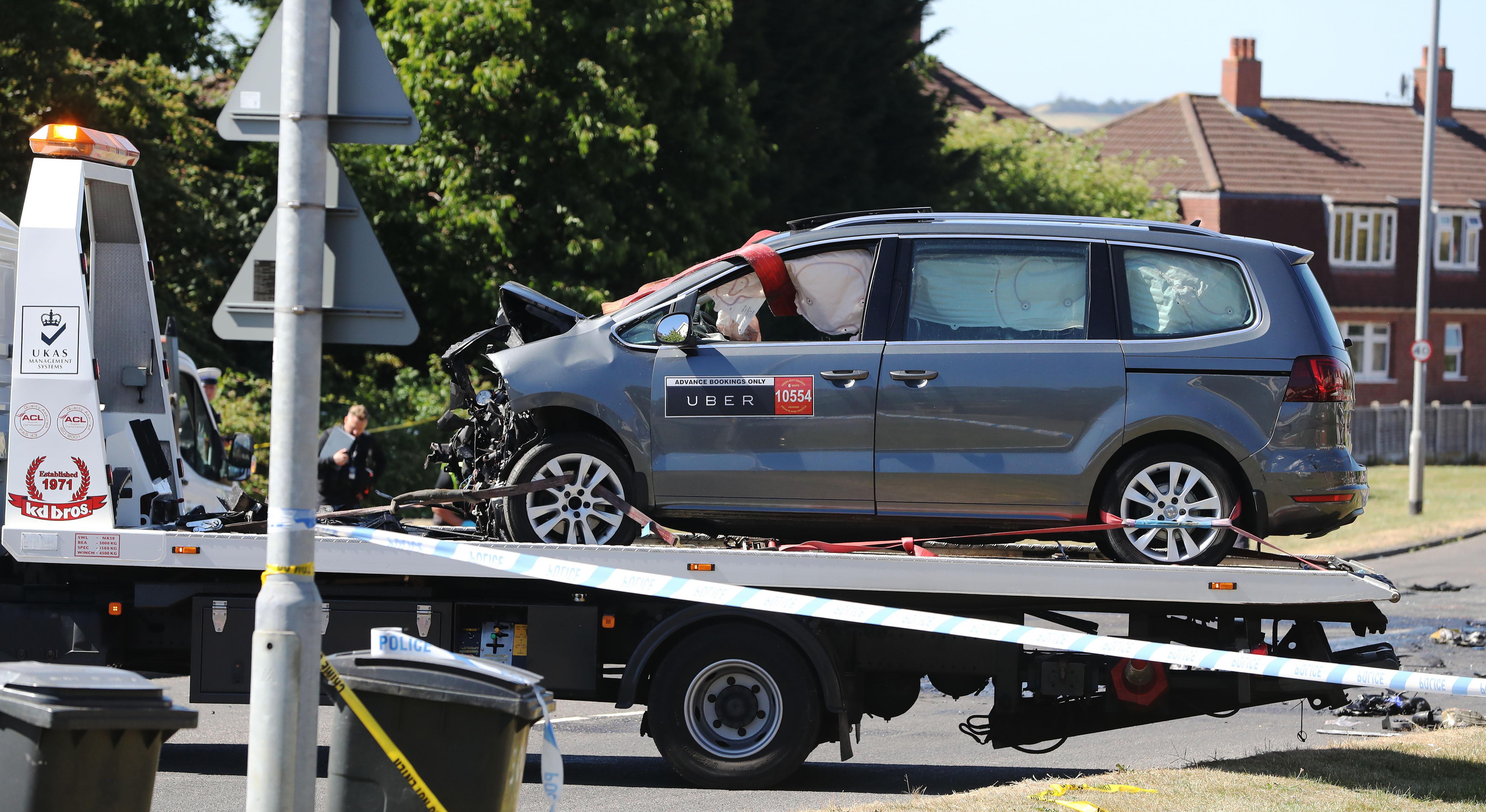 He said: "When I found out this morning I didn't want to believe it.

"They were the best set of lads you could ever meet.

"We've had some of the best times and I feel happy now remembering it.

"I know they all together and looking down on us at the moment.

One grieving mother's tribute read: "To my beautiful son You were so loved and adored. Rest in peace Always in my heart and mind forever I love you so much Mum."

Another heartbreaking note read: "You’re always in our hearts forever, words cannot describe the love I have for you little bro, keep smiling up there kid. RIP Love you always." 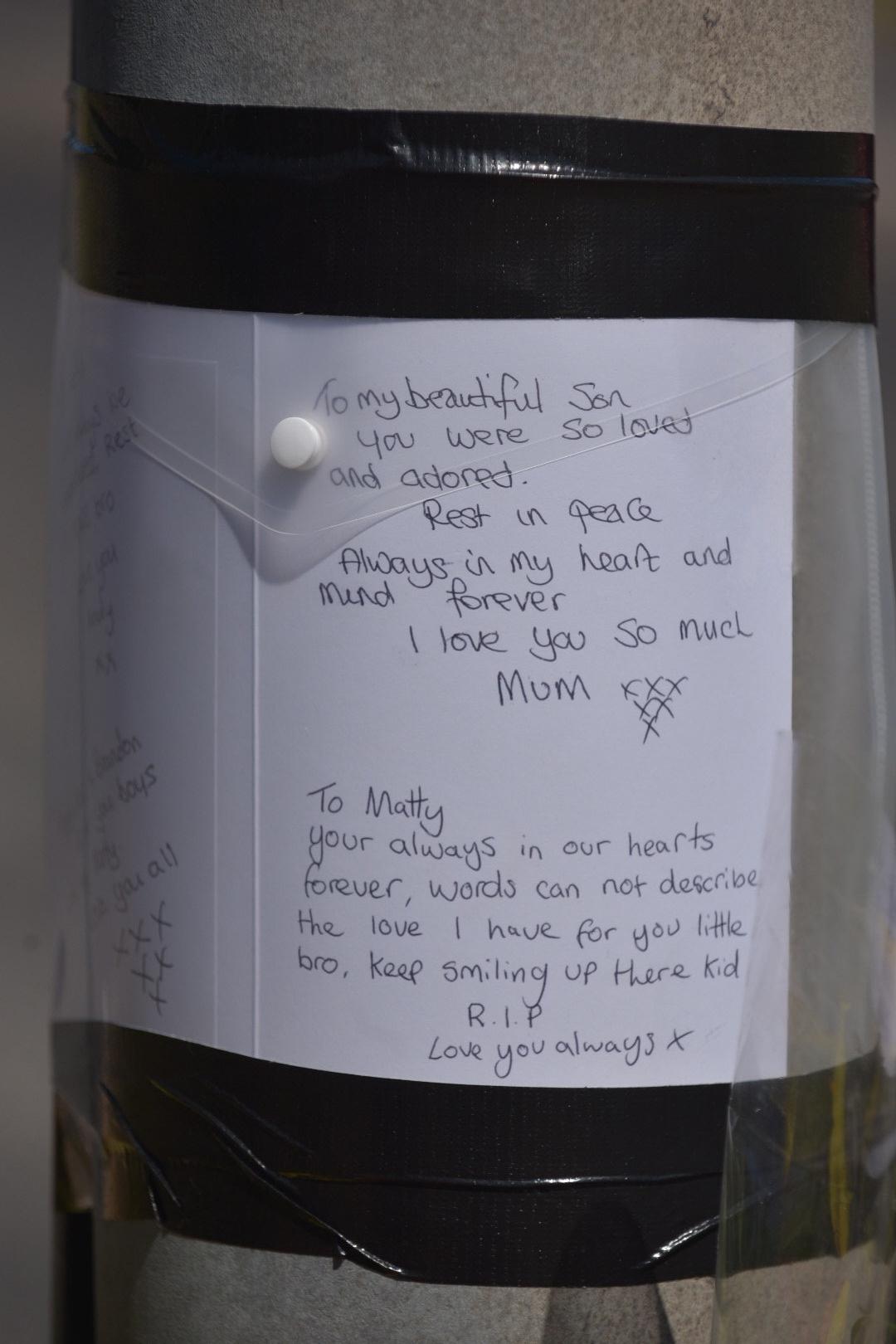 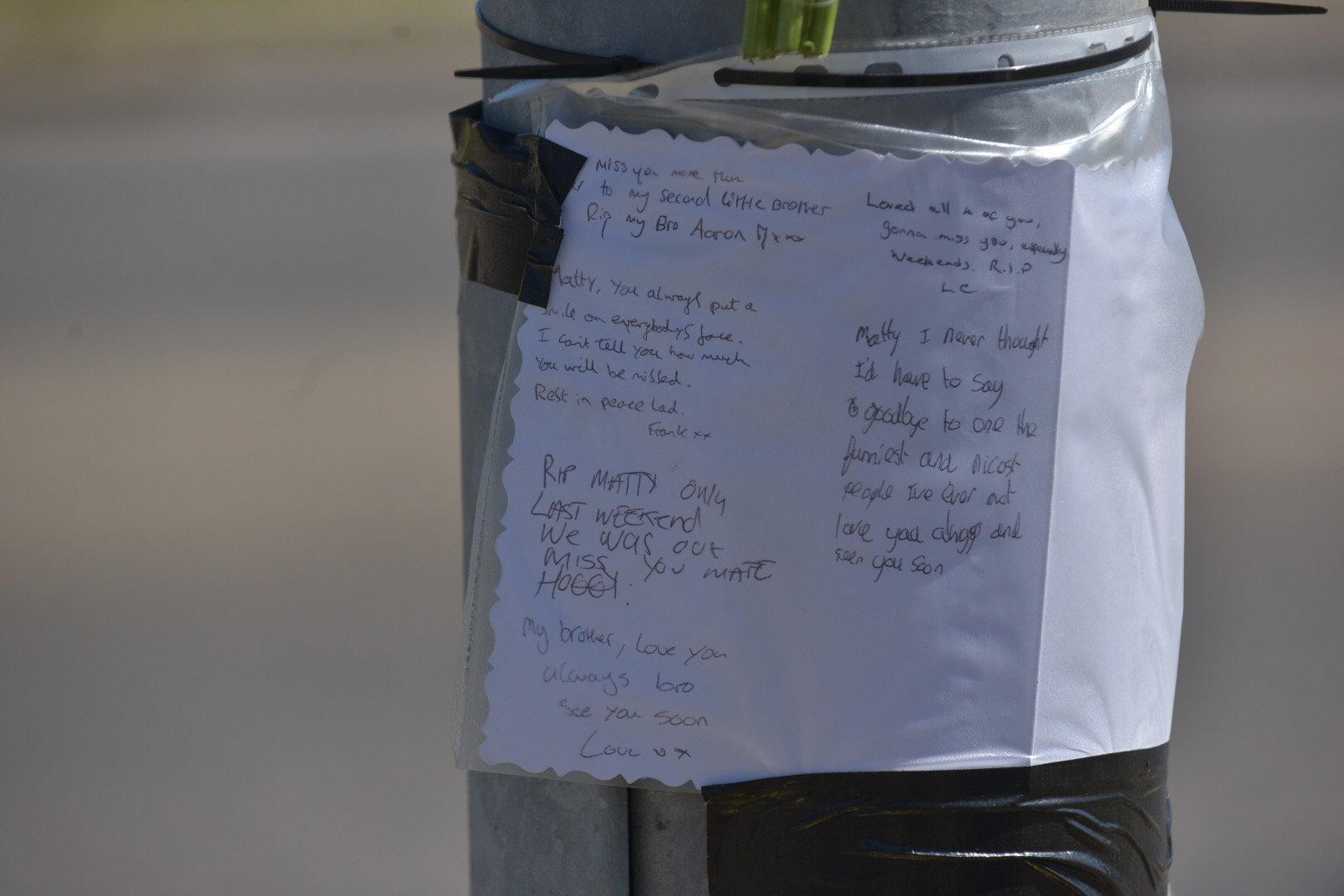 Witnesses described the horrific scenes that unfolded including seeing a young girl crawling out of the wreckage.

Adam Omar, 34, who was asleep with his partner at when the crash happened, told how he heard a "skid" and then a bang which was like an "explosion".

He went outside and saw "half a car" in the middle of the road and a taxi also stationary in the road.

He said: "There was a young girl lying in the middle of the road.

Adam's partner, who preferred not be named, said: "She was obviously in pain because she was making noises and trying to move but it was obviously hurting her.

"After all the police and paramedics had turned up and a car pulled up then a girl got out of the car and started legging it.

"And an older woman got out of the car and started running, panicking, and saying 'where is she?', then they ran over to the police cars." 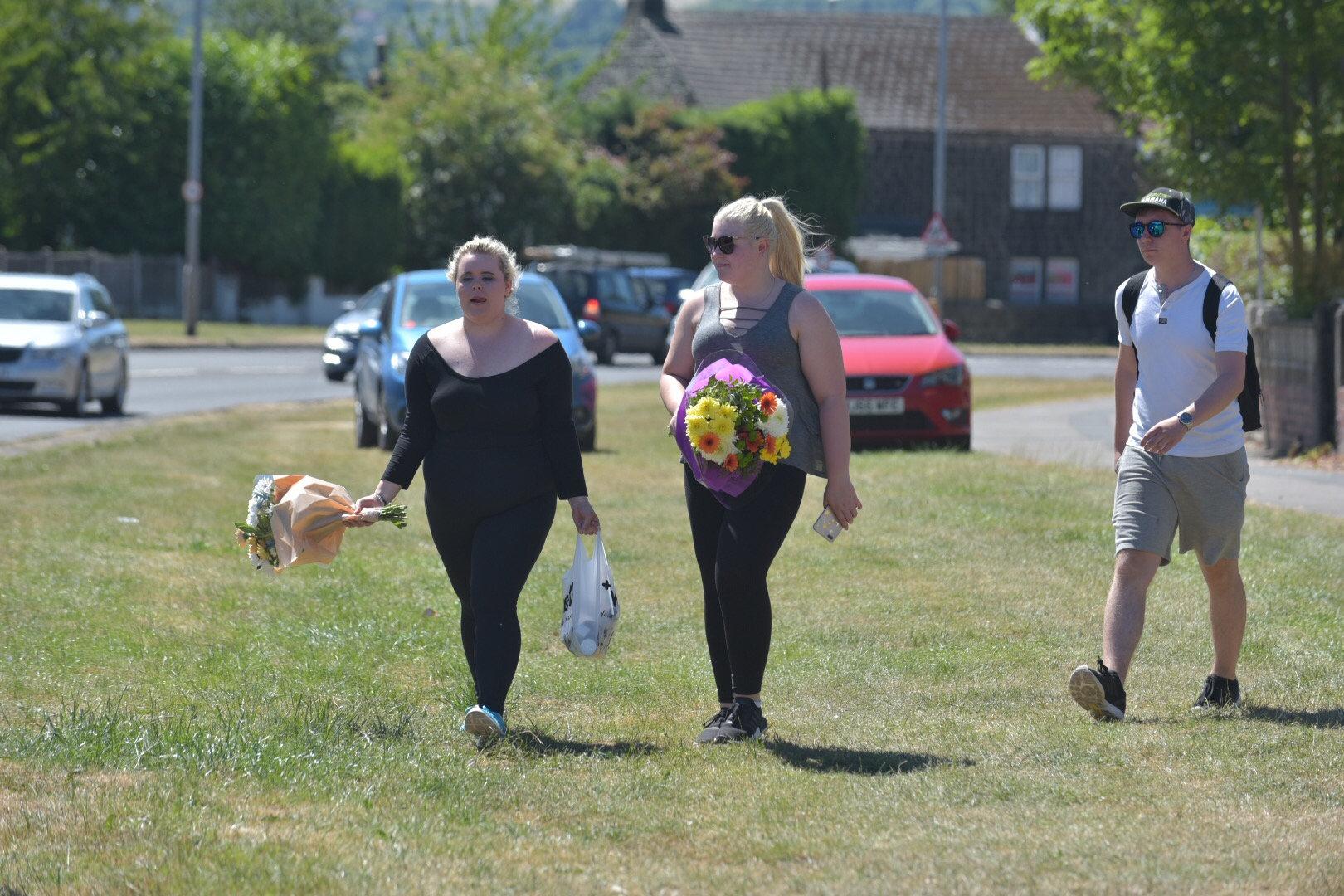 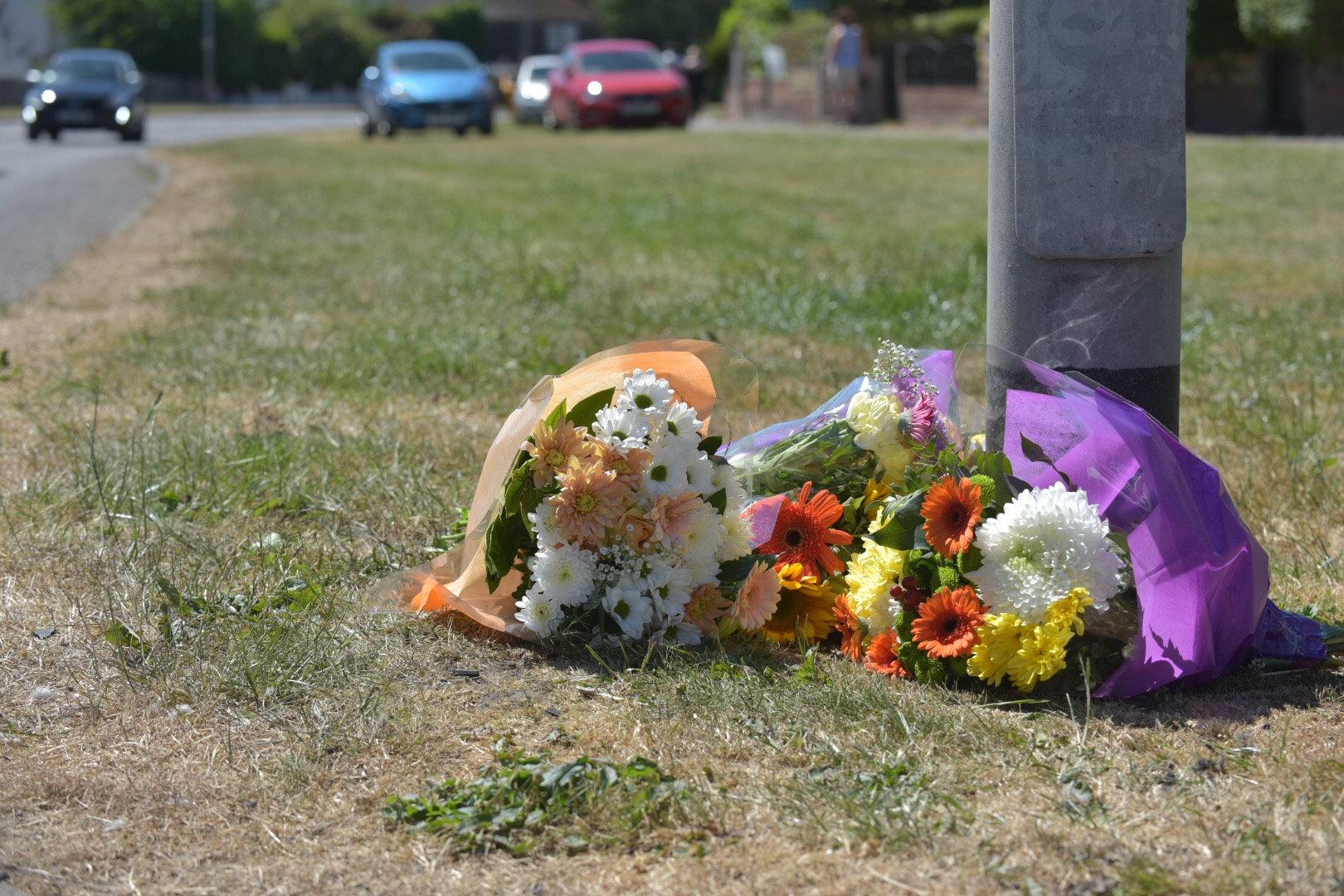 Another neighbour, who also did not want to be named, said her son had been awoken by the sound of the crash.

She said: "He looked out of his window and saw plumes of smoke and debris.

"A taxi was facing out of the junction and the car was facing into it.

"Another passing taxi driver stopped and got out of his car and went over to the silver car.

"He saw him someone out of the of the back of the car on the driver's side then he went to get the taxi driver out.

"The taxi driver was walking wounded but seemed Ok."

It is understood a firefighter called to the scene found his daughter injured in the crash.

Police say the grey Seat Leon car the youngsters were in was travelling "at speed" at the time of the crash.

Police confirmed the driver of the private hire taxi, a 42-year of man from Bradford, was taken to hospital with serious injuries.

The 16-year-old girl injured in the crash remains in a critical condition.

The 17-year-old's injuries are not considered life threatening. 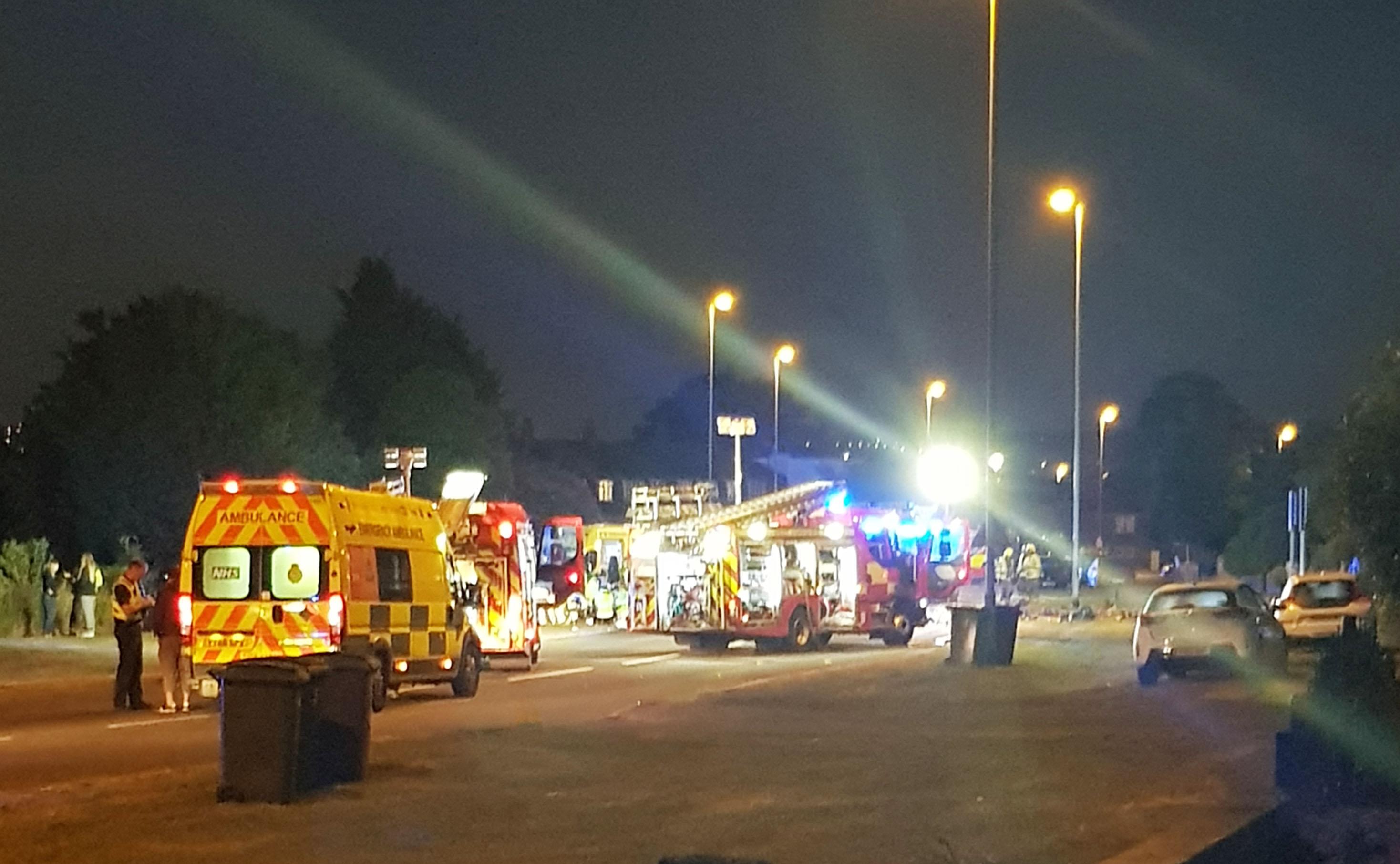 Investigators believe the Leon had been travelling in the direction of Weetwood and the Alhambra was heading in the opposite direction when they collided head-on on Broadway, near to the junction with Bank Gardens in Horsforth.

Sgt Fiona Hoodless, of West Yorkshire Police Major Collision Enquiry Team, said: “This is a very tragic incident where four young men have lost their lives and three other people are in hospital with serious injuries.

“The families of those involved are devastated by what has happened and we are doing everything we can to support them at this very difficult time.

“We are carrying out extensive enquiries to establish the full circumstances surrounding this incident and that investigation is still at a very early stage.

"Early indications are that the Leon was travelling at speed at the time of the collision."

Police are appealing for anyone who witnessed the horror crash to come forward, including anyone with dashcam footage. 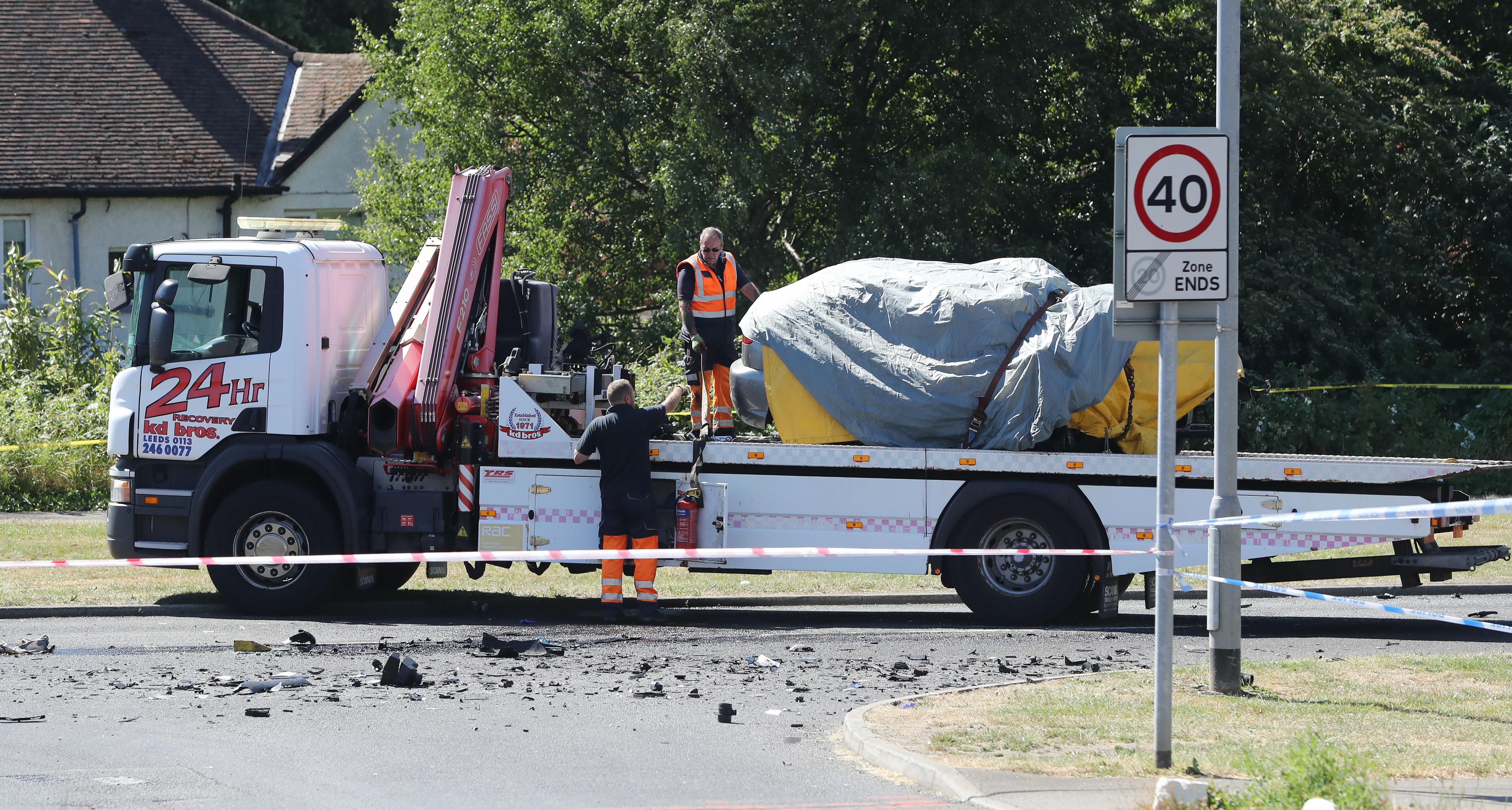 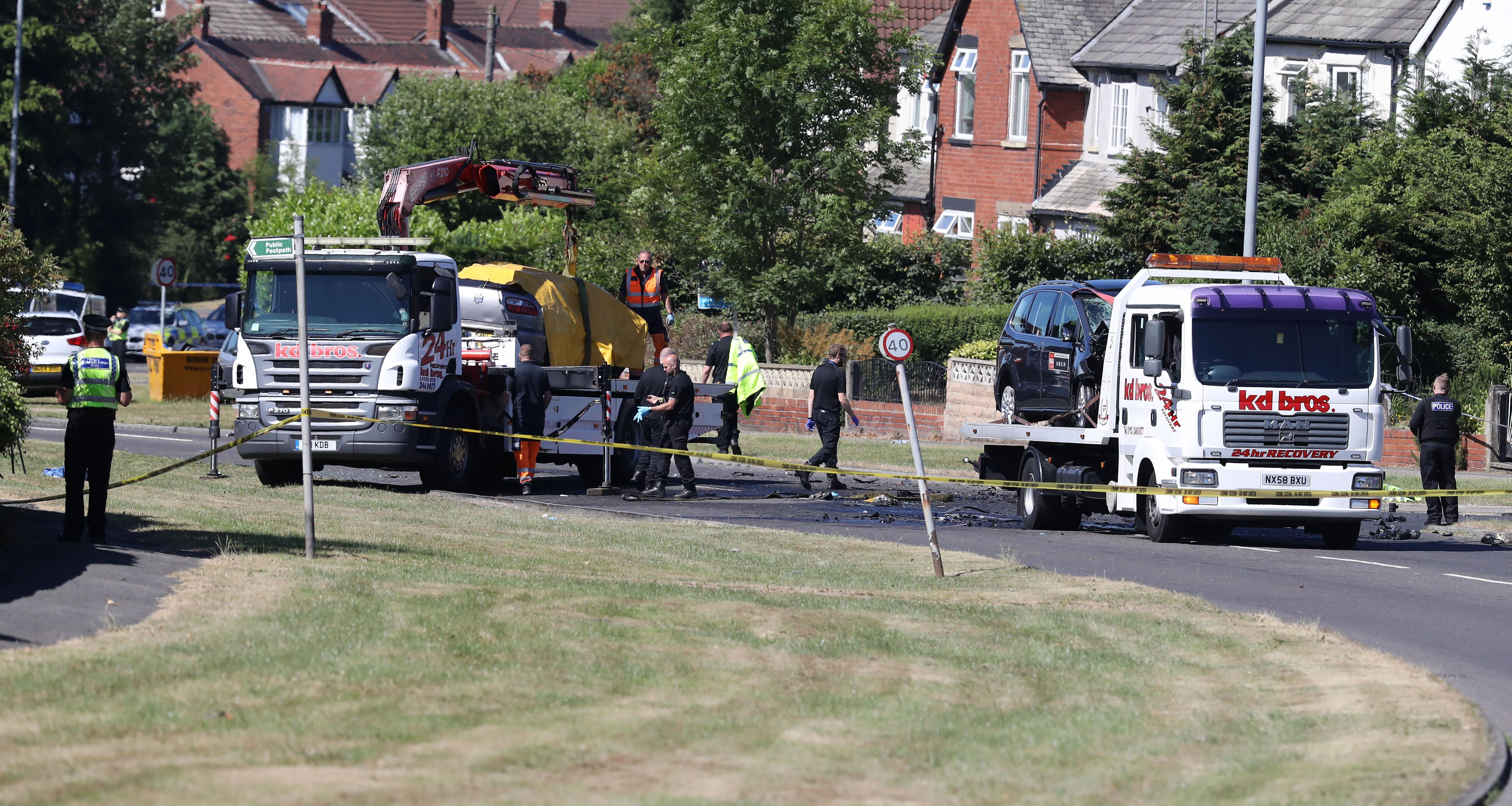 Sgt Hoodless added: "We would like to hear from anyone who witnessed the collision itself or saw the circumstances leading up to it.

"We are also keen to speak to anyone who saw the silver Seat Leon being driven in the area at any point prior to the collision, particularly anyone with dashcam footage that could assist the investigation."

Chief Inspector Richard Padwell, of Leeds District Police, said: “The deaths of four young people in these circumstances is clearly very tragic and our thoughts and condolences go out to everyone affected by it.

“We don’t underestimate the impact that the deaths of these young people will be having in the community and we would ask that people focus on supporting each other and supporting the police investigation.”