Guadalajara, Mexico: Andrés Manuel López Obrador nodded at the sea of red t-shirts and flag-waving devotees jammed into a plaza in Guadalajara.

Never before had such a crowd welcomed him here. In his previous campaigns for the president's office, residents of the wealthy capital of the state of Jalisco, shunned him, considering his leftist platform too radical.

But this time, only days before one of Mexico's most important elections in decades, the cheers reflected a nationwide shift — and the ability of López Obrador to ride it. 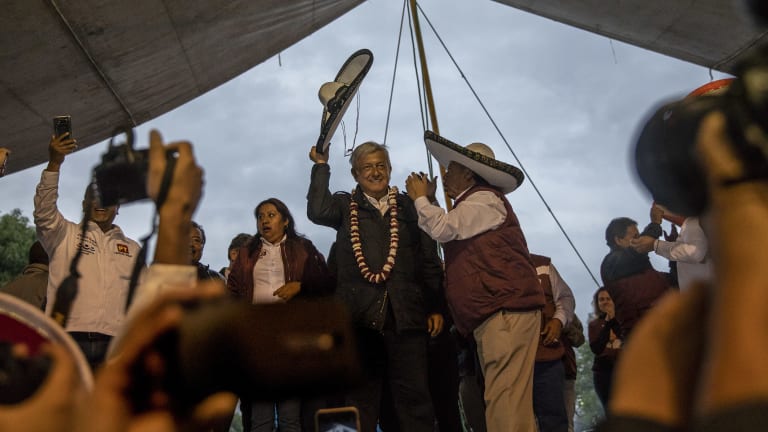 Andrés Manuel López Obrador, a presidential candidate commonly known as AMLO, greets the crowd during a campaign rally in Chimalhuacán, on the outskirts of Mexico City.

"We have had three transformations in the history of our country: our independence, the reform and the revolution," he told the crowd. "We are going to pull off the fourth."

As corruption and violence gnaw at the country, voters have turned to a familiar face in López Obrador, a three-time candidate for president who once shut down Mexico City for months after a narrow loss, refusing to accept defeat.

Brandishing a deep connection with the poor, built over more than a decade of visits to every corner of this country of 120 million, he has managed to build a staggering lead before Sunday's vote.

If the poll numbers bear out on election day, López Obrador — who has promised to sell the presidential plane and convert the opulent presidential palace into a public park — could win by a landslide, putting a leftist leader in charge of Latin America's second-largest country for the first time in decades.

He is currently 20 to 30 percentage points ahead of his closest rival, a stunning reversal for a politician whose future was far from clear just a few years ago. But a broad disgust with Mexico's political establishment has brought him back into the graces of the electorate.

Now, he may confront an American president whose broadsides against Mexico have plunged relations between the two nations to their lowest point in recent history.

But for all the brash, confrontational stances he has taken, López Obrador has been surprisingly moderate on the topic of President Donald Trump, adopting a pragmatic approach that sounds a lot like the Mexican establishment figures he hopes to topple.

"We are going to maintain a good relationship", López Obrador said in an interview. "Or rather, we will aim to have a good bilateral relationship because it is indispensable."

In fact, López Obrador has earned more than a few comparisons to Trump.

We will aim to have a good bilateral relationship [with Trump] because it is indispensable.

Both men lash out at their critics and perceived enemies. Both are suspicious of the press and checks on their power. A sense of nationalism and nostalgia for a lost past are central to their platforms and appeal.

But where Trump tacks right, López Obrador goes left. And while Trump has made Mexico a favourite target, López Obrador describes the North American Free Trade Agreement as a vital part of Mexico's livelihood.

"I mean, the Brazilians, the French can fight with the US, but Mexico, for geopolitical reasons, we simply cannot," he added. "We have to come to an agreement."

For much of his career, López Obrador has focused on two central issues, poverty and corruption, national scourges he views as inseparable. For the masses in Mexico, the twin pillars of his platform hold a powerful appeal. 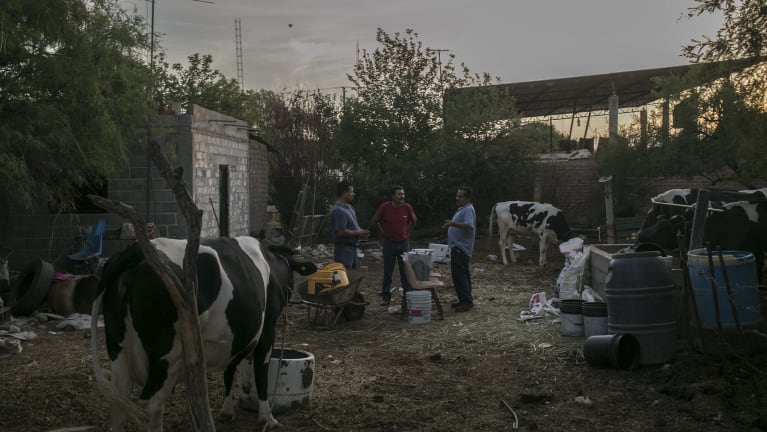 He vows to increase pensions for older citizens, and educational grants for the young. He promises to reduce the top salaries in government, including his own, and lift the wages of the lowest-paid public workers instead. He says he will fight corruption and use the billions of dollars a year in savings to pay for social programs.

Many doubt he can eliminate graft or come up with the windfall he has promised. But after spending the past 18 years vacillating between Mexico's two dominant parties, voters appear increasingly willing to try something else.

López Obrador's positions are largely unchanged from his time as a young organiser for indigenous communities in his home state of Tabasco.

What has changed is the political climate of Mexico.

Stubborn poverty rates and vast inequality, coupled with corruption scandals and a rise in violence, have pushed voters toward López Obrador, who last held elected office in 2005 as mayor of Mexico City.

Beyond that, young people, who are expected to make up about 40 per cent of the vote in this election, have widely embraced López Obrador, who, at 64, happens to be the oldest candidate in the race.

"It's sort of like a pox on all their houses," said Roberta S. Jacobson, the former US ambassador to Mexico. "He was the only one who could successfully paint himself as an outsider — and there are a lot of people in Mexico who feel that they are outside."

Indeed, López Obrador's electoral prospects owe as much to the current president, Enrique Peña Nieto, as to his populist language and promises to take on the powerful. 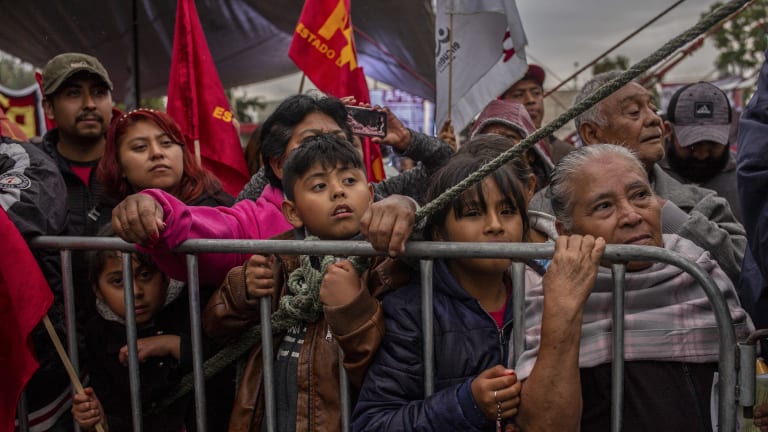 Supporters of presidential candidate Andrés Manuel López Obrador during a campaign rally in Chimalhuacán, on the outskirts of Mexico City.

Presidents in Mexico are allowed just one six-year term, and Peña Nieto's tenure was marked by corruption. After it was revealed that his wife had bought a luxury home at a steep discount from a government contractor, a federal investigation cleared him of any wrongdoing.

After his administration's plodding response to the disappearance of 43 students was challenged by outside experts, the experts were essentially kicked out of the country. After evidence surfaced of illegal spying on journalists and human rights activists, a government investigation went nowhere.

Notably, the election debate has had little to do with Trump, who has taken aim at many aspects of life in Mexico, especially trade and migration. The primary drivers of this election are domestic issues — corruption, violence, poverty — that play right into López Obrador's hands.

As for a personal relationship with Trump, even some of López Obrador's closest aides said they were unsure how López Obrador might react to the insults that the current president of Mexico has taken on the chin.

López Obrador, for his part, says Trump is simply playing to his base.

"Trump is a politician, more than what people assume, he acts politically, and it worked for him, his anti-immigrant policy and anti-Mexican rhetoric, the wall," he said. "He tapped into a nationalist sentiment in certain sectors of American society."

López Obrador has instead focused internally, frightening many Mexicans with his vow to take on the "mafia of power," his shorthand for the business and political elite.

He says he can save more than $20 billion a year by attacking corruption, a figure he wields in speeches but whose provenance is unclear.

To critics, his crusade is representative of the dangers a López Obrador presidency might bring. Some fear he oversimplifies the problem of graft and the task of eradicating it — as well as the price tag for his grand ambitions.

These same critics note that when he ran Mexico City, despite his broad popularity, he was unable to rid it of corruption.

López Obrador is keenly aware of the ways Mexicans, who have long suffered at the hands of the wealthy and powerful, can be drawn into his orbit.

In both style and message, he conveys simplicity. He lives in a modest two-story town house, flies coach to his campaign events and owns just a handful of suits.

But behind the humility of his approach is a complex and unflinching ambition to reshape Mexico. For some, arguably including López Obrador himself, he is something of a messiah, the chosen leader to cure his nation's ills.

"He genuinely thinks he is the best outcome for Mexico," said Kathleen Bruhn, a professor at the University of California, Santa Barbara, who has studied López Obrador's career. "But I don't think that is incompatible with him wanting to accumulate a lot of power."

His division between good and bad extends to critics and institutions that he feels do not serve his agenda. Many worry that his assumed moral authority will put him at odds with the same institutions he should protect. 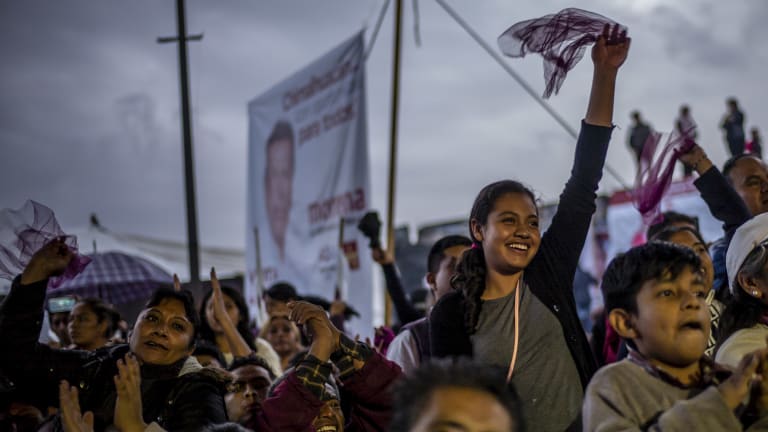 He has fought with the Mexican news media, accusing it of corruption and bias. And while the news media here has long survived on government money, which heavily influences coverage, his anger is a sign to many of a worrisome characteristic: an inability to take criticism.

Civil rights and pro-democracy groups are also sometimes dismissed by López Obrador, despite being among the few counterbalances to the rampant impunity in Mexico. Many of the nation's most prominent anti-corruption advocates are fearful of a López Obrador presidency, worried that their nascent movement will be all but frozen out of the discussion.

When López Obrador was mayor of Mexico City, organisers planned a march to protest the rising number of kidnappings, a tragic outcome of the nation's war on drugs.

He initially refused to meet with the organisers, derisively referring to their initiatives as projects of the wealthy.

María Elena Moreira, who now runs the nonprofit group Common Cause and helped organise the march, said she worried that López Obrador would marginalise outside efforts to improve Mexico's democracy.

"You have to understand how to institutionalise this change, not tie all of it to just one person's mission," she added.

When he left office, López Obrador enjoyed close to an 80 percent approval rating. The presidency did not seem out of the question. But the conservative National Action Party, which held the presidency, managed to paint him as a radical and a threat to democracy.

In a hard-fought battle, López Obrador lost by less than 1 percent in the 2006 election, and almost immediately took to the streets to protest what he claimed was widespread fraud. His supporters took over the central plaza downtown and blocked one of the main traffic arteries through the city, Reforma Avenue.

He then held an inauguration ceremony for himself and named a shadow Cabinet to govern the nation, declaring himself the rightful president.

The move seemed to validate some of the harshest criticisms of him, alienating some of his supporters. Eventually, he packed up and moved on, and many commentators wrote him off.

He lost again in 2012, by a significantly larger margin. But López Obrador continued to build his coalition and prepare for another run.