Teressa Parker spent Friday on her verandah watching the flood waters slowly inundate her mother-in-law’s nearby home at Nagles Gully on the banks of the Hawkesbury River.

Just like last year, she evacuated her mother-in-law, Patricia, to her place higher up the hill. It was only in October that Patricia, 87, was able to return to her own house after the March 2021 floods. 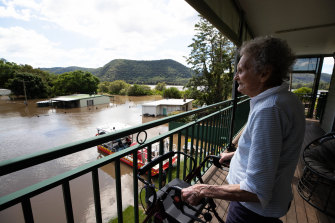 Patricia Parker views her submerged home from the safety of her son and daughter-in-law’s house during the 2021 floods.Credit:Janie Barrett

Then premier Gladys Berejiklian described that flood as a “one-in-100-year event”. Her successor Dominic Perrottet called this week’s sequel a “one-in-1000-year” occurrence. But it doesn’t feel that way to Parker.

Record flooding in northern NSW and Queensland delivered a week of tragic deaths, shocking stories and arresting images; the dramatic police rescue of a 93-year-old woman floating on a mattress in her Lismore house; local MP Janelle Saffin swimming to safety; cows stranded on roofs and a Gold Coast beach; a quad bike hanging off power lines in Gympie.

Sydney was spared the worst of the rain but major flooding was still occurring at Wisemans Ferry on Friday afternoon and authorities warned the danger was not over, with more wild weather expected on Sunday and any additional rainfall a threat. 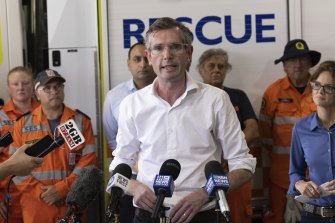 Premier Dominic Perrottet announced a taskforce to lead the flood clean-up across the state. Credit:Brook Mitchell

The death toll on the east coast has steadily climbed to 15; five in NSW and 10 in Queensland. And as the water recedes and the clean-up begins, discussions will inevitably turn to how (or whether) we rebuild, what can be done to mitigate future risks and how we should view these events in the context of climate change.

Perrottet, as the Herald reports today, faces mounting pressure over the failure to anticipate or better plan for what happened in Lismore – “unprecedented” though it may have been – following the earlier deluge further north. Conditions made it impossible to get more rescue aircraft into the skies, Perrottet said on Friday, but promised everything would be reviewed and the lessons learnt. There is also argy-bargy between the federal government and NSW about why more defence force personnel weren’t deployed to the disaster zones.

If it increasingly feels as though political leaders spend most of their time responding to crisis after crisis, Queensland Premier Annastacia Palaszczuk would probably agree. “I’ve never seen so many natural disasters, we seem to be dealing with more and more; more cyclones, more floods,” she said on Friday. “Let’s face it, it’s climate change.”

Prime Minister Scott Morrison also acknowledged we would see more calamities because of climate change. “This is what the Bureau of Meteorology is telling us, this is what all of these things tell us,” he told Perth’s 6PR radio.

Morrison’s hand-picked head of the National Recovery and Resilience Agency, former Liberal Party president Shane Stone, boasts that since he was appointed to the North Queensland flood recovery agency in 2019 – which later morphed into the NRRA – there have been nearly 400 disasters and he has never had a funding request knocked back by the government.

But does the sheer number of disasters in such a short period of time cause him to reconsider his perspective on climate change? “It doesn’t because I’m not a climate denier,” he says. “I’ve been on the front foot saying it’s an ever-changing environment. [But] if you closed down every coal mine in Australia, would that have stopped these floods? The answer is no.”

The floods coincided with the release of the United Nations’ most recent assessment of global efforts to adapt to the changing climate. According to the Intergovernmental Panel on Climate Change report, recent heavy rainfall events around the world leading to catastrophic flooding “were made more likely by anthropogenic [man-made] climate change.”

It found that over 20 million people have been internally displaced annually by weather-related extreme events since 2008, with storms and floods the most common drivers, and that the impacts of climate change were being felt far sooner than had been predicted.

The Australia Institute’s climate and energy program director Richie Merzian said the situation had been exacerbated in Australia because no comprehensive national risk assessment or adaptation plan had been undertaken.

“[Federal governments] have pushed this issue down the states who have often pushed the responsibility on to local governments,” he said. “Local governments are the least able to understand how to best respond and pay for the adaptation and the planning to do so.”

A spokesman for Environment Minister Sussan Ley said the government had announced a national strategy in October which included a National Adaptation Policy Office to co-ordinate across governments and provide a central point of contact for businesses and communities.

The government will also invest $38 million into a new “climate systems hub” to help inform climate adaptation solutions for Australia.

President of the Local Government Association of Australia Linda Scott said in view of the rapidly changing climate, local sectors would welcome the chance to contribute to national risk assessment and planning by higher levels of government. “It is clear the failure to act on mitigation to prevent disasters is being felt today,” she said.

The LGAA is calling for $200 million a year for local governments for a disaster mitigation fund and a further $200 million over four years for a Local Government Climate Partnership Response Fund in line with a recommendation of the Productivity Commission in 2014. 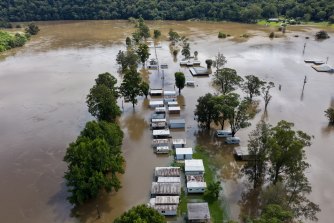 Flooding in Cumberland Reach along the Hawkesbury River on Friday.Credit:Nick Moir

But it’s not just a matter of money; the bigger question is what mitigation and adaptation should look like. In some flood prone areas, particular projects have been identified: the Bundaberg East Flood Levee, which is waiting on a $40 million co-commitment from the Commonwealth, while on Sydney’s western fringe, there is ongoing debate over raising the wall of Warragamba dam and whether to allow more residential development near the floodplains.

Stone, the resilience and recovery agency co-ordinator, caused a stir with his blunt comments that people who wanted to “live among the gum trees” on floodplains needed to face reality and move.

“This is a very complex conversation that the government’s got to have,” he told the Herald. “I know that local councils come under a lot of pressure to allow development. But you and I and the rest of the Australian taxpayers should not be having to step up over and over again for poor planning decisions.”

Stone – who drafted the infamous 2001 memo saying John Howard’s government was seen as “mean and tricky” – was attacked by Labor figures who suggested the NRRA boss was now being mean and tricky himself and called on him to resign.

But Stone says he’s just being realistic and restarting a much-needed conversation. He says he doesn’t blame the residents, who ought to receive financial aid to resettle. “You can’t just say to people ‘oh you can’t build there, you need to go’. You’ve got to help them go.”

Stone says this applies to the Hawkesbury-Nepean floodplain as much as it does parts of Lismore and even the Brisbane River, where he knows people who have been flooded three times. “This is pretty dramatic stuff but, hey, in places like the US and Europe they do move communities.”

And not just there. He notes the Victorian town of Tallangatta was shifted eight kilometres along the banks of Lake Hume in the 1950s to allow the lake to expand.

The idea of abandoning the floodplains was rejected by some senior NSW government ministers, including Planning Minister Anthony Roberts, who said the housing crisis meant it was no time to “pivot away” from areas afflicted by fire or flood.

But others acknowledged there may be a need to step on the brakes. Perrottet said development in vulnerable areas obviously needed to be kept to a minimum, while former planning minister Rob Stokes, now in a related cities and infrastructure portfolio, said every option must be on the table.

Hawkesbury City mayor Patrick Conolly said his council “doesn’t have a position” on whether residents should be moved out of the floodplains.

“It’s not a concept that’s hard to agree with,” he said. “But when you try to apply that to individual properties and start having conversations with real people, it’s not as clear-cut.”

“The amount of property that needs to be bought up is of astronomical value,” he said. “Council’s position is that they should just hurry up and raise the dam wall.”

For Teressa Parker and her mother-in-law Patricia, two floods in 12 months is a shock, but it’s too early to reconsider their future. “I haven’t really thought that far ahead at the moment,” Teressa says. “It hasn’t been a good year.”