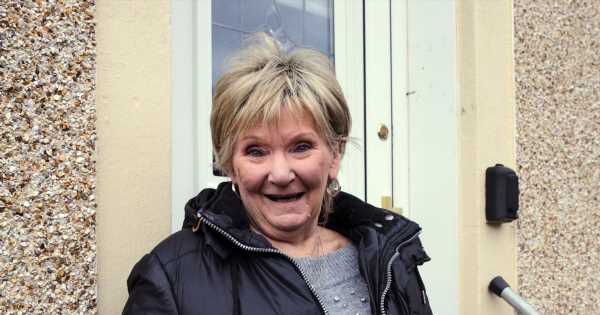 Hundreds of lucky neighbours in Scotland have scooped a share of the People's Postcode Lottery's biggest jackpot ever.

More than 600 neighbours in Wishaw, North Lanarkshire, banked part of the £8 million prize pot with six winners getting the biggest share, as they had the full winning postcode of ML2 0EN.

The lucky punters managed to scoop £368,461 each in the biggest single prize pot to be awarded in Scotland in the lottery's history.

Among those to land a six-figure sum was Jean Moffat, 74, who screamed with joy as her prize cheque was revealed. The gran-of-six was so stunned by the win that she dropped her cheque.

After picking it back up, she said: "I'm going to frame it and put it on the wall. It's amazing.

Jean wasn’t the only person in her family to scoop a prize as hundreds of people across the town netted £8,092 per ticket.

When asked if she wanted anything for herself, Jean said: "I don't need big fancy things. I'll get a new oven. I went for one yesterday but they weren't in stock. "I can get the dearer one now! I bake all the time so I'll need a new one! I'll still be happy with my fish suppers, I'll not be switching to caviar!"

Katrina Drummond, 47, was another to receive a prize cheque for "368,000 smackaroonies".

The mum-of-one added: "I would have been happy with just one thousand. Anything after that is a bit of a miracle. It's completely life-changing."

She added: "My car broke down a couple of weeks ago and it sat outside for a week with a dead battery and I've got a few scrapes on it that I call racing stripes. It doesn't have air conditioning either because it's too expensive to fix!"

Andrea Boyle, 42, was stunned into silence on seeing her six-figure prize cheque.

The mum-of-four learned of her windfall alongside her husband, William, who said some of the winnings would go to treats for their kids.

He said: "I'm numb! Excited, it feels like I’m looking down on myself. I don't know what to say."

When asked who he was going to tell first, the joiner said he would surprise his mum.

He joked: "My mum is away to Lanzarote. She's on the plane right now, she'll be excited when they land!"

Paul, who has lived on the street for 16 years, said he was pleased to hear about the other winners as well.

When asked what he would do first, Paul added: "I'll be celebrating tonight. I'm going to enjoy myself, that's for sure!"