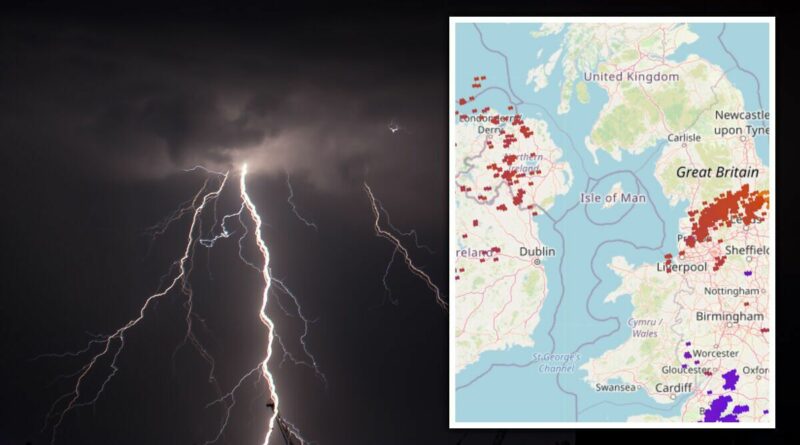 UK weather: Temperatures to reach highest of the year so far

People living in Dorset described thunderstorms which were reportedly “the best in three years”, according to a weather expert. Shaun Lovett, who runs the Dorset Snow Twitter account claimed the storm was the best the county had witnessed since July 2019 and was impressed with the length of the thunder.

In some areas, the storm lasted for up to five hours which prompted residents to capture stunning pictures of the lightning that brightened Dorset’s night skies.

Mr Lovett said: “Most are saying it’s the best storm since July 2019. What made this storm so impressive was the longevity.

“Some areas of the county saw up to five hours of lightning strikes.

“Strong vertical wind shear was enough to fuel these storms and maintain them through large parts of the evening and night.”

Mr Lovett told Dorset Live: “We’ve seen many storms attempt to cross the English Channel and die out in recent years, but it seems this storm was elevated to around 12km and this was enough to survive crossing the cold water between France and England.”

By 9.30pm on Monday, thunder was also reported in North Yorkshire. Mr Petagna said on Twitter it was “still rumbling” around York and Leeds.

The Met Office said for the remainder of the evening: “Rain and showers in north gradually dying out, though cloud and some drizzle persisting for northeast Scotland.

“Elsewhere good clear spells along with a few fog patches in south. Further cloud and some rain into far west later.”

The Met Office said the rest of the week will be “dry and sunny”, with patches of rain in the North East. However, much of the north of England and Wales, along with Northern Ireland and parts of Scotland, saw thunder and lightning today.

Met Office chief meteorologist Andy Page said: “The plume of warm air we have been expecting from the south will bring higher temperatures across the whole country over the next week.

“However, it looks like the effects from the Atlantic lows will prevent sustained high pressure building from the east.

“This means that while we might see some warm – and in places very warm – days, overall the next week will feel more like what we would expect of a warm spell in May, with some heavy showers around, rather than hot summery weather.”

Russian forces stunned after commander sends vodka instead of troops

Jo Farrow, Netweather.tv forecaster, said: “Today we are looking at a scattering of heavy showers and thunderstorms, set off as the sunshine warms the surface.

“Some places will stay dry and feel warm. The showers fade this evening taking their time of northern England, north Northern Ireland and central Scotland

“Overnight the wind turns to the south, very light for much of Britain, brisk around Ireland and still a fresh easterly for the Northern Isles. In this southerly flow Tuesday looks much warmer for parts of Britain.

“Temperatures in more places will be in the high teens, low twenties with a few parts seeing 24 to 26C. With fine sunshine and light winds it will feel more like summer.

“A band of cloud and damp weather will be over Wales, the Irish Sea and Northern Ireland to start Tuesday with heavier rain developing near to SW Britain.

“This is a cold front with less humid air following but still anywhere seeing sunshine could feel warm. However this front will develop during the day with the heat ahead of it and there will be torrential rain in places by the end of Tuesday.

“This brings the risk of localised flooding and will need watching as it has been so dry for some parts of England.”