Local lockdowns have been lifted in parts of north-west England today meaning people from different homes can meet indoors again – despite pleas from council leaders in Bolton and Trafford to maintain restrictions due to a spike in cases.

Businesses in both towns that opened elsewhere on August 15, such as casinos, bowling alleys and indoor concert venues, will also be allowed to reopen.

Restrictions on mixing households have also been lifted in Stockport, Burnley, Hyndburn and parts of Bradford, Calderdale and Kirklees, although they remain in place in other areas including Oldham, Pendle and Leicester.

Meanwhile, a rise in cases in Scotland has seen new lockdowns introduced in Glasgow as well as in East Renfrewshire and West Dunbartonshire. 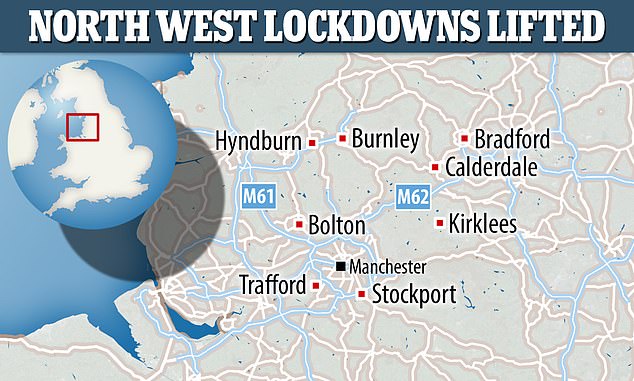 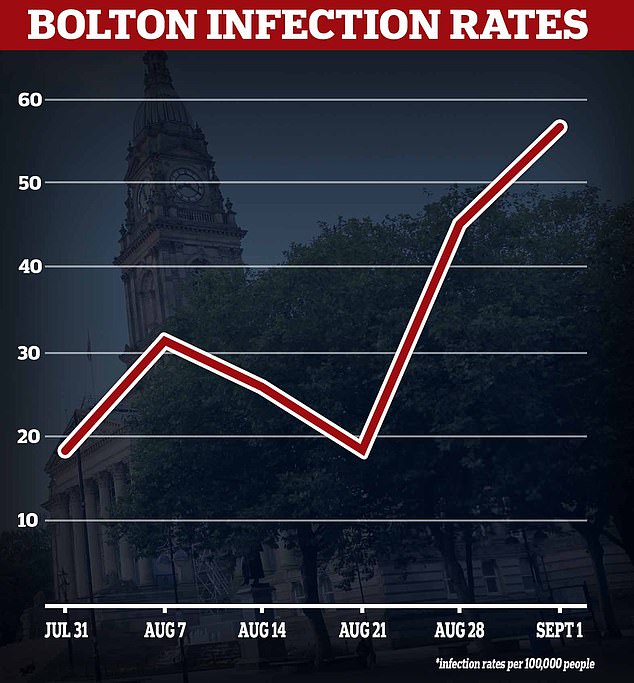 Restrictions have been in place across much of the North West since July 15, prompting frustration from many local people.

However, council leaders in Bolton and Trafford have called on the Government to scrap plans to lift the lockdowns after an ‘unforeseen’ spike in cases.

The request was made following an emergency meeting between officials as the rate of new Covid-19 cases in Bolton surged over the weekend from 44.9 per 100,000 on Friday, to 56.4 per 100,000 yesterday.

Meanwhile, Trafford recorded 170 new cases up to August 29, up from 53 the week before. Its current rate of new cases at 59 per 100,000 residents puts it among the highest in England.

Analysis showed that new cases in Bolton were spread across the borough and not limited to a single area, community, or place of work, said the council.

Infections between different households appear to be the main cause of the spike with people aged 18-49 representing the overwhelming majority of new cases, it added.

Conservative leader of Bolton Council, Councillor David Greenhalgh, said: ‘It is with a heavy heart that the cabinet and officer team have come to this decision and this will be incredibly disappointing for both residents and business owners.

‘We urged the Government to lift Bolton out of the additional restrictions at a time when infection rates were low. 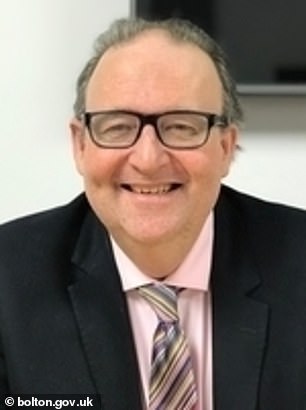 ‘This was the right decision at the time.

‘However, there has been a sudden and unforeseeable rise in the number of coronavirus cases in Bolton.

‘We have always been led by the data, which means we have no choice but to act quickly to keep everyone safe.’

Any reversal in the plans would also mean that certain businesses, including those offering close contact services, will not reopen as planned.

Bolton was due to join Stockport, Trafford, Burnley, Hyndburn and parts of Bradford, Calderdale and Kirklees in falling into line with restrictions currently in place in most of England.

Council leaders in Trafford had recommended that restrictions be maintained to wait for more evidence of a sustained downward trend in positive cases but were overruled by the Government.

Latest figures show the seven-day infection rate in Trafford is up from 19.0 to 35.8, with 85 new cases recorded, the highest rate for Trafford since the end of July when the additional restrictions were imposed. 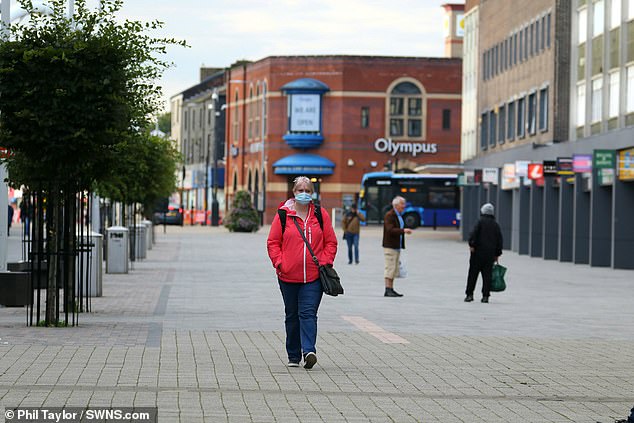 Where are the new Scottish lockdowns?

From midnight tonight, lockdown measures will be introduced in the following areas:

In his letter, Mr Western said: ‘Sadly I must highlight to you that Trafford has now returned to the Government’s own amber zone in terms of cases of 100,000 population, and now has a significantly higher rate of cases than some other Greater Manchester boroughs who are not due to see restrictions lifted tomorrow.

‘In short, this decision has caused chaos and confusion that not only impacts potentially on the health of my residents but on the likelihood of compliance in neighbouring boroughs that now have a lower infection rate than Trafford.

‘The system has been undermined by the Government’s decision-making processes.’

He added he was ‘very disappointed’ that its representations to Government last week were ‘completely ignored’ along with ‘two of our three local MPs, two of our three opposition group leaders and our director of public health’.

Mr Western said it ‘only serves to exacerbate fears that national government never intended to meaningfully consider such views but rather to only have regard for the views of Conservative MPs in the areas affected’.