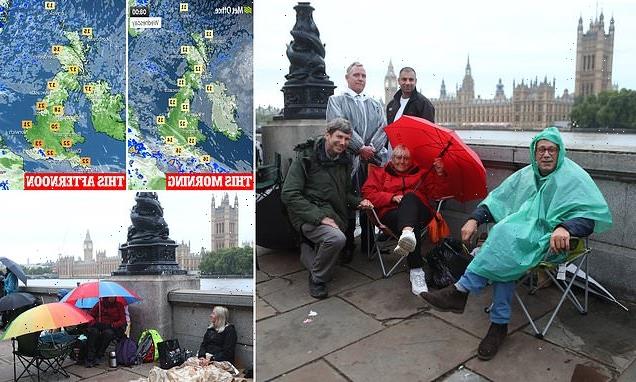 Braving the wind and rain to see the Queen: Hardy mourners defy weather warnings as downpours hit the south – but the sun will come out later today as temperatures hit 73F

Mourners lining the streets of London to see the Queen’s coffin endured a wet morning today – although conditions are set to brighten up by lunchtime with 73F (23C) highs and sunshine in the afternoon.

The late monarch’s lying in state at Westminster Hall opens to the public later today at 5pm and mourners will pass through 24 hours a day until it closes at 6.30am next Monday – the day of the Queen’s state funeral.

People will also be packing the streets of London today to see a procession taking the late monarch from Buckingham Palace to Westminster Hall, which will begin at 2.22pm. Viewing areas for the public along the route will open at 11am, with large crowds expected, and the procession is set to arrive at Westminster Hall at 3pm.

A weather front was situated along the South of England in the very early hours of today, although high pressure from the Atlantic was trying to nudge its way in to potentially throw the rain off course of the capital.

But forecasters said the morning would still be a wet one for London, although the showers and any mist and fog patches will gradually clear to leave sunny spells for many later in the day. 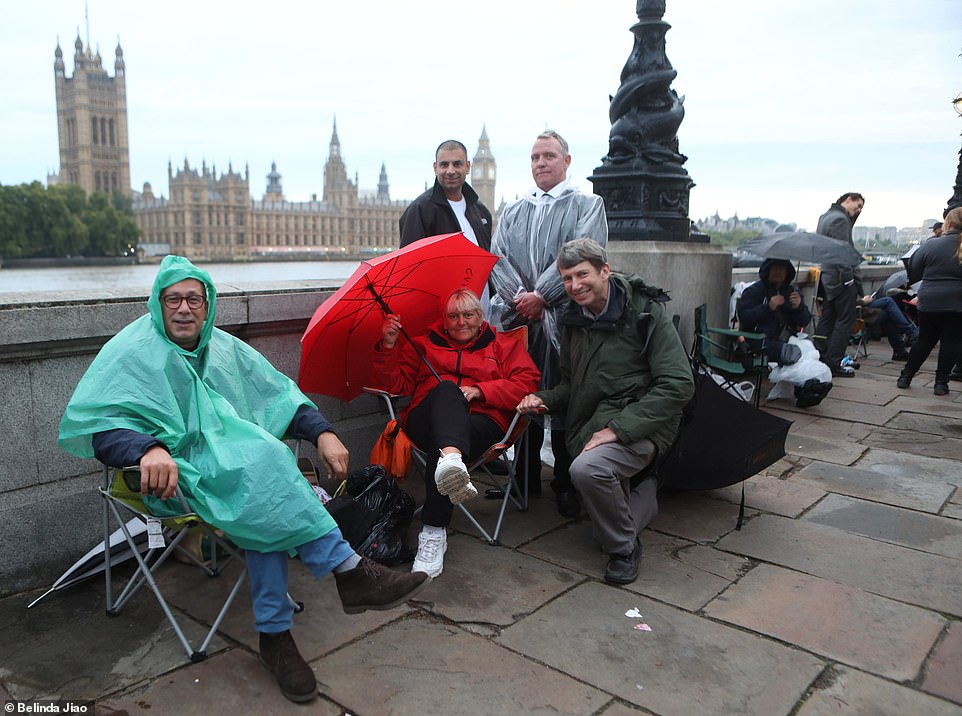 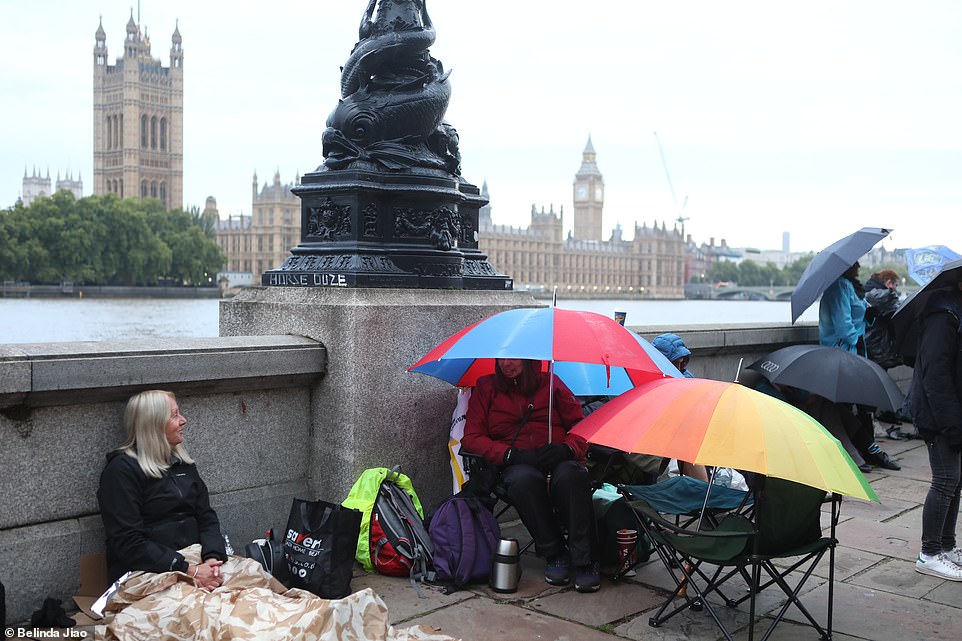 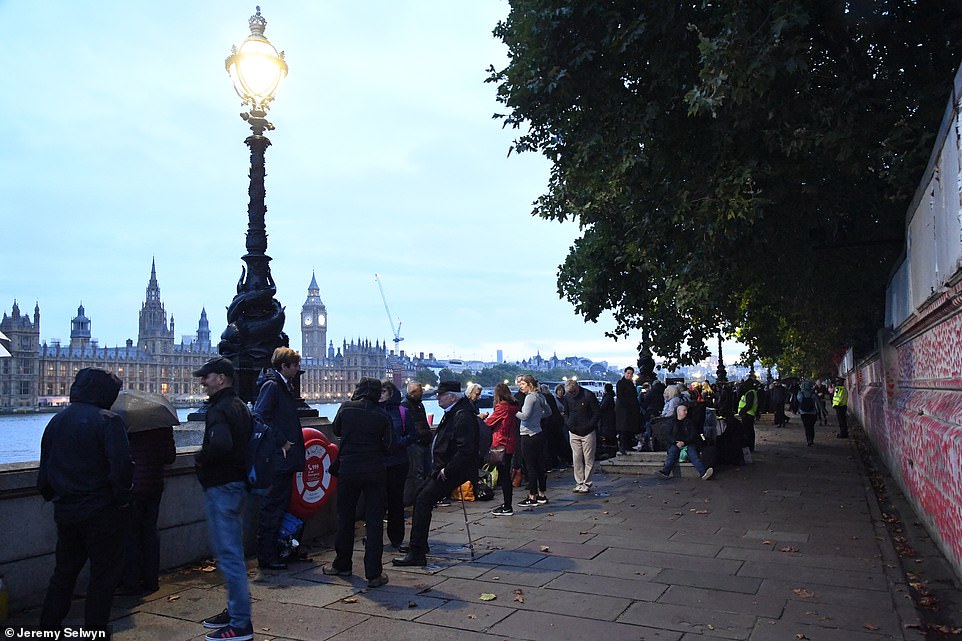 BBC Weather forecaster Simon King said it would be ‘a rather wet start to the day on Wednesday – especially so in London where people may be queuing to see the lying in state throughout the day’.

That rain was expected to clear before midday though, and by the afternoon temperatures were expected to get up to 73F (23C) and ‘quite pleasant’, with sunny spells developing across the whole of the UK.

The ‘settled, fine, dry’ conditions are then expected to last until the beginning of next week, the Met Office said, with conditions set to ‘start to calm down a bit with the high pressure moving in’.

This evening will be generally dry with late sunshine and variable amounts of cloud cover, and overnight will then continue to be mainly dry with clear spells but with large areas of cloud cover and a chance of showers.

Tomorrow will be drier and brighter with spells of sunshine, but variable amounts of cloud cover will tend to build during the day. There is also a threat of showers developing, most frequent across northern Scotland. 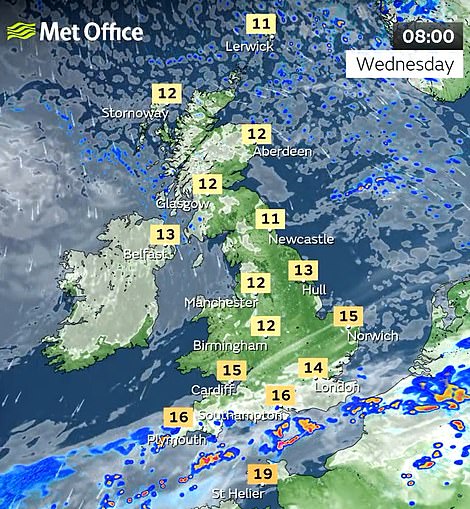 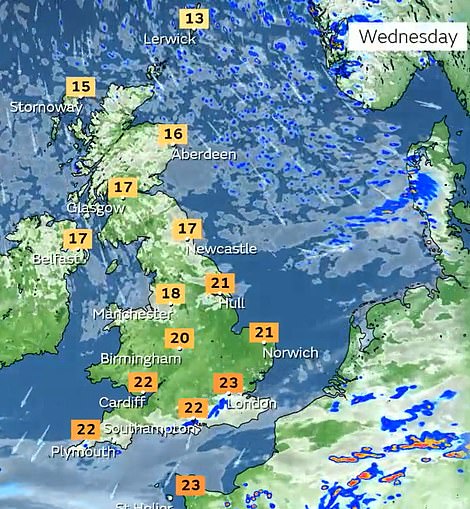 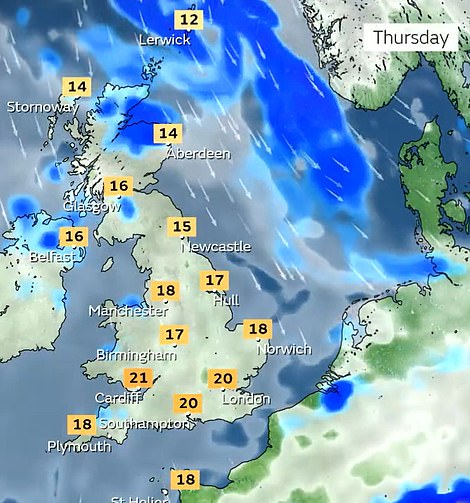 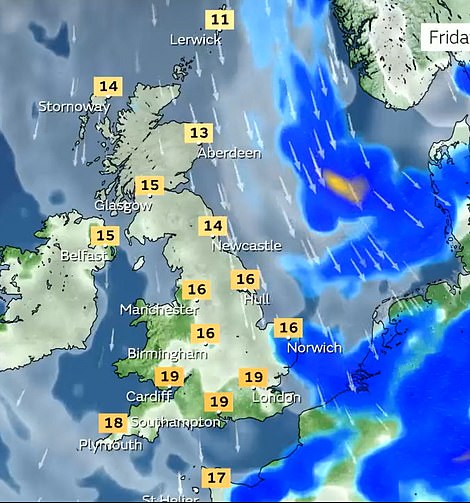 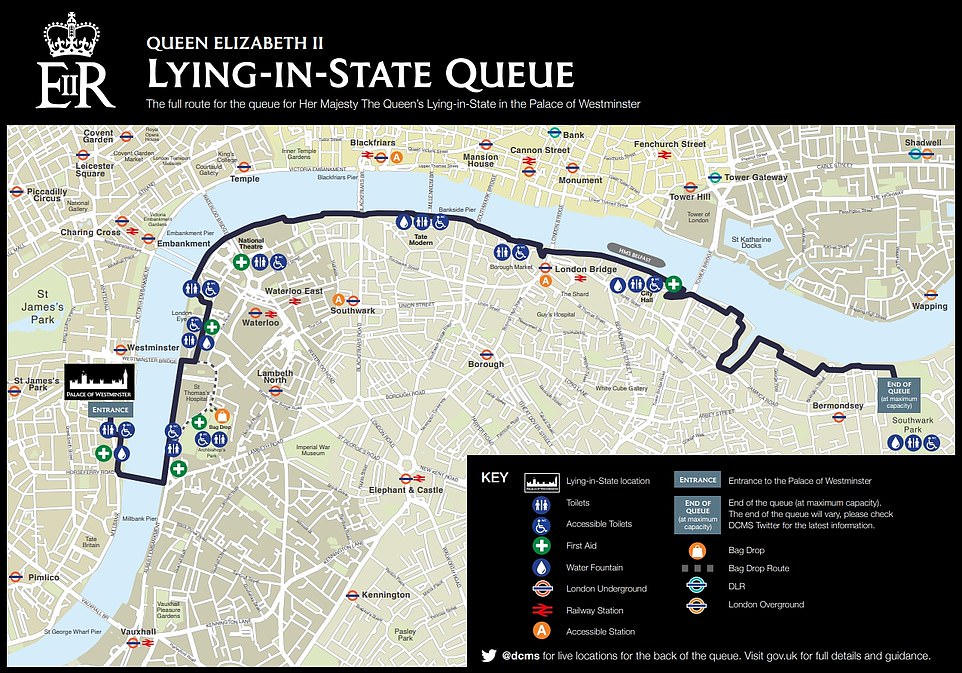 Showers will ease and clear during the evening to reveal late sunny spells, before Friday will be mostly dry and bright with lengthy sunny spells although there is a chance of showers in the north and east.

Saturday will be dry with sunny spells although large areas of cloud will build in from the North and rain will spread into northern Scotland.

The Queen’s coffin arrived at Buckingham Palace yesterday evening – where it was met by the King, his siblings and both his sons.

The casket remained in the palace’s Bow Room overnight while outside in the dark and the rain, more and more mourners joined the queue to pay their respects.