Los Angeles: It took nearly a year and a half, but officials voted Friday to declare Los Angeles a "city of sanctuary", long after other left-leaning cities took a similar stand against the Trump administration's policies toward immigrants who lack legal status.

At the time, Councilman Gil Cedillo and Council President Herb Wesson called the proposal a response to President Donald Trump's plan to unwind the Deferred Action for Childhood Arrivals program, which protects immigrants brought to the United States illegally as children.

But their resolution sat in committee for months. Critics questioned whether they would turn their news conference rhetoric into an actual label for an immigrant-rich city. 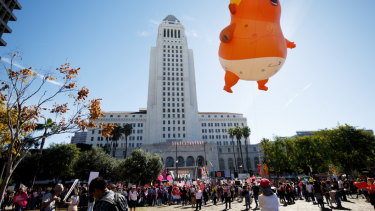 Immigrant-rights advocates said Friday's vote came too late to have much impact.

"They missed the opportunity to do this when it really mattered – back when the immigrant community of Los Angeles needed to know where its city stood," said Hector Villagra, executive director of the ACLU of Southern California.

The resolution doesn't provide any new legal protections for immigrants but instead reaffirms existing policies, including Special Order 40, which bars Los Angeles police officers from initiating contact with someone solely to determine whether the person is in the country legally.

The resolution declares Los Angeles to be a "City of Sanctuary, protecting the human rights of all our residents".

Meanwhile, mayors in Boston, Chicago and elsewhere had already reaffirmed their cities as sanctuaries, and the California Legislature passed a controversial state law that aims to protect immigrants.

Officials in Los Angeles gave different explanations for the delay. Wesson spokesman Ed Johnson said this week an in email that "there was no particular reason" the resolution didn't come up earlier for a vote.

However, Cedillo said last fall that city lawyers wanted to ensure that the city wouldn't risk losing federal funding by adopting the sanctuary label. The Trump administration has repeatedly tried to withhold money from municipalities that it views as a so-called sanctuary city.

On Friday, Cedillo's office said the city wanted to vote on the declaration when an accompanying ordinance focused on human rights was closer to being passed.

That ordinance, which has passed in committee but hasn't been taken up by the City Council, would strengthen city laws related to discrimination, including over an individual's citizenship status.

Urging his colleagues to adopt the city of sanctuary label, Cedillo on Friday cited Trump's presidential bid, saying that "seldom in the history of this nation has a presidential campaign been launched with such hate, such vitriol, such racism".

"We declare, for all those who have been under attack in this Trump era, that this city, this day, in this time, will be a city of sanctuary," Cedillo said. He added that people in Los Angeles would not be judged "by the color of their skin, not by who they choose to love, not by when they got here".

Mayor Eric Garcetti has long declined to use the term "sanctuary city" because he says it has no fixed meaning, a position that angers some groups.

After the council members' introduction of their resolution in 2017, the Los Angeles Times asked Garcetti spokesman Alex Comisar whether the mayor would support using the "city of sanctuary" phrase.

"The mayor is not focused on labels, he is focused on making sure that L.A. is always a city that protects the rights and dignity of immigrants," Comisar said.

Garcetti, who recently decided not to run for president in 2020, endorsed the council's action Friday "because it supports L.A.'s longstanding practice and policy of building trust between LAPD and immigrant communities in order to keep all Angelenos safe", said his spokeswoman, Andrea Garcia.

Ira Mehlman, spokesman for the Federation for American Immigration Reform, was surprised Los Angeles officials took this long to take the symbolic, but politically advantageous step, of declaring the city a formal sanctuary for immigrants who are in the country illegally.

"I just assumed it already was one," he said. "Next they're going to declare the Earth is round."