Los Angeles: The mystery of what sparked teenagers Bryer Schmegelsky and Kam McLeod to go on their killing spree and what led to their own deaths in wilderness in Canada's remote north could soon be revealed.

The Royal Canadian Mounted Police will make an announcement on the case on Tuesday (AEST). 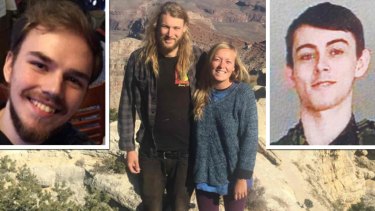 The RCMP were tight-lipped about what the announcement will be, but autopsies are believed to have been completed on Schmegelsky and McLeod and an item of interest was found near their bodies.

Schmegelsky and McLeod, both 19 from Vancouver Island, are suspected of shooting dead Australian tourist Lucas Fowler, 23, and his North Carolina girlfriend, Chynna Deese, 24, after the couple's van broke down on a British Columbia highway on July 14.

Four days later on another BC highway Schmegelsky and McLeod were accused of murdering 64-year-old botanist Leonard Dyck, stealing his Toyota RAV4 and driving it 3000km east across northern Canada until dumping and burning the vehicle outside the small town of Gillam, Manitoba.

A massive manhunt was launched in the area.

It ended last Wednesday when the fugitives were found dead in thick scrub 1 kilometres from the banks of the Nelson River, near Gillam.

The RCMP has not revealed how Schmegelsky and McLeod died or what the item found in the vicinity was.

The announcement follows the airing on Sunday of 60 Minutes’ interview with Schmegelsky’s father Alan, who apologised to the families of the victims.

Mr Schmegelsky, however, was shown cheering and saying "kudos, boys" when told during the interview the teenagers had successfully passed through a police roadblock.

He said the breakdown of his marriage led to his son becoming "angry".