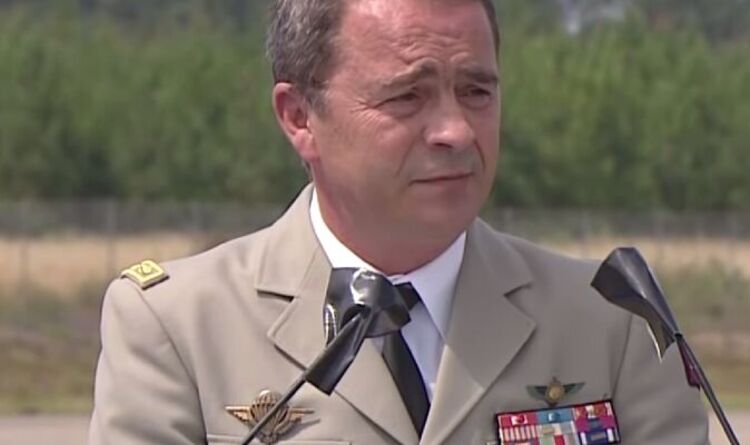 The head of France’s military intelligence agency has quit over a failure to predict the war in Ukraine, several media outlets reported on Thursday, citing unidentified sources and an internal email announcing his departure.

According to reports, he was blamed for “inadequate briefings” and a “lack of mastery of subjects”.

It is unclear whether the General is resigning or is being fired.

The Defence Ministry did not immediately respond to a request for comment.

Eric Vidaud had led the military intelligence agency for seven months but sources told the l’Opinion newspaper and other media that the army had judged his briefings “insufficient” and he lacked “mastery of the subjects”.

The chief of staff of France’s armed forces, Thierry Burkhard, had told Le Monde this month that French intelligence had, unlike their US counterpart, failed to predict Russia’s invasion of Ukraine.

Mr Burkhard told Le Monde: “The Americans said the Russians were going to attack, they were right. Our services rather thought that invading Ukraine would have a monstrous cost and that the Russians had other options.”

L’Opinion said Mr Vidaud was told on Tuesday that he would have to leave his post in the summer because of the misses over Ukraine and that he decided to step down immediately.

“Maybe there should be similar consequences for those in UK & US systems who last year predicted the Afghan government could hold its own against the Taliban, & thereby generated the chaos of the Kabul evacuation.”

Mr Vidaud’s failure came as an even bigger embarrassment for Emmanuel Macron and his government as the French leader had held multiple phone calls with the Russian President in the days leading to the invasion.

On Wednesday, the French President was forced to backtrack from his pledge to evacuate thousands of civilians from the Ukrainian city of Mariupol.

Mr had promised an “exceptional humanitarian operation” last week as he pledged to speak to Putin to agree to a ceasefire for the shelled city.

He told reporters at the end of an EU summit on Friday: “We are going to launch a humanitarian operation in conjunction with Turkey and Greece to evacuate all those who wish to leave Mariupol.”

He added: “I have a very special thought for the residents of Mariupol who are going through one of the greatest dramas,.

But the French leader was forced to concede the evacuation is not possible “at this stage” after he spoke again with Putin on Tuesday.

Russia calls its assault a “special operation” to disarm and “denazify” Ukraine. The West says it launched an unprovoked invasion.

On Tuesday, Ukraine reacted with scepticism to Russia’s promise in negotiations to scale down military operations around Kyiv and another city as some Western countries expected Moscow to intensify its offensive in other parts of the country.

Talks took place in an Istanbul palace more than a month into the largest attack on a European nation since World War Two that has killed or injured thousands, forced nearly 4 million to flee abroad and pummelled Russia’s economy with sanctions.

The invasion has been halted on most fronts by stiff resistance from Ukrainian forces who have recaptured territory even as civilians are trapped in besieged cities.